“Left-Lane Hogging” Is The Result Of Extreme Speed Differentials
LOGIN
Thursday, February 2, 2023
Top Posts
Elizabeth Clare Prophet Claimed To Be ‘Clairvoyant’
What’s Up With the Nazi “Black Sun” Rune Wheel?
The Eightfold Path of Denial of Death
Miss R*EVOLutionaries: Panel Discussion
Why I Left The Radical Secular Podcast
Money Is Not A “Shared Fiction”
Beliefs About God Won’t Make You Moral
This Is Not Fine!
The Most Consequential Social Difference Between American Christians And Atheists
Is Something Unclear About What’s Wrong With America?
SUBSCRIBE
Archive 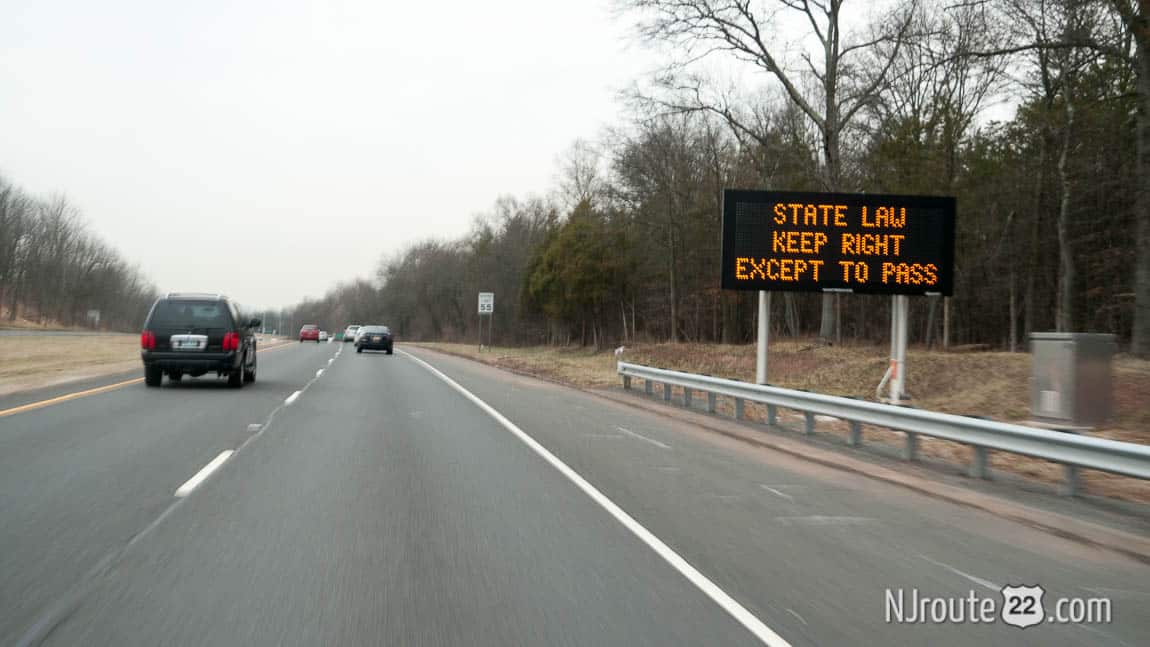 In early 1950s America, a four-lane highway with two lanes in each direction was a luxury. The Interstate Highway System didn’t exist yet. It was commissioned by President Dwight D. Eisenhower in 1956. So most four lane highways were brand new, and always under construction. I remember in the late 60s, and early 70s being on cross-country road trips with my dad. We still encountered many parts of the Interstate system that had long stretches of bumpy two-lane roads connecting the incomplete network. On those trips I always felt better when we got back to the smooth double-lane ribbon. It felt like the future. The old roads felt primitive.

Most drivers in that era were used to the Route-66-style two-lane highways that crisscrossed the US, and had been the only way to travel by automobile from coast to coast. On two-lane roads, overtaking another automobile is controlled by solid vs. dashed lines, indicating sufficient visibility. Still, passing on a two-lane road is always a white-knuckle experience. The price of bad judgment is a head-on collision. Having two clear lanes in each direction was revolutionary, and much safer.

On the Interstate, my dad always taught me, “drive on the right, and pass on the left,” even when we had the road to ourselves. In many states, it’s the law. The insurance industry confirms that slow drivers in the left lane can cause accidents by impeding traffic and causing excessive lane-changes. This video explains the issue.

But it’s nowhere near as straightforward as this video claims. If everyone drove just slightly above the speed limit, and big-rig trucks didn’t drive well below the speed limit, the “keep right except to pass” rule might work.

But it doesn’t. Let me explain.

I’ve been driving for 42 years. The last time I wrote about road rage was 2002. So it’s time for an update. I was inspired to write it by a spate of dogmatic social media posts whining about people who cruise in the left lane. This is mostly bollocks!

I’m a veteran of countless road trips on Interstates 5, 10, and 15, between Los Angeles, the Bay Area, Las Vegas, Phoenix, and Salt Lake City. I know those roads like the back of my hand. Anyone who’s driven them will understand the harsh reality, which doesn’t conform to the neat anecdotes of conventional wisdom.

Big-rigs clog the right lane, moving at 55-60 mph. And there are a lot of them. Perhaps every quarter to half mile on busy days. If you’re driving in a passenger car, you’ll be driving somewhere between 10-15 mph faster than the trucks. This is the reality on the ground. No one except big-rigs follows speed limits on the Interstate.

If you try to stay in the right lane, you’ll end up slowing down even further, as big-rigs struggle on long grades. In order to follow “keep right except to pass,” passenger cars must make frequent lane-changes to get around slowpoke trucks. As in, once every minute or two. This is exhausting, and unsafe.

The only way to avoid these frequent lane-changes is to cruise in the left lane. Sorry folks. I’ve been called everything from a “creep” to an “asshole” for doing this. But it’s the only good option. I’m not a control freak who drives exactly the speed limit either. I’ll generally set my cruise control at 75-80, bumping it up and down as needed to stay in the flow of traffic. While not ideal, it’s the best overall compromise.

Without fail, other passenger vehicles, especially pickup trucks, will come roaring up behind me in the left lane at 85-95 miles per hour. They often flash their brights and sometimes also tailgate, and honk. This is not OK. It’s rude and dangerous.

I’ll always move over and let them pass, if possible. But if there’s a big-rig to my right, sometimes they have to wait. Sometimes there’s a whole line of big rigs and other traffic in the right lane, so the impatient driver will end up being stuck behind me for a few miles. Their assumption seems to be, that no one is ever supposed to be in the left lane at all, and that they should have the right to travel at any speed whatsoever, with a clear lane. This is obviously, egregiously false. Even if the left lane is only a passing lane, not everyone is going to pass at the same speed. Nor should anyone have to drive recklessly at more than 20 miles per hour over the limit to get out of the way of aggressive, chronically impatient drivers.

In the situation I just described, two laws are potentially being broken. In some states, I could indeed be cited for cruising in the left lane. The impatient driver could also be cited for reckless driving (going more than 20 mph over the speed limit). So which is worse?

It all depends on average speed. There’s no black and white answer. Sometimes everyone’s going 85+, and even the big-rigs are pushing 70. At that point, it would be rude to cruise in the left lane at the same speed as the trucks, creating a roadblock.

But if the flow of traffic is 75-80 with trucks at 65, it’s even more rude and dangerous for some joker to come flying up in the left lane at 90+ and expect everyone in front of them to get out of the way, immediately.

Right-Lane Driving Is For Suckers

Many people cling to “keep right except to pass” as a dogmatic, hard and fast rule. But the facts on the ground don’t support this position, in spite of what state law might say. You’re damned if you do, and damned if you don’t.

You’ll find avoiding the left-lane cruise extremely difficult in practice. Because if you’re not a big-rig driver, staying in the right lane is an awful, dangerous, and thankless experience. The extreme speed differential between right and left lanes makes it very easy to get trapped behind the big-rigs by speeding left-lane traffic.

This is why most passenger cars end up cruising in the left lane.

When you think about it, it just makes sense. As traffic increases on a given stretch of highway, we’d expect that each lane would handle about half the traffic. Artificially pushing people to the right slows everyone down and reduces total road capacity.

From Bad To Worse

Worse than clogging up the right lane, is when big-rigs pass each other. They don’t have much surplus power, so passing takes them a long time. Sometimes on busy days, just one instance of two big-rigs passing, creates large traffic backups.

We’ve all seen cars who camp in the left lane on long downgrades, ignoring the physics of an 80,000 lb, truck bearing down on them that might not be able to stop. Don’t do this! Also be sure to get out of the way of emergency vehicles in the left lane, even if you have to speed way up.

But private vehicles driving recklessly at insane speeds, are the biggest concern. Chronic speeders who insist on cruising at 85+ mph endanger everyone on the road. They’re the true cause of nearly all road-rage incidents in the left lane. And surprise, surprise, they have a ready made scapegoat to deflect blame from themselves–the slower left lane driver.

I often wonder if there’s any speed at which they’d admit fault? 100 mph? 110? The answer is: none. They refuse any accountability at all. Here’s someone on social media who had previously justified driving in the left lane at 110 mph, claiming that any slower left-lane driver would still be at fault.

This is a totally outrageous and lawless attitude. What do you even say to that? When I objected, the person called me a “creep” and blocked me.

What Can Be Done?

The ultimate solution to most traffic problems, will be autonomous vehicles. Human drivers are too susceptible to tragedies of the commons, where self-interested behavior that benefits a single driver forces all drivers to pay a penalty in either time or safety. Everyone has a different driving style, and when they conflict, it makes things worse for all of us. Bad driving behavior runs the gamut from lane-hogging, to improper merging, failure to yield, extreme speeding, cutting people off–you name it.

Since full driving autonomy is still many years away, what can we do in the meantime?

Stricter speed enforcement for people who drive more than 20 mph over the speed limit on the Interstate would be a big first step. Throw the book at ’em! Use traffic cameras mounted on bridges to enforce it. I don’t care.

Left lane cruising should be allowed in accordance with traffic flow, perhaps at a higher speed than the posted limit. Instead of pat slogans like “keep right except to pass,” we need wider acknowledgement of the complexity of driving conditions. Because driving between cities on the Interstate shouldn’t be a real-world game of Gran Turismo.