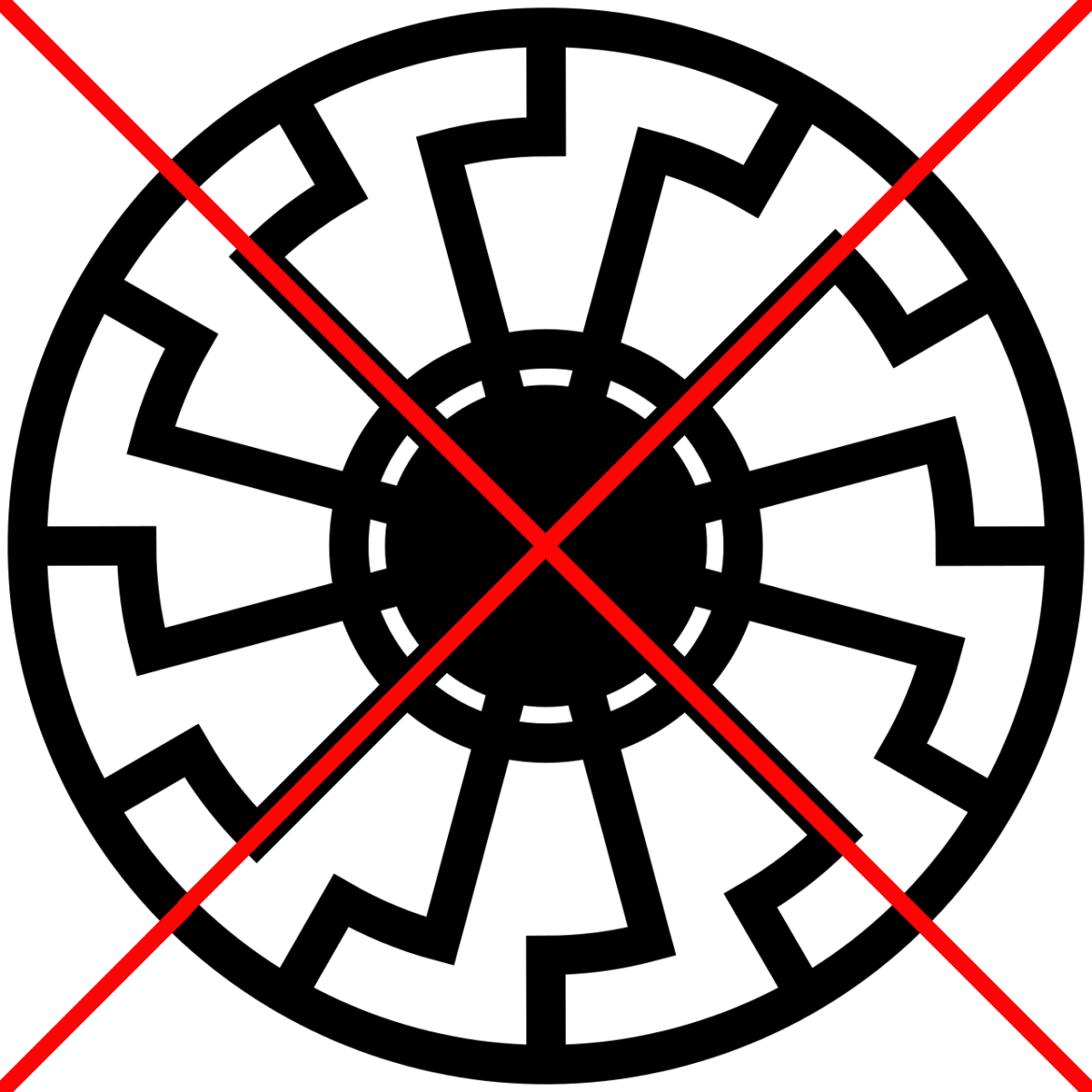 T he issue of the Nazi connection with the Black Sun symbol has come up frequently enough in private correspondence and conversation over the years, that it’s important for me to address it here in a forthright manner. It’s an extremely unfortunate coincidence. The description header for this blog states “Anti-theism · Anti-fascism · Climate action.” I couldn’t be more horrified that the German Nazis of the Third Reich co-opted this ancient occult symbol into their milieu of mystical claptrap they employed to create a fraudulent mythological basis for their ideology of genocide. And, true to form, neo-Nazis in the U.S. and all over the world (including in Ukraine) have also adopted this symbol in recent years. For this reason, I haven’t used the symbol on the blog at any time since I founded it in 2001. But I’m posting now with this article TO DELIBERATELY FUCKING DISAVOW IT.

My use of the term “Black Sun” came from my readings in psychology in the late ’90s, on the subject of the psychological “shadow.” Also, as I’ve previously mentioned, I was very much drawn to the song “Black Sun” by Dead Can Dance.

The title is taken from a song by Dead Can Dance from the album Aion. It expresses the existential pain of the unlived and unexplored life. We are the living dead if we don’t challenge the crushing weight of conventions that rule our lives. Our minds are the most ingenious prisons ever designed, and by our unquestioning acceptance of the social order, we have slammed shut the prison door.

I don’t have the antidote to existential pain, or any particular answers to the BIG questions of life. But I have developed the willingness to question all prior assumptions. My rule is: the more something is taken for granted by large numbers of people, the more it needs to be examined and questioned. Tyranny of the majority is no better than tyranny of despots. It is just more accepted and easily tolerated, the iron fist in a velvet glove.

I know this explanation won’t satisfy some people, and I suppose that’s just too damn bad. There are actual Nazis on the rampage again, and I’m not letting their continued use of this symbol or concept taint what I plan to do. Which is to oppose every flavor of fascism, with every breath I have remaining to me. Can I say it one more time? Fuck Nazis!!!

The Meaning of Black Sun

The name “Black Sun Journal” refers strictly to this blogs’ approach to intellectual, political, and psychological inquiry. Themes hidden or underexplored in the mainstream culture or media are emphasized here. Black Sun refers to shedding light on the darker side of human nature. It also refers to taking an inverted, uncommon, but not necessarily negative, viewpoint on the issues of the day.

The heading “Black Sun Journal” works for the energy transition too, since industrial pollution often threatens in some parts of the world to “black out the sun.” It is also a workable metaphor for “black” oil and fossil fuel dependency and the wide shadow that has cast on modern civilization. In another considered play on words, global warming causes a growing menace to human society, giving a black quality to the sun, which has traditionally been humankind’s source of life and even its object of worship.

Personally, the name has high value to me. In my journey through life, there have been many dark nights of personal or existential crisis. I’m sure there will be many more in the years to come. We all have them. Some try to escape or develop coping mechanisms in any way they can. (such as antidepressants, overwork, not admitting it to oneself, etc.) For me, every such crisis presents a further opportunity to develop an interior light to guide my way, free from the need for external crutches or rhetorical devices (such as: religion, following leaders, not thinking about death, or false hopes of an afterlife) to pull me through. Some of my writings are based on my struggles. What others might see as too much self-revelation, I view as saying what others may be thinking.

BSJ is also about individualism. I consider one of the best things about life to be friends and family. They are simply irreplacable. Life would not be worth living without them. Sometimes they fail us, however, or have their own needs which do not include us. As Ian Anderson once sang “…put your bet on number one, and it comes up every time…” We are born alone, and we will die alone. So we must be prepared to take care of ourselves. Relying on others with no plan B is a guaranteed offense to Darwin, and he will (metaphorically) exact a heavy price. In my view, a large majority of the world’s problems are caused or exacerbated by collectivism of one sort or another. The oldest and most powerful metaphor for this is the “Tragedy of the Commons.” Strong individuals build strong businesses and strong communities. Strong individuals radiate an example of self-reliance for others. This is not necessarily a “black” radiance–but it IS contrary to what we are taught by most authorities from kindergarten on–that to be good citizens we should put others before ourselves.

Writing this page would be hypocritical if I didn’t acknowledge individualism’s “black” side. A few examples are amorality, bigotry, narcissism, hubris, abuse of power, manipulation, greed, corporate externalities, and dictatorship. As with corporations, checks and balances on individualism must come from without. Each individual or corporation should strive to advance itself as strongly as possible, and society must design a balanced approach and legal framework for managing the ensuing conflict of interests. i.e. if corporations have become too powerful, it is not the fault of the corporations, who are doing what they are designed (and required by their customers and shareholders) to do–it is the fault of the government for not implementing stronger regulations.

One last play on words has to do with the social structure I was born into. At one time in my life, I was a “favorite son” in my parents’ church organization, expected to eventually assume leadership. I did briefly take on the role of a minister and Vice President of the organization. When I left, many people who were still involved thought of me as having become a “black sheep” and a few have continued vicious verbal attacks over the years. I haven’t paid much attention to the naysayers, but I’ve never much cared for the idea of being thought of as any kind of sheep. Sheep are mostly docile and follow others. Hence in my mind, “black sheep” became “black son” became “Black Sun.”

Hah! And all this time I thought it was a nod to the French psychologist Julia Kristeva, author of “Black Sun.”

“That is perhaps what we seek throughout life, that and nothing more, the greatest possible sorrow so as to become fully ourselves before dying.”
-Celine, Journey to the End of Night

I am another Black Sun.

It is amazing… no reunion, but you are being reunitied.