This Is Not Fine!
LOGIN
Monday, December 5, 2022
Top Posts
What’s Up With the Nazi “Black Sun” Rune Wheel?
Elizabeth Clare Prophet Claimed To Be ‘Clairvoyant’
The Eightfold Path of Denial of Death
Why I Left The Radical Secular Podcast
Miss R*EVOLutionaries: Panel Discussion
Money Is Not A “Shared Fiction”
Beliefs About God Won’t Make You Moral
This Is Not Fine!
Wealth Concentration Leads to Feudalism
Is Something Unclear About What’s Wrong With America?
SUBSCRIBE
Archive

Home Fascism This Is Not Fine! 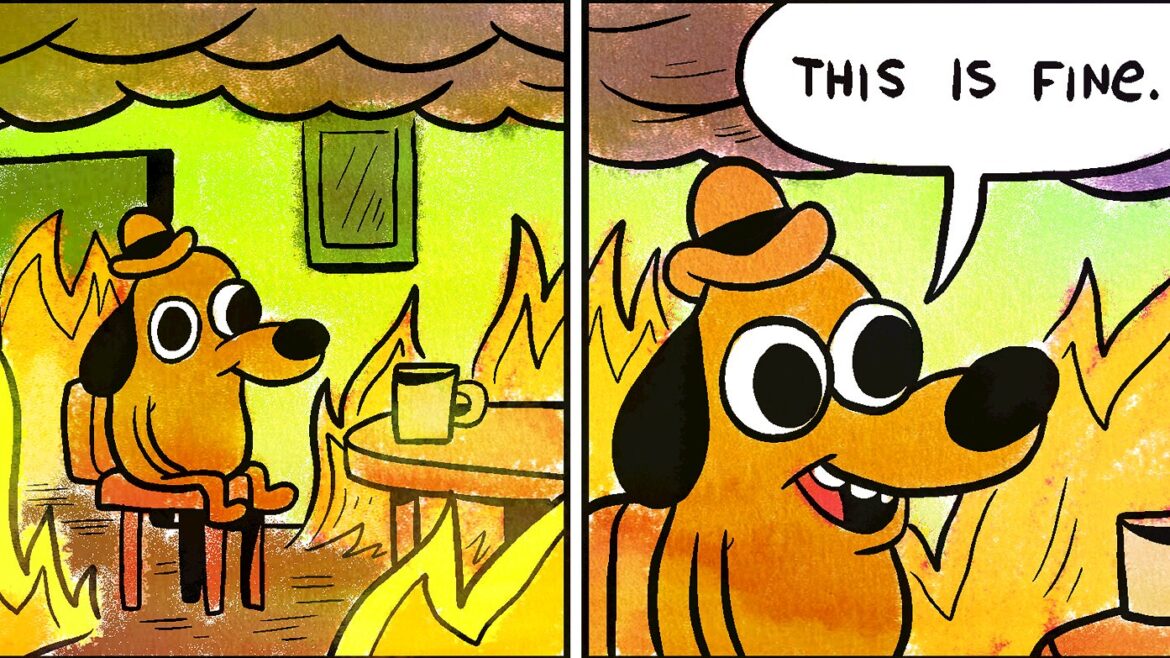 Fascism presents its greatest risk to historically marginalized communities such as women and “minorities” and LGBT. But there’s also a grave risk to majority allies. Let me explain how this works:

Fascism historically takes root, not merely when minorities gain power, but when the controlling majority begins to feel that they are losing power. This fully explains the “mystery” of “Obama-Trump” voters.

In 2008 and 2012, the white majority did not feel substantially threatened. At least not in a palpable way that would have dissuaded many white voters from casting their votes, twice, for America’s first black president.

And President Obama wasn’t some lefty radical, either. He governed largely as a centrist, especially since the bulk of Democratic legislation proposed during his presidency died in the Senate. But the perception that was built by the GOP noise machine (aided by foreign propaganda) during his presidency produced a furious white backlash. It’s impossible to overstate the impact to many white people’s self-perception of dominance in society, of having a black president serving for 8 years. Awful and incredible as it might seem, a lot of white people felt like their way of life and culture were under siege. And that narrative was amplified and pounded into people’s brains relentlessly by the open sewer of right-wing media. And it served the wealth agenda, perfectly. It provided the best opportunity in 50 years to roll back all the democratic progress of the 20th century, and then some.

For the first time in 2016, many white Americans could see multi-cultural equality approaching on the horizon. Trump expertly channeled this white extinction anxiety, aka The Great Replacement, (Which was extolled in part by a French theory and book about Muslim immigration in Europe), and rode its coat tails into the White House.

National disaster followed. A culture of insults and lies. A botched pandemic leading to a million deaths. Epic corruption. And the failure of the peaceful transfer of power in 2021.

Flash forward to the present. An extreme right-wing court, and republican state legislatures now threaten democracy itself. The right has now pushed its structural advantage in an attempt to delegitimize future elections–in perpetuity.

In the near term, this portends a government that’s not functionally accountable to the electorate. It matters not so much whether every vote counts, if only one party gets to count the votes. And that’s the situation that’s being set up for the 2022 midterms, 2024, and beyond. We discussed this at length in our Jan 10 episode “Attack From Within.”

It means that even if a multi-racial coalition committed to social justice remains the majority, that majority isn’t likely to be reflected in the halls of power. And that means in turn, that a white minority is poised to not only roll back civil rights gains since the 14th amendment, but also to erode many of the basic freedoms and checks and balances guaranteed in the Constitution and the Bill of Rights. These include separation of church and state, of course. But not far behind will be the fall of press freedoms, right to assembly, right to privacy, habeas corpus, and other guarantees we used to take for granted.

As freedoms are curtailed, past a certain point, a fascist government cannot tolerate dissent. As the screws tighten, oppressed populations (which will be all of us) take to the streets. Journalists expose the horrific impacts of the loss of freedoms, and this leads to substantial resistance both on the ground and in any remaining voting booths.

As we already saw with the BLM/George Floyd demonstrations, the reaction of many states was to criminalize protest. Dramatically increasing fines for property damage, and passing laws that would allow motorists to run down protesters in the street. Right wing media labeled protesters “communist,” “anarchist,” and “antifa.” Vigilante justice is also on the upswing, as exemplified in the exoneration of Kyle Rittenhouse for his murder of two protesters and the wounding of a third.

Notably, the murdered protesters were both white. And this is really the subject of this post. The stiffest resistance to a fascist takeover often comes from white and/or male allies of marginalized groups, because of their relative power/privilege. And so these people will at some point become primary targets. My name’s on that list.

We’re still some distance away from journalists and truth-tellers being “disappeared” in the night, never to be seen again. But without democratic accountability, that’s definitely coming to the United States of America—if we don’t stop this decline, and soon. Anyone who’s ever had experience with a fascist government knows that this kind of crackdown has happened in every instance. Because oppression depends on removing the levers of accountability. From the voting booth, to the media, to the courts, to the street: Dissent cannot be tolerated.

Just within the past week, the government of Kazakhstan ordered its security forces to fire on peaceful protesters. And they killed dozens to hundreds of people. This coming oppression is real and deadly, and all the signs are showing that it will happen here.

So my motivations for being an anti-fascist working toward social justice are manifold. Of course I care about the rights of marginalized people. I fucking care! When I hear about injustice happening to a black or brown person, a woman, or LGBT, my empathy means that it feels like it’s happening to me. I don’t distinguish between pain felt by people who look like me, vs. pain felt by people of a different skin color, gender or group identity. Pain is pain. Injustice is injustice. What happens to one of us, happens to all of us. And I hate seeing injustice, more than I hate anything else in this world.

But this is also about self-preservation. Because once a person like me has become publicly identified as an anti-racist and anti-fascist, I have a target on my back, as a “race traitor” and “communist” or worse, maybe even a “traitor” to my country. America Uber Alles includes an America where white liberals will undoubtedly face the same persecution and violence as marginalized people previously have, throughout our history.

The desperation I feel over this situation sometimes leads to me using unexpected gallows humor to break the tension. We’re not stopping this. We’re failing to take it seriously. And we’re all at risk. As I heard myself say the following words in a bout of acidic irony, it shocked me anew how raw and awful our current situation has become, that would cause these words to come out of my mouth, direct from the depths of my deepest fears:

“So yeah, I guess marginalized people are just going to be oppressed. Yeah, maybe if we just stopped caring about all the things we care about, I guess it would be FINE.“

Yeah. FINE. Like the dog sitting calmly in a burning kitchen, drinking coffee. FINE like Auschwitz was fine. FINE like Hiroshima. The absurdity of totalitarianism and the depravity of war and genocide breed the darkest humor:

“We pretend to work, and they pretend to pay us.”
“The beatings will continue until morale improves.”
”What’s it like living under a totalitarian regime? Oh, you know, can’t complain.”

The 20th century gave the world plenty of fodder for developing this kind of wicked sarcasm into high art. In societies where truths can’t be openly told, pitch-black humor remains the last bastion of humanity.

In the face of looming oppression, bitter irony becomes the sharpest way to express the painful truth. Which is that absolutely none of this is fine! It’s heinous. It’s frightening. It’s despicable. I’m outraged about the danger we collectively face. And more than a little bit scared.