America’s On A Path To Even More Mass Shootings
LOGIN
Sunday, December 4, 2022
Top Posts
What’s Up With the Nazi “Black Sun” Rune Wheel?
Elizabeth Clare Prophet Claimed To Be ‘Clairvoyant’
The Eightfold Path of Denial of Death
Why I Left The Radical Secular Podcast
Miss R*EVOLutionaries: Panel Discussion
Money Is Not A “Shared Fiction”
Beliefs About God Won’t Make You Moral
This Is Not Fine!
Wealth Concentration Leads to Feudalism
Is Something Unclear About What’s Wrong With America?
SUBSCRIBE
Archive

It's the guns, stupid 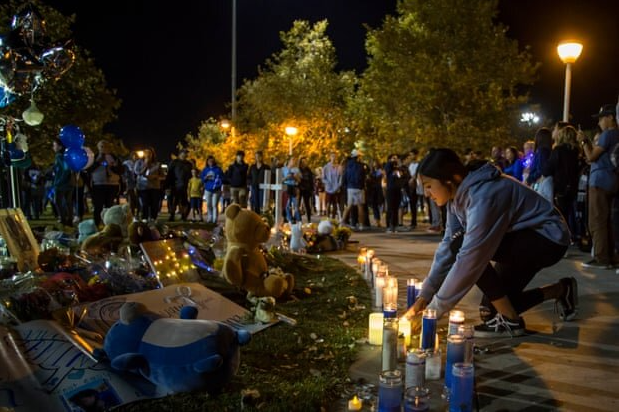 A random guy in Phoenix today, just decided to take a drive and shoot people.

But it could have been any city, any workplace, any neighborhood on any given day. How many unstable fucking idiots like this live near you, who might just decide one day to go out in a hail of bullets? This is the “new normal” in the US. And it’s anything but normal.

We just passed the fifth anniversary of the nightmare slaughter of 50 people at the Pulse nightclub. Nothing changed since then, except gun laws got even weaker. Now we have shooting sprees on a daily basis. This can’t and won’t end until enough Republicans get shot to make them snap out of their insanity. And that would take a lot–way, way too many. Remember, deaths from Covid have been dramatically undercounted. By looking at the expected annual per capita deaths over the last five years, we can see that rather then the official death count of around 600,000 the US death toll is actually far higher. Possibly a few hundred thousand higher—in the range of a million. And for a lot of Republicans, even their friends and family dying didn’t move the needle on wearing masks or getting vaccinated.

So if you think there will be some magic threshold, beyond which Republicans will change their hearts and minds on gun policy, don’t hold your breath. Even people who have lost children to the Gun God™ almost always double down on their “Second Amendment rights.”

They value their guns more than their children

This isn’t an article where I try to convince anyone to change their minds on gun ownership. It’s all already been said. America has decided. We know the statistics. We know that other countries don’t have America’s level of gun crime. We know that having a gun in the home represents a 300-400% increase of the likelihood that someone in that home gets shot. We know that self-defense with a gun is almost always a fantasy. We know that having a “good guy” present at a shooting is just as likely to result in even futher carnage, since no one knows who the “good guy” even is, when bullets are flying.

The academic studies have been done, too. The sociology of gun violence is well understood. So we have to conclude that the carnage is intentional. If Republicans wanted to stop mass shootings, they know exactly what has to happen. And they refuse. So every mass shooting can be considered a planned massacre.

If you read any in-depth analysis, such as Thom Hartmann’s book, The Hidden History of Guns and the Second Amendment, you will also be forced to conclude that widespread gun ownership is a major plank in America’s long-term history of white supremacy.

In other words, this plague of gun violence will never end until every single republican is voted out of office, federal, state and local. And until we Democrats gain the political will to take all 400 million guns off America’s streets. At this point, I’m not interested in discussing half-measures. The Second Amendment was written to allow the formation of a National Guard, composed of private citizens, so that the government wouldn’t have to pay for a standing army in peacetime. It was also understood that these “militias” would compose the slave patrols.

Now we have an official National Guard under the control of state governors. There is no justification for “private militias.” The whole thing is a farce.

At this point confiscation is the only possible cure. People should have to prove they need access to a gun for a purpose relevant to public safety. Any other excuse for gun ownership needs to be denied. A possible exception would be for hunting, sport shooting and defense of wilderness or ranch property from wild animal predators. But not for ordinary citizens living in cities. The insanity must stop.

And that won’t happen without a complete political sea-change in this nation. That won’t happen without a new Supreme Court. Which won’t happen for at least a decade or more. And not at all, if Democrats don’t reclaim control of the government at the federal, state and local level. I don’t know if we’re up to it as a nation. The evidence is in: Those in power don’t care about life, liberty or the pursuit of happiness anymore in America. They care about guns and preserving hierarchy.

And we prove it every single day that we tolerate the intolerable.

Republicans knew that selling this many guns, to this many Americans, would eventually result in mass carnage. And they laughed all the way to the bank. All the way to their Klan meetings. Because despite the Second Amendment, black people really don’t have the right to bear arms. They can try, but they just get shot. The NRA refused to defend Philando Castile—who was shot by a cop, even though he had a gun permit—because he was “in possession of drugs.” And ain’t that ironic? Since the War on Drugs was also targeted at black Americans?

Carnage was always the plan

A 1996 law sponsored by former U.S. House Representative Jay Dickey (R-AR), called The Dickey Amendment, curtailed government research into gun violence as a public health issue. What were Republicans afraid we might learn? That weak gun laws were dangerous to our society? Since the government couldn’t study gun violence, we’ve learned less than we should have. But the proof is in the results. More gun sales have led to more shootings. It doesn’t take any kind of multi-million dollar study by the CDC to establish this incontrovertible fact.

So what do Republican lawmakers and judges do? Ignore the science. Ignore the evidence and loosen gun regulations further. Strike down even the gun laws that we already have. Texas just dramatically loosened its gun regulations, yesterday, in the wake of a record number of mass shootings this year. A judge just overturned California’s assault weapons ban a few days before that. How can this not be an intentional, coordinated effort on the part of republicans to promote mass slaughter? It seems preposterous, but that’s what’s happening. Having exhausted every other possibility, we must conclude this is absolutely intentional.

Their strategy is: Keep people living in terror. Tell them the solution is that they need to arm themselves (which is what they want to do anyway), and they’ll keep voting red, and buying more guns and ammunition. MAGA! It’s a death cult, as I’ve said on many occasions. Republicans want a feudal state with the wealthy in charge, and pure suffering and mayhem for everyone else. They want white people to have weapons to enforce their place at the top of the social hierarchy. And they want you to go to “heaven” ahead of schedule because the religious right consider their lives to be only a “dress rehearsal” for something much more important. These are the only possible explanations. Actions speak louder than words.

The next escalation by right-wing terrorists cannot help but be coordinated assaults, with multiple shooters killing hundreds. It’s the only thing left that hasn’t happened. I’m not wishing or hoping for this, but I fear there’s no stopping it. Weak gun laws have created an internal armed force with no civilian political control or accountability whatsoever. There’s a militia, alright, but it’s not regulated. So don’t be surprised when that illegitimate armed force attacks you or your family–or even your entire town.

In America, no one is safe any longer in their neighborhoods, at the grocery store, in church, at a theater, in your car, at a restaurant, at a club or concert–anywhere. Your life now depends on every nutcase in your area deciding not to shoot you on a given day. As for Republicans, when their political strategy is terrorism, it’s essential to keep ratcheting up the fear. It’s a complete disgrace. I don’t know whether to keep calling this situation a “civil war” or not. There are guns, and there is killing, to be sure. “Civil war” is such an overused term. Our politics is already war by other means.

But whatever you might call this state of affairs, it’s not a civil peace.