There Was Never Any Other Possible Outcome
LOGIN
Monday, December 5, 2022
Top Posts
What’s Up With the Nazi “Black Sun” Rune Wheel?
Elizabeth Clare Prophet Claimed To Be ‘Clairvoyant’
The Eightfold Path of Denial of Death
Why I Left The Radical Secular Podcast
Miss R*EVOLutionaries: Panel Discussion
Money Is Not A “Shared Fiction”
Beliefs About God Won’t Make You Moral
This Is Not Fine!
Wealth Concentration Leads to Feudalism
Is Something Unclear About What’s Wrong With America?
SUBSCRIBE
Archive

Home Current Events There Was Never Any Other Possible Outcome 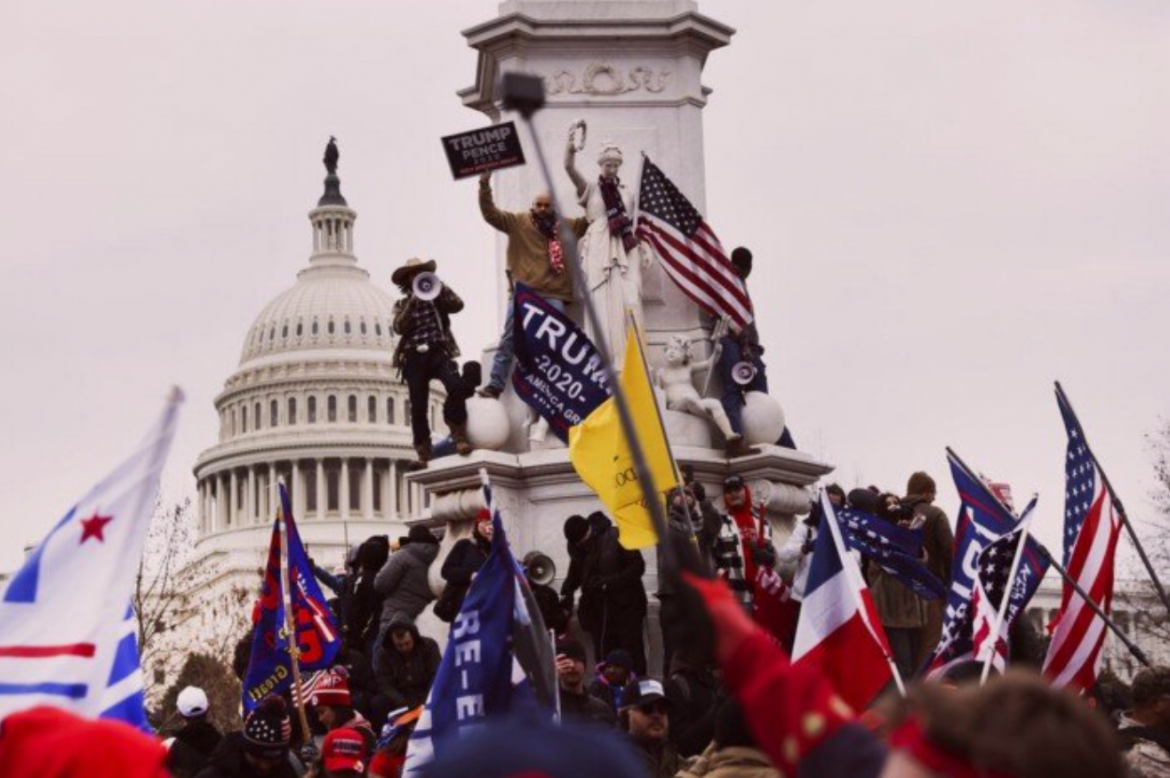 Tankers full of ink, digital and otherwise, have been spilled worldwide, about the traitorous, lawless thug Donald J. Trump. Over the past four years, he has sullied the office of President of the United States in countless ways. Now, at his specific urging, an armed mob attacked the seat of our government, and American blood was spilled inside our Capitol building.

Warnings and advice from America’s best experts in all fields, about the dangers of Trump’s incendiary behavior, were ignored for years by many Republicans, in favor of Trumpiness — an end in itself — and “making liberals cry” at all costs.

Make America Great Again? Is anything about this great?

Petulance has replaced any concept of greatness for about a third of the American population. There’s really not much more that can or need be said about Trump’s character, or the character of his followers. His ignominious place in history is secure, among the greatest despots of all time. He has brought a nation to its knees. He’s guilty of genocide by neglect, and crimes against humanity. Chief among his crimes, and underlying all others, has been his continuous assault on the truth. Followers of his cult have been complicit, every step of the way.

The national disgrace that occurred at our Capitol during a joint session of Congress, interrupted the process of our peaceful transfer of power. But this should have come as no surprise. The arsonists have been inside the edifice of our government since Trump promised to end “American carnage” in his inaugural speech on January 20, 2017. And their predecessors were there long before. Trump is the carnage. They have been the carnage.

The chief lie that persists within the Republican Party is that their policy can somehow be separated from the seditious, violent actions of the insurrectionists. Republican complicity in the Trump era is a combination of extreme cynicism in pursuit of power, dissembling, and outright denial of the true Republican agenda: Which has been an unbroken 40-year crusade to delegitimize government. To delegitimize democracy.

And make no mistake, repeatedly asserting “election fraud” without clear and incontrovertible proof, is the essence of delegitimizing democracy. Especially when every single Constitutional authority has dismissed the election fraud allegations, and at least 60 out of 61 lawsuits. There’s a process for challenging election results, and that process has been fully and completely exhausted.

Our nation is not even its people. Our nation only exists because of mutually agreed-upon laws to which we all subordinate ourselves. And that word “all” applies to the President of the United States, more than anyone. The attack on our buildings on January 6, 2021 was of far less significance, than the ongoing 40-year attack on our system of laws.

The true insurrection against our laws and duly-elected government began long, long before this administration, and long before today’s deplorable events. It began, in fact, with Ronald Reagan’s cry in the 1980 election to “get the government off the backs of the great American people.”

What does Reagan’s statement even mean? Doesn’t that statement ultimately imply that government is illegitimate? Isn’t this a core statement against the idea of a social contract? Isn’t this an implication that living in a nation of laws is onerous by its very nature, and to be fought? Isn’t this a denial in the ultimate sense that any of us are bound to follow the law? And isn’t it a dog-whistle statement that people can flout the law just because they may not like or agree with it? The question is: Why do people who hate our government and want to destroy it so much even run for office?

This is where it all started. Since Reagan’s shot across the bow of our ship of self-government, the Republican party has increasingly turned to deception, skullduggery, billions of dollars of dark money, and bad-faith procedural machinations. Finally in the past two months, they turned to sedition — in pursuit of an authoritarian agenda to overturn a democratic election. And in a pinnacle of irony, they have posed as “small-government” libertarians, the precise opposite of what they actually are.

But let’s be clear, none of this would have occurred, without the participation of a cadre of — let’s not mince words — white-supremacist reactionaries at every level of our society. Right-wing media, evangelicals, Confederates, lost-cause dead-enders of all stripes. This is a group that can’t handle truth, science, or living under the rule of law. They can’t imagine themselves participating as equals in a multicultural society. They don’t believe in the American system, that both protects and binds its citizens to the law, whenever it binds them to our shared social contract. So they’ve created an elaborate alternate universe that preserves a double-standard and gives them privileged status. They’re trying to drag the rest of the nation with them, into their hole of ignorance and denial of who and what we are. Denial that they live in — and are bound by the laws of — a nation that includes, and must include, people they don’t consider to be a part of their culture.

The “War on Reality” being waged by this group began with the launch of right-wing talk radio in the late 20th Century, and it metastasized into cable TV, and mushroomed onto the burgeoning internet in the past two decades. Now, a solid 30–40% of Americans permanently inhabit that alternative universe. They are a substantial portion of the Republican base. Today the monster Republicans nurtured and created, finally came for them — and it came for our democratic-republican form of government.

To understand how we got here, let’s catalog who Trump has attacked during his campaign, and during his presidency. This is by no means a complete list:

Who has Trump catered to?

Politically it’s now clear that Trump has never been out for anyone but himself. He did not see himself as the President of a democratic-republican form of government. He did not see himself as a traditional leader of the Republican Party, as anything other than a mechanism for personal fealty. He saw himself as a one-man wrecking ball to destroy any institution or structure or law that would oppose the absolute exercise of his personal power. He saw every professional relationship with his subordinates as transactional — not in support of his conduct of his job as President — but wholly dependent on personal loyalty to him. Even and especially when that loyalty conflicted with the laws the President was elected to uphold.

The demand for personal loyalty led to a revolving door in his administration. Breach of loyalty was the only unforgivable sin in Trump’s mind, and that led to his staff and many heads of many government departments being transformed into a circle of toadies. Anytime any adviser tried to tell the President that anything he wanted to do was unlawful, did he uphold the law and thank that person for their counsel? Precisely the opposite. He tried to find a way to get away with it, regardless. So, many formerly good people were cowed into refusing to tell the President the truth, rationalizing that they would rather tiptoe around him, telling him what he wanted to hear, so that they could at least remain some kind of limited check on his power.

Instead, Trump pursued a scorched-earth policy with regard to anyone who crossed him. And increasingly that included countless former allies. Now, he’s lost many, many Republicans, he’s lost Fox News, and in the final blow, he lost his own Vice-President, Mike Pence.

Let’s talk about what could have happened, and did not happen. And thank our lucky stars.

This was no Reichstag Fire. But it could have very, very easily been. And if it had been, it would have been entirely the responsibility of the Republican party who watched this crisis build for four unbearable years. And they did so cynically, in pursuit of political power, with reckless disregard to their duties to protect and defend America’s laws and institutions.

America dodged a bullet today. There are still 13 days left before the inauguration. We’ll be in a very dangerous period until then. And this won’t end on January 20, 2021. Because there’s a lot of political energy still yet to be expended before the MAGA-cult burns itself to the ground.

If there’s any hope to be taken from this awful incident, it’s the potential awakening of at least a portion of the Republican Party. And the fracturing of that party. They’re going to be out of power for at least two years, which should lead to at least some measure of humility. But the rhetoric from the hardcore Trump cult won’t stop, because that’s how cults work. The right wing in this country sees itself as the extra-legal protector of a sort of Manifest Destiny for white, Christian, male Americans.

We cannot let that stand.

Until Americans confront our foundational problem of white, Christian, male supremacy, we’ll never again be safe in our own country.