America’s Slaughter of the Feminine
LOGIN
Sunday, December 4, 2022
Top Posts
What’s Up With the Nazi “Black Sun” Rune Wheel?
Elizabeth Clare Prophet Claimed To Be ‘Clairvoyant’
The Eightfold Path of Denial of Death
Why I Left The Radical Secular Podcast
Miss R*EVOLutionaries: Panel Discussion
Money Is Not A “Shared Fiction”
Beliefs About God Won’t Make You Moral
This Is Not Fine!
Wealth Concentration Leads to Feudalism
Is Something Unclear About What’s Wrong With America?
SUBSCRIBE
Archive

Home Bigotry And Racism America’s Slaughter of the Feminine

America’s Slaughter of the Feminine

Many men feel most insulted by being compared to women 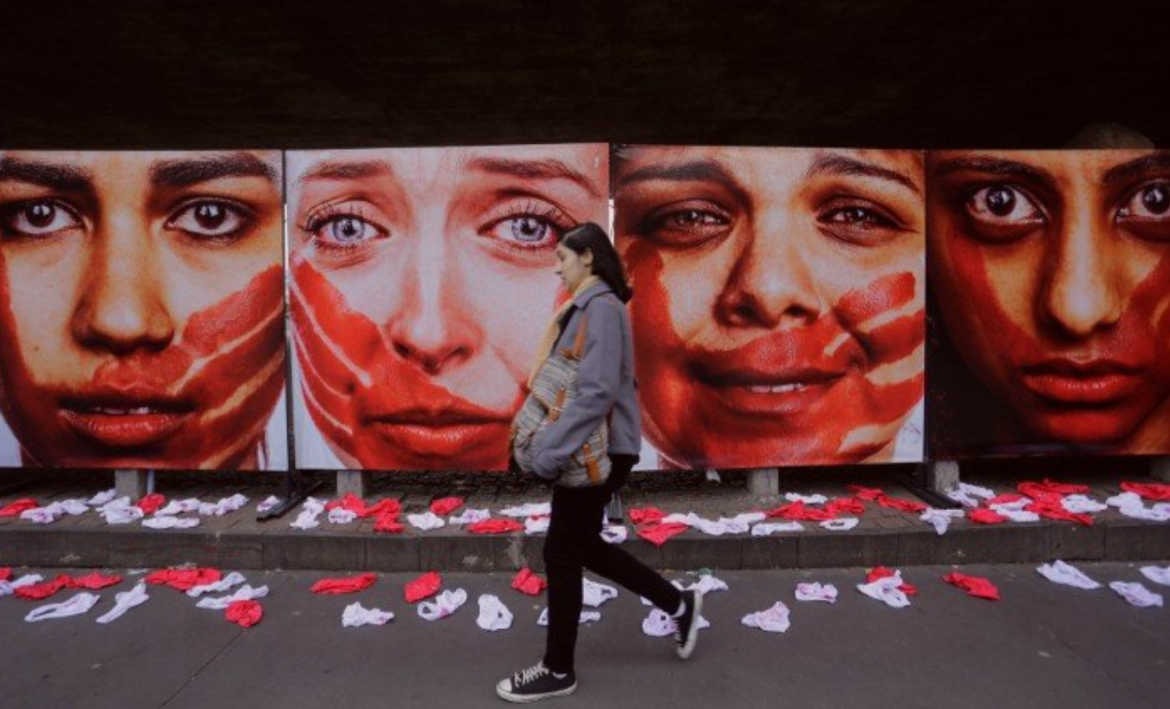 On the night of Trump’s election, I felt a creeping dread and a sense of despair for the loss of world civilization. It was as if every lesson we’d collectively learned, every advance we’d made, every hard-won morsel of knowledge, every bit of progress we’d enjoyed since the Enlightenment, was unceremoniously tossed in the trash bin, in an instant.
Some people extended the trash metaphor and labeled our situation a “raging dumpster fire” — which has proven more accurate than any of us would like to believe.

But consider the braying cackles of the white male at this ongoing disaster. Every conversation about solving America’s problem ends this way:

And anyone who objects to the corruption, the lies, the democide, or the racist and xenophobic violence of this so-called presidency, is labeled by these toxic wannabe alphas, as some derogatory term for the feminine.

Which brings us to the next insult, “cuck.” A cuck is a man who allows (by ineptitude or stupidity) “his” woman to be unfaithful. Or has a sexual fetish where he enjoys seeing “his” woman fucked by another man. The ultimate sign of weakness therefore, to the toxic males, is that they can’t own or control what they consider to be “their” personal pussy.

Think about this. These small men who have been willing to destroy our civilization, to retain control over women, actually believe that complete dominance over the (physically weaker) feminine makes them strong. It’s not only classic bullying, it’s the Faustian bargain that says to the wealthy and powerful, “we will agree to let you rule over us and screw us every day of our lives, so long as you don’t mess with our personal rule over women.”

And thus our nation has been destroyed.

If you’ve watched the excellent, horrifying series “Mrs. America” on FX, you understand how Phyllis Schlafly, one of the most powerful women in the history of American politics, single-handedly preserved this bargain. It’s must-see TV. And it also illustrates the willing participation of so many American women in the joint project of male pussy-ownership.

Equality is not an option. Justice is not an option. Both of these foundational principles of our nation are dismissed by toxic males (and their Stockholm-syndrome women), as “identity politics.” Which is ironic when you see the number of white males who live their entire lives as one big expression of white male identity politics. I’m referring to the constant macho displays of weaponry, large, noisy machinery, and surrogate symbols for white male supremacy.

The poster boys for the preservation of hierarchy are the men who display all three of these implied threats at once: The jacked up truck, the American / blue-stripe / Confederate flag, symbols of weaponry and death, in the form of the Punisher skull / 3% logos. What makes this even worse is that some of these dudes regularly act on their threats, murdering black people, gay people, trans people, and women.

A lot more of them would be doing this if they thought they could get away with it.

This is the fraudulent bill of goods the toxic male has been sold: That we must preserve his place at the top of the hierarchy, no matter what the cost to the nation. And anyone who opposes his dominance for any reason has become a traitor, worthy of death.

Slang used to describe males who completely and utterly lack all necessary masculine qualities. This pathetic state is usually achieved by an over-indulgence of emasculating products and/or ideologies.

The origin of the term derives from the negative effects soy consumption has been proven to have on the male physique and libido.

The average soy boy is a feminist, nonathletic, has never been in a fight, will probably marry the first girl that has sex with him, and likely reduces all his arguments to labeling the opposition as “Nazis”.

That brings me to the third insult, soy boy. Soybeans contain a form of estrogen (isoflavones), that consumed in sufficient quantities, are rumored to produce female secondary-sex characteristics in men. This has not been scientifically established. The intent of the insult “soy boy” actually goes deeper than the fear of “feminization,” to mocking any sort of civilized progress or substitutes for bloody, violent traditional male methods involving combustion and slaughter.

So if you drink soy milk, drive an electric car, care about animals, try to eat vegan or vegetarian, or participate in any kind of public health measure like wearing a mask — you might turn into a girl.

Think of how weak a man must feel, to believe that taking a drink of soy milk might turn him into a woman. Think of how pathetic a man must be — to be willing to risk contracting a deadly virus that would make him die alone — rather than wearing a simple piece of cloth across his face.

And this is the irony of the situation. Toxic, abusive men also tend to have a high incidence of mental health issues. Many have suffered bullying or abuse trauma themselves, and endured a lifetime of suppression of their feelings about that trauma. It might be something close to a universal law to say that every bully was once bullied.

And they have the fucking gall to call anyone pussies, cucks, or soy-boys?

Strip away all the weaponry and bravado, and toxic men are scared, and in pain.

And now they have brought the entire nation to its knees. They installed a president whose only redeeming quality was that he would be willing to destroy the nation to keep white males in control.

It’s a bargain so stupid and self-defeating, that we Americans might as well, all of us, be abused women, living under the tyranny of a toxic man who rules our household with his gun.

We are now all in fear for our lives. Toxic men let this happen. Toxic men are still cheering this disaster onward. They said we needed “hard men” to do our dirty work. They said we were too soft and civilized for our own good. They promised to defend us, but only if we let them retain their unquestioned authority. And now they have betrayed us. We will all be punished for daring to ask a question, like a female reporter doing her job at a White House briefing.

I have finally realized: That feeling of creeping dread that I had on the night of the 2016 election, that made me speechless for hours, that made me alternatively rage and weep, has now become America’s permanent reality.

It was such an awful feeling, it made me wonder how even an institution as corrupt as corporate America could have let this happen? Didn’t they have a self-preservation instinct? Didn’t they know their business would also be destroyed along with the nation?

How could they not know?

After the election, I still held out hope there was in fact some kind of “deep state” that would stop trump. That some “big boys” in corporate back rooms would find a way to keep him from wrecking us. Sadly, that wasn’t in the cards.

The ineptitude of toxic masculinity has taken the prize, and it’s now bumbled its way into murdering the American family, with 80,000 dead as of this writing. The next stage is when the toxic man, seeing the havoc he’s wreaked, knowing there’s no redemption, puts the gun to his own head.

We’re all now cowering, watching this cornered animal, watching this defeated bully flail and lash out, watching the train wreck he caused unfold. He’s powerless to stop it, even if he wanted to. He simply doesn’t have the capacity for introspection or the remorse required for course correction. He doesn’t have the humility to do anything other than whine and moan about how unfair it all has come to be. “Treated worse than Abraham Lincoln,” he says.

We’re hoping there are still enough sane people left in America to hit the brakes. We hope against hope that we’ll have a fair election that will pull the switch and mercifully shift us back onto the right track. We fret amongst ourselves about Joe Biden — even while we’re in a hostage situation!

We also know that the very paragons of toxic corruption who are running this election, understand that this is their very last chance to preserve the male-dominant hierarchy.

They even call their campaign the “Death Star.” Forgetting that a band of rebels led by a woman blew up the Death Star — not once, but twice.

The toxic men know that once the sane, competent people get back into control, once women take their rightful place at the table, civilization will leave them behind. If we place women in positions of leadership, it’s an absolute stone-cold lock that toxic men will eventually be forced to give up their guns, and their meat, and their combustion, and their war.

That is, if civilization is to be preserved at all.

Toxic men have taken a look ahead at what civilization has to offer them, and en masse they’ve already decided that putting a gun to their own heads and pulling the trigger is a better outcome.

We are therefore all victims of femicide. We are all locked into this abusive toxic-masculine suicide pact. It’s not just Covid-19, or climate change that they deny.

They deny the very existence of civilizing, feminine accountability.

Anyone who cares about the future of human civilization must understand that we have now reached the point in our journey where only the recognition of the equality of women can save us from ourselves.

The measure of a man is not just to win or to dominate. It’s also to know when he’s in way over his head. To know when he’s played himself for the fool. To step aside, and let someone else save the day. That is the situation in which the American male finds himself. Will he have the courage to admit his mistakes? Or will he double down in a fit of murderous rage?

We’ve All Fallen For At Least One Conspiracy Theory

Race, Hierarchy, and Rule of Law