Why Talk To People Who Lie About The Economy?
LOGIN
Sunday, December 4, 2022
Top Posts
What’s Up With the Nazi “Black Sun” Rune Wheel?
Elizabeth Clare Prophet Claimed To Be ‘Clairvoyant’
The Eightfold Path of Denial of Death
Why I Left The Radical Secular Podcast
Miss R*EVOLutionaries: Panel Discussion
Money Is Not A “Shared Fiction”
Beliefs About God Won’t Make You Moral
This Is Not Fine!
Wealth Concentration Leads to Feudalism
Is Something Unclear About What’s Wrong With America?
SUBSCRIBE
Archive

Home Current Events Why Talk To People Who Lie About The Economy?

Why Talk To People Who Lie About The Economy?

Instead, use the one-strike rule 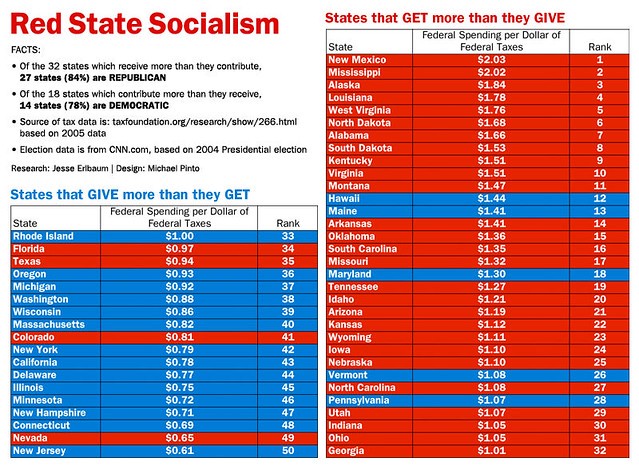 On Friday, April 24, 2020, tweeting, “Just give NY our money back,” Governor Andrew Cuomo threw down the gauntlet to Senator Mitch McConnell, who had stated Wednesday during a radio interview that he wasn’t in favor of a “blue-state bailout.”

Federal spending makes up about about a third of state budgets. As most Democrats know, the blue states have always subsidized the lower population red states by sending more tax revenue to the Federal government, than their states receive in federal spending. It’s not even close. Red states, as a whole, receive much more federal spending each year than their citizens and companies pay in tax revenue.

One of the biggest categories of federal grants to the states is Medicaid. Rural states also receive federal highway funds, and other infrastructure money, so that citizens of those states can enjoy something close to the same standard of living as those in more economically developed states. That’s why we are called the United States. It’s not just geography, but a legal and economic fact that we are one nation. To preserve the dignity of a nation, it stands to reason that the economically strong states should take care of the weak. And we do.

Governor Cuomo knows this and he very publicly threw that information back into the face of the lying hypocrite Senate Majority Leader Mitch McConnell. Elected to the Senate in 1984, McConnell can in no way plead ignorance of federal versus state budget allocations. He’s spent nearly 40 years dealing with those numbers.

I don’t really care why McConnell is lying about this. But I do care about the consequences for Americans. Part of his strategy for denying states money to cope with the Covid-19 crisis, is to drive them into bankruptcy. Then he wants to release the money. That would further the Republican goal of using this crisis to destroy public sector unions in blue states, by using the process of bankruptcy to declare their pension obligations null and void.

We’re talking about stealing money out of the pockets of millions of American retirees who did everything right and played by the rules. Such a public fight is damn well worth having, and that’s the only place such a fight should be seen.

I cite this example because I was reminded of a Facebook conversation I had years ago. Back when I used to talk to conservatives. It was the exact same issue, and the conservative was lying about it. They’re still lying about it. Because they just can’t accept the facts. This is the case across the board with conservatives, almost no matter the subject you are discussing. But nothing riles them up or makes them lie more reliably, than taxes.

The Republican Party in the United States ceased respecting economic facts right around 1981, when Ronald Reagan’s budget director David Stockman used tax cuts on the wealthy to drive the US into structural deficit spending. That structural deficit has been with us ever since, except for a couple of years during the Clinton administration. Total United States federal debt now stands at $24.7 trillion. Since the disastrous Reagan tax cuts, the middle class has been destroyed, wages have stagnated, partisanship has lurched into open civil war, and our nation has fallen apart.

The gambit, of course, has always been to use the specter of this massive debt to justify cuts in social spending. Conservatives keep a debt-clock running for ready reference. And conservatives have never stopped playing that card. It’s a complex Kabuki theater every year, in which so-called fiscal hawks in the Republican party have used the bare-knuckle tactics of debt ceilings, temporary budget resolutions, and government shutdowns to demand cuts to social services.

Yet America’s structural deficit is a problem entirely of fiscal conservatives’ own creation. Tax cuts are spending. And here’s why: Congress has the power to set tax rates wherever it wants. Congress could fully fund any level of government spending, up to the limit of when an onerous tax rate would become such a drag on the economy that it would reduce overall tax collections. You can’t go that high. But what you can do is to jack up the rates on the wealthy to where they used to be during America’s period of greatest prosperity, from 1945 to 1980. During many of those years, US citizens with incomes of over $3 million in 2020 dollars were taxed at 91%. Later the top marginal rates were reduced to 70%. Corporations were taxed at over 50%. We went to the moon, balanced our budget, had a huge trade surplus in products we produced for the world, and built a thriving middle class, during those years.

If Congress therefore gives a tax break to a corporation or an individual below that level, that means it’s collecting less revenue than it otherwise would have. It doesn’t matter which side of the ledger you’re on. For example, if the federal budget is $1 trillion, and you cut taxes by $100 billion, you have to borrow $100 billion. If your budget was $1 trillion, and you increase spending to $1.1 trillion, you also have to borrow $100 billion. In either example, increased spending or tax cuts both directly caused deficit spending. Neither is more responsible for the shortfall than the other.

Back to my Facebook conversation. I made all these points with the fiscal conservative, and he wasn’t having it. He wouldn’t admit that tax cuts were spending. He refused to believe that our structural deficits had been created by Republicans and their tax cuts. Instead of focusing on the economic case I’d laid out, he veered off into all sorts of hateful nonsense about what poor people do with the money the “government wastes” on them. He also talked about fraud, and crony capitalism, and that taxes were “just too high.”

“Raising taxes will kill the economy,” he insisted. (This, in spite of the evidence of how strong the US economy was from 1945 to 1980). He railed that the government shouldn’t have the power to take anyone’s money anyway, and that if we knew what was good for us, we’d “abolish taxes” altogether. Or go for a “flat tax,” which he thought should be “under 10%.” Never mind that he was no economist, had no idea what the government spends money on, or what such low tax rates would do to annual deficits. Nor did he understand the impacts of drastic budget cuts on him and his fellow Americans. He just wanted to keep his money.

You will never get anywhere in these arguments. So stop having them.

All bad governance starts with American voters lying to themselves about the things that matter.

It’s not just economics. You should adhere to the one-strike rule across the board. Because if you’re someone who cares about the well-being of your own family and your fellow Americans, your time is best spent talking to people who are persuadable. You can’t get anywhere with people who have been so brainwashed by right-wing propaganda that they will simply dismiss any evidence you present as “fake news.”

Whether the subject is taxation, economic inequality, immigration, capital punishment, police shootings of people of color, the facts always line up on one side. If you take the time to research those facts, using publicly available data that everyone has access to, and you present that data to a person you’re having a discussion with, they must accept the facts and concede the argument.

Otherwise you’ll know that you’re dealing with a character flaw that is deep, and far beyond your control.

Presidents Shouldn’t Pretend To Be Doctors

We’ve All Fallen For At Least One Conspiracy Theory