Presidents Shouldn’t Pretend To Be Doctors
LOGIN
Sunday, December 4, 2022
Top Posts
What’s Up With the Nazi “Black Sun” Rune Wheel?
Elizabeth Clare Prophet Claimed To Be ‘Clairvoyant’
The Eightfold Path of Denial of Death
Why I Left The Radical Secular Podcast
Miss R*EVOLutionaries: Panel Discussion
Money Is Not A “Shared Fiction”
Beliefs About God Won’t Make You Moral
This Is Not Fine!
Wealth Concentration Leads to Feudalism
Is Something Unclear About What’s Wrong With America?
SUBSCRIBE
Archive

Presidents Shouldn’t Pretend To Be Doctors

Injecting the bleach of dictatorship 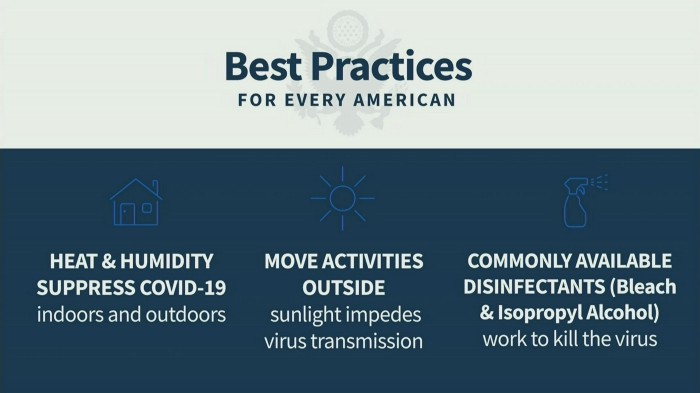 The past 24 hours have delivered something unique in American political history. April 23, 2020 had been a day of wrenching milestones in the Covid-19 pandemic. The US passed the threshold of 50,000 confirmed deaths, as foolhardy governors and local officials in red states sought to prematurely open non-essential businesses, further endangering the lives of their constituents.

Far beyond debate or partisanship, far beyond truth or lies, far even beyond shell-shock: The President of the United States then held forth in the White House press-room by musing, “I see the disinfectant where it knocks it out in a minute. One minute. And is there a way we can do something like that, by injection inside or almost a cleaning?” He was following up on earlier remarks where he discussed “Best Practices for Every American” in front of a PowerPoint slide which listed “commonly available disinfectants” including “bleach” and “isopropyl alcohol.” President Trump also suggested that since “powerful” ultraviolet light can kill the virus on surfaces, “supposing you brought the light inside of the body, which you can do either through the skin or in some other way.”

He quickly hedged that he was just calling for “more research” into those methods, but the damage was done. The petrified faces of the doctors present at the briefing told the story.

It’s difficult to choose between the equally horrifying rationales for his statement:

2) He does know the danger, but doesn’t recognize the gravity of his own words, spoken (even in speculation) on national television.

3) He understands the danger and the gravity of such a statement, but was doing it just to mess with the American people. (Suggested by his later claim that the statement was “sarcasm.”)

The blowback was so swift and severe, that Reckitt Benckiser, manufacturer of Lysol disinfectant, released a strongly worded warning not to take its products internally:

Due to recent speculation and social media activity, RB (the makers of Lysol and Dettol) has been asked whether internal administration of disinfectants may be appropriate for investigation or use as a treatment for coronavirus (SARS-CoV-2). As a global leader in health and hygiene products, we must be clear that under no circumstance should our disinfectant products be administered into the human body (through injection, ingestion or any other route). As with all products, our disinfectant and hygiene products should only be used as intended and in line with usage guidelines. Please read the label and safety information.

Metaphorically, this entire incident both describes and mirrors the Trump presidency to a tee.

Even before the pandemic began, Donald Trump had made over 16,000 false claims since the beginning of his presidency.

People who voted for Trump were voting against truth, expertise, education, the bureaucratic state, free trade, cultural diversity, immigration, cities, technology, progress, and accountability. To sum it up, people who voted for Trump were standing athwart history, voting against the reality of America’s future. Therefore, to his base, his false claims and outright lies were a feature of his presidency, not a bug.

Donald Trump is a known germophobe. So his preoccupation with purity and cleanliness is unsurprising. It becomes ironic in the extreme, when you consider he’s the first American President since Woodrow Wilson to be faced with an out-of-control pandemic crisis. His psychology of purity dovetails neatly with fascism and its preoccupation with authority, order, and the expunging of undesirables.

Bleach destroys undesirable elements such as pathogens in our environment. It whitens clothes and teeth, and sanitizes surfaces. But taken internally in sufficient quantities, bleach will kill you. And this is exactly what the Trump presidency has been doing to our beloved nation. The damage is nearly too great to catalog, although some have tried.

And this isn’t the first stab at quack medical cures coming out of the White House. While Trump’s so-called pandemic team dithered on testing and failed to get vital supplies where they needed to go, the Federal Government was busy acquiring 29 million doses of unproven and dangerous hydroxychloroquine pills. Not only did this debacle help no one, but it disrupted the market for sufferers of lupus, leaving many without medication. But the most damning part of this whole story is that Trump and his family have financial ties to the French firm Sanofi, which manufactures the drug.

A similar conflict of interest is behind the bleach debacle. The Guardian reported that a religious cult leader named Michael Grenon, who is under federal court order not to sell his bleach as a health cure, had been pestering the White House to intervene.

Trump did not specify where the idea of using disinfectant as a possible remedy for Covid-19 came from, and the source for his notion remains obscure. But the Guardian has learned that peddlers of chlorine dioxide — industrial bleach — have been making direct approaches to the White House in recent days.

Grenon styles himself as “archbishop” of Genesis II — a Florida-based outfit that claims to be a church but which in fact is the largest producer and distributor of chlorine dioxide bleach as a “miracle cure” in the US. He brands the chemical as MMS, “miracle mineral solution”, and claims fraudulently that it can cure 99% of all illnesses including cancer, malaria, HIV/Aids as well as autism.

The embarrassing global disgrace of the President of the United States telling citizens to put bleach in their bodies — because a quack suggested it — is the full-flowering of historic dictatorial fascism such as we have never yet seen in the United States of America.

It combines deception, reality-distortion with the psychological notions of purity, authority, sanctity and the persecution of out-groups, with the epic grift involved in the merger of corporation and state.

If we do not eject this narcissistic tyrant from the Presidency, the next step will be the complete collapse of civil liberties. Anyone who thinks that statement is alarmist has not been paying attention to what’s already been lost. The president has not stopped attacking every single institution that could hold him accountable.

So far, he’s neutered the press in the eyes of his followers. He’s neutered Congress with the complicity of Republicans, who rejected his impeachment on a party-line vote. He’s stacked the courts. He’s neutered Federal agencies on everything from the protection of whistleblowers, financial oversight, enforcement of environmental regulations, and even his own FDA. During the pandemic he’s closed our borders and called a halt to immigration, measures Trump’s white-supremacist advisor Stephen Miller just gushed on a call to supporters were part of a “long-term vision.”

While the nation has been distracted by the pandemic chaos, Trump’s minions have been consolidating power at breakneck speed. Our President has done nothing to help or comfort struggling Americans. Nor did he even note the milestone of 50,000 deaths, or offer any words of solace to the families of the dead. Instead he has scowled and paced in his press room, picking fights and playing the victim.

Given that staggering level of malevolence from the White House, is there anyone reading these words who has any doubt that a second Trump term would bring the closure of major media outlets, or the arrest of dissidents?

Against such a grand assault on truth and reality, I’m not sure any combination of words provides any defense, any longer. I’m getting numb.

The Problem With Toxic Positivity

Why Talk To People Who Lie About The Economy?