My First Rush Show: Grace Under Pressure
LOGIN
Thursday, February 2, 2023
Top Posts
Elizabeth Clare Prophet Claimed To Be ‘Clairvoyant’
What’s Up With the Nazi “Black Sun” Rune Wheel?
The Eightfold Path of Denial of Death
Miss R*EVOLutionaries: Panel Discussion
Why I Left The Radical Secular Podcast
Money Is Not A “Shared Fiction”
Beliefs About God Won’t Make You Moral
This Is Not Fine!
The Most Consequential Social Difference Between American Christians And Atheists
Is Something Unclear About What’s Wrong With America?
SUBSCRIBE
Archive

It was a pivotal moment in my life 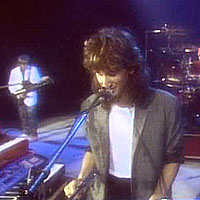 M ay 30, 1984. A spread of piercing green lasers sprayed 400 feet from behind the stage over my head and disappeared into the far wall of the Great Western Forum. The beams split apart from their source behind the massive drum kit on stage and then swept together and merged back into one, to a pounding four-on-the-floor beat. Then the lasers appeared to come from all sides, bouncing off mirrors. They fired into the center of the arena–into a searing mandala pattern. Then the music changed to thundering minor synth chords, and the lasers locked into angular prison bars as Geddy Lee screamed out his startling alliteration of death-camp life.

It was Red Sector A, from the Rush Grace Under Pressure tour, and I was transfixed. Every Sci-Fi book I’d ever read was coming true before my eyes. The sound was overwhelming but not ear-splitting. The Moog Taurus bass pedals rattled my bones and shook the walls. And I was transported to a high-tech dystopian holocaust. But it was somehow beyond exhilarating.

Hearing dramatic life-and-death motifs straight out of Viktor Frankl sung to pulse-pounding rock combined with a futuristic laser show and flashpot explosions was an experience I was wholly unprepared for. At the end of the song, I turned to Mike and shouted “Woooohhhooooooooooooo! We hoisted paper cups of beer over our heads and cheered. It was a catharsis like I’d never had. And it wasn’t just the sound or the lights. I hadn’t heard anything from this album before. The music was so in tune with the times: the height of Cold War fever, the dark side of technology, and the search for meaning.

With world-class literary genius, in Distant Early Warning, Neil Peart blended scientific terms like “heavy water” and “acid rain” with the ennui of middle class American domesticity. I wasn’t hearing any of this from Saint Germain. Only wrath. Could it be that other good people in the world were introspective and concerned about the world’s problems? Could it be that fire and brimstone and decrees weren’t the only way to deal with fear and insecurity? Because I was seeing something incredible up on that stage: Three accomplished musicians who knew how to translate their concern to motivate people. To shake them up and deliver a message of change. And to do it quite seriously while staying in the context of entertainment. Without threatening people’s ‘immortal soul.’ It was powerful.

In the finale of Distant Early Warning, Peart critiques the contrast of America’s aspirations with its excesses of capitalism and military spending, and how we rationalize both our ignorance of the poor, and failing to educate the next generation. And how we avoid facing these uncomfortable truths.

Grace Under Pressure is a dark album. Perhaps the darkest from the middle period of Rush. But it had a direct message for me in a song I later realized is really about the shadow, The Enemy Within. This song couldn’t have had a more powerful resonance if it had been transcribed directly from my subconscious.

I didn’t fully understand any of this that night. I had no idea the mental and emotional straitjacket I was in. But I would learn. Oh, boy, over the next ten years–would I learn. As the concert ended, I thought to myself, if this is what it’s like on the “astral plane,” I want to live there, with the grown-ups who may suffer but deal with their own problems. And who know how to put on a great show and have fun doing it. Not in a humorless ‘heaven’ of childlike innocence, where there was no freedom, and wrath was mistaken for true power.

Mike and I headed out to the car. He enjoyed the show too, but it wasn’t a big deal for him. He grew up normally in LA, and his father Price had been a mentor to both Will and I in our video business. I didn’t have any other non-church friends, and so Mike was good for me.

We used to spend a lot of time at our warehouse in North Hollywood listening to music in the video production truck. The warehouse was soundproof and no one would bother us. I had bought one of Sony’s first consumer CD players and owned just a handful of albums including Rush Moving Pictures. We used to hook the player up to the JBL studio monitors in the truck and crank it. That was an all-new experience in 1984 for anyone who had only heard music on cassette and LP.

So when the opportunity came up to see an actual Rush show, I jumped at the chance to go with Mike. Will had sworn off concerts. He had been a touring drummer for the Robin Trower band in the ‘70s, and he felt guilty about having made money from rock and roll. A few years earlier, I had made the mistake of “confiding” in one of my former teachers, Mr. McNeil about my plans to go to a Styx concert–and having my mother promptly confiscate my tickets. I wasn’t going to risk repeating that little error in judgment by telling Will anything at all about my plans.

Mike hadn’t taken any risk to be at the show, and it wasn’t any kind of life-changing experience for him. But for me it was both. My head was spinning. I would have to drop him off back at the warehouse and drive home, try to make some sense of the experience. I would try to act however 20-year-old church Vice-Presidents were supposed to act, and hope no one suspected where I’d been.

[The above is an excerpt from some autobiographical explorations I’ve been doing. I’m posting it in honor of Rush’s final concert at the Forum on August 1, 2015, which I will be attending.]

Enjoy your Rush concert Sean! You are a true devotee.

It just dawned on me, that a violent descent of energy down the spinal alter is called a rush.

Some day rock music will be dis-placed with something much higher and in harmony with cosmic law. The only law of a cosmos.