Sean Faircloth: Attack of the Theocrats
LOGIN
Sunday, November 27, 2022
Top Posts
What’s Up With the Nazi “Black Sun” Rune Wheel?
The Eightfold Path of Denial of Death
Elizabeth Clare Prophet Claimed To Be ‘Clairvoyant’
Why I Left The Radical Secular Podcast
Miss R*EVOLutionaries: Panel Discussion
Money Is Not A “Shared Fiction”
Beliefs About God Won’t Make You Moral
This Is Not Fine!
Wealth Concentration Leads to Feudalism
Is Something Unclear About What’s Wrong With America?
SUBSCRIBE
Archive

Sean Faircloth: Attack of the Theocrats 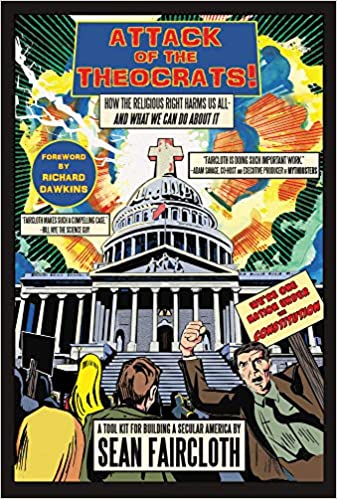 Sean Faircloth is an author, attorney and politician who served five terms in the Maine Legislature. His time in office included appointments on both the Judiciary and Appropriations Committees. At the end of his tenure, Faircloth was elected Majority Whip by his colleagues. During his tenure in office, Faircloth successfully spearheaded over thirty laws, including the so-called Deadbeat Dad child support law which was later incorporated into federal law. In 2009 Faircloth became the executive director of the Secular Coalition for America, where he advocated for separation of church and state and greater acceptance of nontheistic viewpoints in American life. The Democrat has also spoken around the country extensively, addressing topics such as the U.S. Constitution, children’s policy, obesity policy, and sex crime law. In September 2011 he became the Director of Strategy and Policy for the Richard Dawkins Foundation for Reason and Science and was the opening speaker for Dawkins’ book tour.

Faircloth published his work Attack of the Theocrats! How the Religious Right Harms Us All — and What We Can Do About It in February 2012. The book contains a foreword written by Richard Dawkins and explores the many ways that state and federal legal codes privilege religion, ultimately demonstrating that religious bias harms all Americans. Faircloth is currently blogging for the Richard Dawkins Foundation website and delivering public speeches on secularism and “the dangers of theocratic laws, and the value of scientific policy.”

Frank Cipolla: It Shocked Even Us!