Dr. Peter Boghossian: Faith Is A Cognitive Sickness
LOGIN
Monday, December 5, 2022
Top Posts
What’s Up With the Nazi “Black Sun” Rune Wheel?
Elizabeth Clare Prophet Claimed To Be ‘Clairvoyant’
The Eightfold Path of Denial of Death
Why I Left The Radical Secular Podcast
Miss R*EVOLutionaries: Panel Discussion
Money Is Not A “Shared Fiction”
Beliefs About God Won’t Make You Moral
This Is Not Fine!
Wealth Concentration Leads to Feudalism
Is Something Unclear About What’s Wrong With America?
SUBSCRIBE
Archive 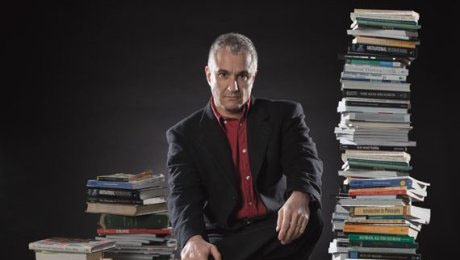 Dr. Peter Boghossian’s main focus is bringing the tools of professional philosophers to people in a wide variety of contexts. Peter has a teaching pedigree spanning more than 20 years and 30 thousand students–in prisons, hospitals, public and private schools, seminaries, colleges and universities, Fortune 100 companies and small businesses. His fundamental objective is to teach people how to think through what often seem to be intractable problems.

Peter’s primary research areas are critical thinking and moral reasoning.  His doctoral research studies, funded by the State of Oregon and supported by the Oregon Department of Corrections, consisted of using the Socratic method to help prison inmates to increase their critical thinking and moral reasoning abilities and to increase their desistance to criminal behavior.

His work has been noted on The Huffington Post, The Richard Dawkins Foundation for Science and Reason, and other media outlets; he was an invited guest on the Lars Larson Show, interviewed for the cover story of the Mercury, and advocated via social media by the Executive Director of the Skeptic Society, Michael Shermer, and bestselling author and head of Project Reason, Sam Harris.

Hemant Mehta: I Sold My Soul on eBay