Rocky Anderson: The Justice Party
LOGIN
Sunday, November 27, 2022
Top Posts
What’s Up With the Nazi “Black Sun” Rune Wheel?
The Eightfold Path of Denial of Death
Elizabeth Clare Prophet Claimed To Be ‘Clairvoyant’
Why I Left The Radical Secular Podcast
Miss R*EVOLutionaries: Panel Discussion
Money Is Not A “Shared Fiction”
Beliefs About God Won’t Make You Moral
This Is Not Fine!
Wealth Concentration Leads to Feudalism
Is Something Unclear About What’s Wrong With America?
SUBSCRIBE
Archive 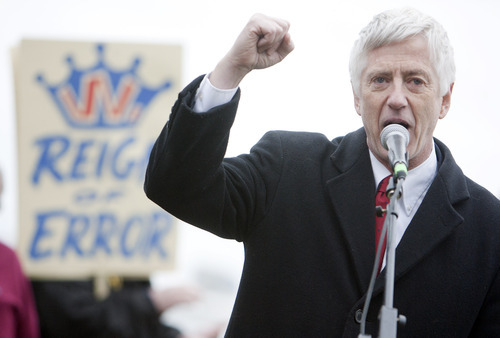 Rocky Anderson, former Mayor of Salt Lake City (2000-2008), is founder and former Executive Director of High Road for Human Rights. He is running for President of the United States as a candidate for The Justice Party.

Ross C. “Rocky” Anderson (born September 9, 1951) served two terms as the 33rd mayor of Salt Lake City, Utah, between 2000 and 2008. He is the Executive Director of High Road for Human Rights. Prior to serving as Mayor, he practiced law for 21 years in Salt Lake City, during which time he was listed in Best Lawyers in America, was rated A-V (highest rating) by Martindale-Hubbell, served as Chair of the Utah State Bar Litigation Section and was Editor-in-Chief of, and a contributor to, Voir Dire legal journal.

As Mayor, Anderson rose to nationwide prominence as a champion of several national and international causes, including climate protection, immigration reform, restorative criminal justice, LGBT rights, and an end to the “war on drugs”. Before and after the invasion by the U.S. of Iraq in 2003, Anderson was a leading opponent of the invasion and occupation of Iraq and related human rights abuses. Anderson was the only mayor of a major U.S. city who advocated for the impeachment of President George W. Bush, which he did in many venues throughout the United States.

Anderson’s work and advocacy led to local, national, and international recognition in numerous spheres, including being named by Business Week as one of the top twenty activists in the world on climate change, serving on the Newsweek Global Environmental Leadership Advisory Board, and being recognised by the Human Rights Campaign as one of the top ten straight advocates in the United States for LGBT equality.