Cheap Gas For The Expedition
LOGIN
Monday, December 5, 2022
Top Posts
What’s Up With the Nazi “Black Sun” Rune Wheel?
Elizabeth Clare Prophet Claimed To Be ‘Clairvoyant’
The Eightfold Path of Denial of Death
Why I Left The Radical Secular Podcast
Miss R*EVOLutionaries: Panel Discussion
Money Is Not A “Shared Fiction”
Beliefs About God Won’t Make You Moral
This Is Not Fine!
Wealth Concentration Leads to Feudalism
Is Something Unclear About What’s Wrong With America?
SUBSCRIBE
Archive

Cheap Gas For The Expedition 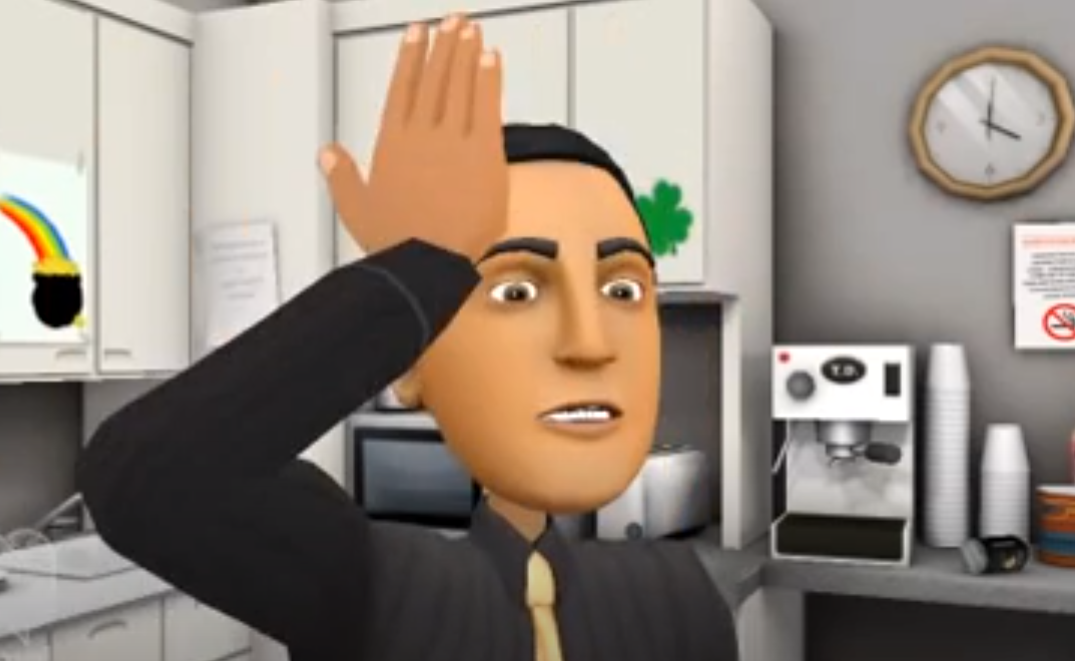 I got a bit creative and made a cartoon dialog about high gas prices.

Shelly is a geologist and passionate sustainability expert, who also happens to work as sales manager at the Widget Factory. Victor is the production manager, a composite character who embodies the “typical American consumer,” as well as a few classic lines from Donald Trump, George H.W. Bush, and teabaggers/climate skeptics. Victor is based on reality: I’ve personally heard every one of his positions in conversations about the climate and gas prices. Enjoy!

[Monday Morning, week after St. Patrick’s day, the decorations are still up in the company break room.]

S: Hi Victor, how was your weekend? You sure look cheerful for a Monday…

V: Great, Shelly! This four dollar a gallon gas has been killing me. I just found gas for $3.20 a gallon. What a relief!

S: Wow, $3.20 a gallon–the good old days, right? When I first started driving, you could practically fill up for ten bucks. You know those days will never come again. I’ve heard in the long run, energy prices are going nowhere but up.

V: Yeah, I know. But I’d rather save money now and worry about that later. Three kids, my mortgage, all the bills, I just can not handle paying a hundred bucks for a fill up. It’s not right. This is America.

S: A hundred bucks? I had no idea.

V: Yeah, now it’s down to about eighty. Still expensive, but I just can not stomach handing over a c-note every week at the gas station. It makes me sick. It’s like a tax. It’s going to kill the economy. We don’t eat out that much any more, and forget about any road trips, or taking out the boat this year. We’re staying home.

S: That sucks. I really had no idea it was that bad.

V: How could you not? You have three kids too, you must have been paying through the nose like everyone else?

S: Oh, no. On my salary? I would have gone totally broke. I have a hybrid, we bought it in 2007. In fact, we’re hitting the road and going camping in Yosemite in a couple of weeks. Even at four dollars a gallon, it only costs about 40 bucks to fill the tank. And we can fit all our gear in the back. We love it!

V: Damn it. We have an Expedition, just bought it last year. It seemed so great and so roomy–perfect for the family. It has DVD players in the back, the kids love it. But now I don’t know what I’m going to do. Nobody wants them. You can not sell them. Nobody wants to spend a hundred bucks a week on gas. And now I owe more than it’s worth.

S: I feel bad for you. You know I’m not just a sales manager. I studied geology, and so I’ve known about the world oil situation since college. It’s scary.

V: What do you mean?

S: Well, the United States passed the peak of oil production in 1971, so it will never again be able to produce as much oil. That’s why we have to buy it from the Middle East.

V: Well they have plenty of oil to sell, we just need to kick their asses.

V: Yeah, why is that? We spent all that money, we liberated them, they should just give us the oil!

S: A lot of geologists think Saudi Arabia is running out, too. And that the world passed its peak of oil production in 2005. That means even with all the new cars being built in China and India, the whole world is going to have to learn to get by with less oil.

V: Well, dammit, why don’t we just drill more right here in the United States?? What’s stopping them? It must be those damned environmental regulations.

S: No, actually, all the easy oil has been drilled in America. That’s what it means to say the US has passed its peak of production. Newer oil fields are smaller, harder to find, and are in more difficult locations than before. That’s why oil companies have to drill five miles under the sea floor. That’s why rigs sit in a mile of water out in the middle of the Gulf of Mexico.

V: Yeah, but I’ve heard President Obama is holding up drilling permits. There’s just too much regulation. People are suffering.

S: Actually, the regulations are really lax. That’s why BP had that huge oil spill.

S: Some areas along the coasts are off limits. But drilling there has high environmental risks, the potential to ruin beaches and kill tourism. The Arctic National Wildlife Refuge is a unique and special ecosystem. We could drill in all of those sensitive places, and it would only delay the price increase a few years.

V: Well, this is bullshit. They should drill here and drill now. We should not be paying these kind of prices. At least we could keep American oil cheap for Americans.

S: It wouldn’t work. Oil is a global product, and so prices are set globally. America imports two thirds of its oil, and for every single shipment, we are bidding against consumers in China, India, Japan and Europe. Even for the oil we’re still pumping right here at home.

S: That’s just the way it is. Ninety percent of the world’s oil is pumped by government-owned national oil companies. Even they don’t set the price. It’s set by the world market.

S: No, actually, it’s the free market–supply and demand.

V: That’s not how the market’s supposed to work. The American way of life is non-negotiable.

S: So, if we want to keep driving big cars, we are going to have to pay for it. And pay, and pay even more. Just be glad you’re not a poor farmer somewhere trying to buy diesel fuel for your tractor.

V: But dammit, Saudi Arabia’s supposed to be the world’s gas station. How can they be running out?

S: Actually, the United States imports more oil from Canada than Saudi Arabia. And Canada is the only country which is expected to dramatically increase its oil production over the next 10 to 15 years.

V: Oh Yeah, I saw on the news they were building a pipeline. Keystone XL or something. That will bring down oil prices, right? I hope they hurry.

S: Well, right now, President Obama and Hillary Clinton are totally in favor of that pipeline, pushing to get it done as soon as possible. I’m really upset about it.

V: Upset?? Are you crazy? That’s the one thing that’s going to save the economy. And my vacation next year. We need that pipeline, and we need it now!!

S: Not so fast. The oil from that pipeline comes from tar sands, which is a bituminous solid like asphalt. The tar has to be heated up with natural gas and cooked out of the sand. Then the sand has to be washed with water. They’ve diverted the entire Athabasca river. Fort McMurry looks like a war zone. There are hundreds of square miles that look like open-pit strip mines. And they are just getting started.

V: What choice do we have? We need the gas.

S: It’s not really a choice. Oil from tar sands produces twice as much greenhouse gas as normal oil. Which means we are cooking the planet even faster than we would otherwise.

V: Oh, that whole global warming thing? You’ve been paying too much attention to that lying fraud Al Gore. He has a big house, and he’s a huge hypocrite. He flies all over the world spewing out all kinds of hot air.

S: No actually, Al Gore’s travel has nothing to do with it. He’s just trying to warn us. He could be relaxing on a beach somewhere if he wanted to, right?

V: I guess so. But he’s just trying to make all that money selling carbon credits. What a crook.

S: No matter what you think of Al Gore, the world is really getting warmer, and it’s speeding up. This last decade has been the warmest in [recorded] history. Last year, the Arctic was up to 25 degrees warmer than normal. That’s why we had Snowmageddon, and that’s why we’re having so many powerful tornadoes, wild weather, and flooding as all that snow melts. And Texas and Arizona are having record droughts, and record fires. It’s no coincidence.

S: It’s not rocket science, we’ve known about climate change since the 1950s. Every scientist from Carl Sagan to Isaac Asimov talked about it in the last decades of the twentieth century. Today, every national scientific body has concluded that the climate is changing, and the burning of fossil fuels is responsible.

S: Do you believe your choice of family car is draining your wallet?

V: Well, yeah, but if I believe in global warming, they’ll want to raise the price of gas even more.

S: That might be true, but disbelieving in climate change won’t make it stop. And the effects of climate change will kill the economy even worse than high oil prices ever could. Imagine if droughts and floods got so bad the farmers couldn’t grow food, and we couldn’t feed our families. Imagine if the ocean got so acidic from carbon pollution, it killed the coral and caused a mass extinction. That’s what the scientists are saying is very likely to happen.

V: Yeah, I guess if the world’s ecosystem crashed, none of us would be too worried about going on vacation. But still, I’m not so sure about this whole thing. I think it is a big conspiracy to get money for the United Nations, and take away American independence.

V: I don’t like people telling Americans what to do. They have no right.

V: Yeah, but how do we even know for sure it’s happening?

S: Just look at the NASA temperature data. If they could send people to the moon, I think we should probably trust them to take Earth’s temperature.

V: I see your point.

S: We need to do a lot more than just drive smaller cars. We need to change our entire relationship to energy. It’s the biggest crisis humanity has ever faced. And the biggest opportunity.

V: I feel sick to my stomach.

S: I understand. It’s a lot to think about. But please remember it’s not good news for the world when oil prices drop. It may feel good for the moment. But it prolongs our dependence. It makes our transition away from carbon more difficult, and it ruins the business case for companies trying to develop sustainable and carbon neutral liquid fuels that could drive prices down for good.

S: Yup, long-term. Just like our ten-year sales forecast. See you at the meeting.

Can We Drill Our Way To Lower Gasoline Prices?

Police-State Tactics To Punish The Poor