Aggressive Ridicule Of Religion Is Working
LOGIN
Sunday, December 4, 2022
Top Posts
What’s Up With the Nazi “Black Sun” Rune Wheel?
Elizabeth Clare Prophet Claimed To Be ‘Clairvoyant’
The Eightfold Path of Denial of Death
Why I Left The Radical Secular Podcast
Miss R*EVOLutionaries: Panel Discussion
Money Is Not A “Shared Fiction”
Beliefs About God Won’t Make You Moral
This Is Not Fine!
Wealth Concentration Leads to Feudalism
Is Something Unclear About What’s Wrong With America?
SUBSCRIBE
Archive 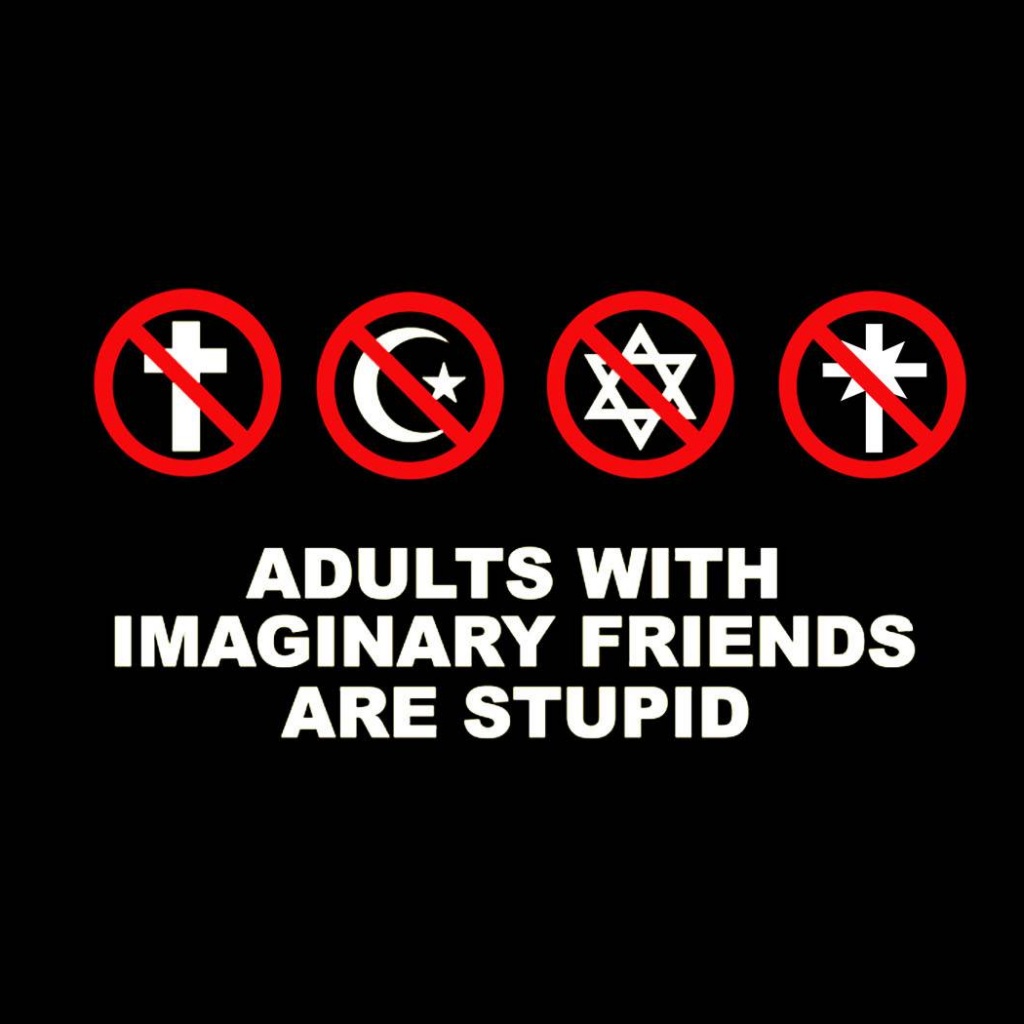 The New York Times (!) just ran an article called More Atheists Shout It From The Rooftops.The Los Angeles Times (!) ran one called Are Atheists The Hot New Political Force? Barack Obama stated in his inaugural address that we are a nation–among other things–of nonbelievers (!).

It doesn’t get any better than this.

From the NYT article:

Polls show that the ranks of atheists are growing. The American Religious Identification Survey, a major study released last month, found that those who claimed “no religion” were the only demographic group that grew in all 50 states in the last 18 years.

Nationally, the “nones” in the population nearly doubled, to 15 percent in 2008 from 8 percent in 1990. In South Carolina, they more than tripled, to 10 percent from 3 percent. Not all the “nones” are necessarily committed atheists or agnostics, but they make up a pool of potential supporters.

Local and national atheist organizations have flourished in recent years, fed by outrage over the Bush administration’s embrace of the religious right. A spate of best-selling books on atheism also popularized the notion that nonbelief is not just an argument but a cause, like environmentalism or muscular dystrophy.

Ten national organizations that variously identify themselves as atheists, humanists, freethinkers and others who go without God have recently united to form the Secular Coalition for America, of which Mr. Silverman is president. These groups, once rivals, are now pooling resources to lobby in Washington for separation of church and state.

A wave of donations, some in the millions of dollars, has enabled the hiring of more paid professional organizers, said Fred Edwords, a longtime atheist leader who just started his own umbrella group, the United Coalition of Reason, which plans to spawn 20 local groups around the country in the next year.

From the LAT article:

Now, after President Obama reached out to them with a first-ever mention during his inaugural address (“We are a nation of Christians and Muslims, Jews and Hindus and nonbelievers,” Obama said), atheists think the time is right for a return to humanistic principles over religious influences in public policy.

“The climate is right in the country today for a major expansion of humanist ideals and humanist thinking — atheism, free thought,” Louis J. Appignani, the Florida tycoon who has earmarked $30 million for various atheist causes, told the National Journal. “I think we are on the threshold of a counter-revolution from the Bush years.”

Today the New York Times profiled the Secular Humanists of the Lowcountry in Charleston, S.C., the beautiful community of southern gentility where the Civil War began. This time, said the group’s founder, the mission is not to declare war but to declare themselves.

“It’s not about carrying banners or protesting,” said Herb Silverman, a math professor at the College of Charleston who said the group has about 150 members on the coast of the Carolinas. “The most important thing is coming out of the closet.”

As someone who’s been writing about atheism for nearly eight years, here are some of the shallow criticisms and straw-man attacks I’ve heard:

“You’re too harsh, you’re intolerant, you’re going to turn people off.” Or, “you need to engage religion on its own terms, and learn more about why people believe. Or, “If you’re going to discuss religion, learn to make cogent theological arguments–you don’t want to sound like a fool.” Or “No one believes in the absurd God atheists describe.” Or “you’re never going to get people to stop believing in religion, so why even try?”

These objectors are people who pretend to be rational and open-minded. To prove it, many of them sport a “Coexist” bumper sticker on their car, which (while pretending to be impartial) promotes religion over non-religion (as Dennett describes, “belief in belief.”) Some versions of the sticker even include E=mc2, showing that the religious sympathizer is trying to lump ‘atheistic science’ in as ‘just another religion.’

These are objections the entire movement has been dealing with ad nauseam. And they’re clearly bunk. This bellyaching has always demonstrated to me more than anything else where a person’s true sympathies lie–with the believers. It’s also self-refuting. Consider these two scenarios:

Scenario 1: Atheists use in-your-face tactics, turn people off, and remain a hated and mistrusted group. That would seem to play right into the hands of theists and their sympathizers (the ‘spiritual, not religious’ types), keeping religion and spirituality ‘respected’ as the dominant sociocultural force, and atheism marginalized.

Why the objection, then? Is it because they’re actually afraid of Scenario 2?

Scenario 2: Atheists use in-your-face tactics, and as a result, a groundswell occurs of people who have previously been too timid to come forward. Atheism receives national recognition and is no longer hated and feared, but begins to be respected as a large and growing political force.

It is clear from this triple-play of atheist profile-raising (NYT, LAT, and Inaugural address) that Scenario 2 has already happened or is well underway. Fund raising for secular political action is entering the same orders of magnitude as the top religious lobbying groups. The scare tactics and attempts at intimidation by accommodationists have not only failed, but failed spectacularly.

As the Secular Coalition noted, “This is exactly the kind of visibility and respect we hoped to give you when we started our Coalition in 2002.“

So a hearty thanks to all my fellow atheist writers, as well as those who have donated funds or come out to their families and friends. Keep up the good work. You are making all the difference in the world.

Hey BlackSun, great post – I'm interested to know more about fundraising for secular political action. Are you saying we're getting to a point where we're competitive with religious lobbies? If so, I'd love to hear more about that. As far as I knew, the Secular Coalition for America just has the one lobbyist so far.

What caught my eye was this section:

Ten national organizations that variously identify themselves as atheists, humanists, freethinkers and others who go without God have recently united to form the Secular Coalition for America, of which Mr. Silverman is president. These groups, once rivals, are now pooling resources to lobby in Washington for separation of church and state.

A wave of donations, some in the millions of dollars, has enabled the hiring of more paid professional organizers, said Fred Edwords, a longtime atheist leader who just started his own umbrella group, the United Coalition of Reason, which plans to spawn 20 local groups around the country in the next year.

Also, one donor is said to have given $30 million. From my fund-raising days, I remember that any successful fund drive requires a small number of large donors, as well as the larger number of small donors. When you start seeing those kinds of numbers, it means secular lobbying is "entering the same orders of magnitude as the top religious lobbying groups." But we are no means there yet.

Thanks for stopping by :-)

I have always thought that both methods of activism in your face and subtle, have a place. I employ both depending on the context. Some times you gotta call a spade a spade, others you need to exercise tact. Kudos to you and all active atheists

Oh, goody! Does this mean I can come out out of the closet, too, and say I hate dogs? After all, dog is god spelled
backwards. Unfortunately, bitches and sons of bitches are not at all imaginary when they are those barking,
yapping-in-the-night thieves of a good night's rest.
Once when I lived in New York City I used to wish it would rain often to wash the dog produce down the gutters.
Nowadays there are scooper laws, which makes me wonder who is the king and who is the worshipful subject?
The religion of dog owners is somewhere up on a level of Mom and apple pie– rather than tolerate debate it's
"love me, love my dog." O Freud, where art thou when we need you?

You know, while I was reading the previous article about dark greens, I was wondering if their spectacular failure to promote environmental causes could not be compared to the efforts made by "in your face" atheists. Fortunately, while I was half way through this post I realized the difference between the two approaches, a difference so obvious and so stark that I am at a loss to epxlain how I ever missed it: in your face atheists are not extremists.

It may seem so because religious extremists are so common, while people at the theoretical (if not actual) extreme of atheism don't seem to exist; since there does nto seem to be anyone further along than us, people assume that we must ourselves be standing on the extreme side, when we are doing nothing of the kind.

Indeed, I daresay that when society in general realizes this simple fact our particular struggle will be over.

I am delighted and hopeful after reading this wonderful article.

Me too. I'm listening to John Lennon's "Imagine" and I am smiling like a fool.

We may be making progress in America, but the rest of the world is nuts with religion.

I currently live in Africa (Kenya, to be specific). Most of the older and less-exposed young people in my area believe in witchcraft. There are those that don't, but they are die-hard Christians. I always tell them that believing Jesus walked on water, turned water to wine (not to mention moses parting the Red sea) is not a far cry from believing in spells, curses, and rain dances… Same shit, different guy. Sometimes I try to explain Russel's teapot to them (how, if it was taught for 2,000 years as truth, we'd believe it), but they allllways disagree.

Can we add the Cult of Gaia to the list?

We need to take care of the earth for the benefit of humans, not some imaginary spirit.

Seekers of truth can find it in the contiguous dimensional worlds, humorously described by Edwin Abbott in 'Flatland'. Science determines truth by checking phenomena against the over-all theory. If that theory explains the phenomena then we can firmly hold it. 'Techie Worlds' (available at amazon.com) examines Trinity, resurrection, judgment, soul, and finds Christian teaching logical and rational in Abbott's context.
Unlike Christians, materialists believe that only this world exists. Science can only experiment with this material world, whereas mankind is quite unable to manipulate the higher worlds.. Yet humans report on miracles, on events such as the dance of the sun at Fatima. Pagans believe in many gods (with good reason) and the possessed levitate, all evidence that spirit worlds do exist. Both positions resolve to 'acts of faith', but the Christian (in the Flatland context) is simple, consistent, and teaches love for human improvement. Open your minds with 'Techie Worlds' logical explanations.
GeorgeRic