Who’s Afraid Of The Atheist Bus Sides?
LOGIN
Sunday, November 27, 2022
Top Posts
What’s Up With the Nazi “Black Sun” Rune Wheel?
The Eightfold Path of Denial of Death
Elizabeth Clare Prophet Claimed To Be ‘Clairvoyant’
Why I Left The Radical Secular Podcast
Miss R*EVOLutionaries: Panel Discussion
Money Is Not A “Shared Fiction”
Beliefs About God Won’t Make You Moral
This Is Not Fine!
Wealth Concentration Leads to Feudalism
Is Something Unclear About What’s Wrong With America?
SUBSCRIBE
Archive

The very suggestion was like poking a hornet's nest 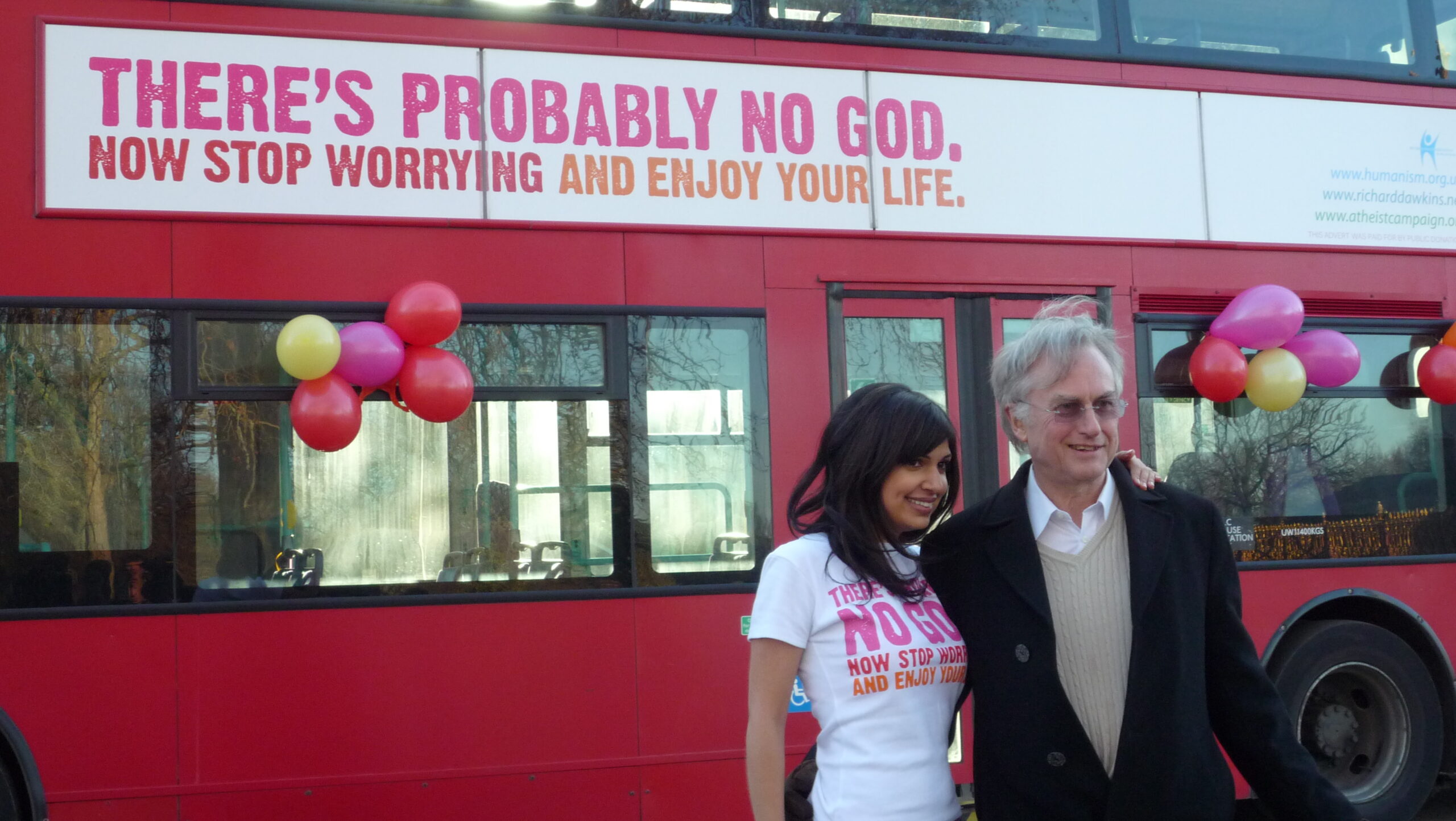 Religion has never needed much prodding to demonstrate its hypocrisy.It’s almost a weekly perp-walk of the clergy across the world stage with their sexual indiscretions. Then there’s the lying scoundrels from the Discovery Institute, hack film makers or busybodies on school boards who pretend to morality but think nothing of trying to sneak their biblical creation myths into the classroom as some form of beleaguered ‘science.’

And don’t forget about the linguistically-challenged clan who nearly became America’s second family, running on a ‘faith-and-values’ ticket even as their debutante daughter sported an unwed pregnancy. It’s even trite to bring up these examples, because you can’t open a web browser these days without stumbling over yet another instance of humanity shamefully putting its foot in its collective mouth in the name of God. The latest non-shocker was an Islamic woman who arranged the rapes of 80 women in Iraq, then persuaded the victims the only way to redemption was to become suicide ‘martyrs.’

This Machiavellian double standard of piousness coupled with despicable behavior has ruled the day for most of human history. Ubiquitous religious symbols, logos, steeples and minarets–not to mention fear and dogma–permeate every city and town on the planet, and fail to even dent man’s inhumanity to man. Cars are festooned with IXOYE fish, crucifixes, rosary beads, “Jesus Saves” bumper stickers, and even an occasional “Fear God.” You can’t get away from ads, church signs and billboards on practically every corner of the civilized (and uncivilized) world.

So when some mild-mannered atheists got together (a minor miracle in and of itself) and donated funds to place a cheeky ad on a few hundred buses in London, the religious shouldn’t have been concerned, right? I mean, they dominate the landscape. Some 84% of the world’s population believes. The atheists can’t claim even the pretense of equal exposure. Just a token message, which has been duplicated or paraphrased in about a dozen cities in a very short-term campaign.

The smartest thing religious people could have done was to keep their traps shut. Every word spoken against the campaign, every transit agency that refused to run it, every counter-ad placed by Christians simply underscores two points: religion doesn’t know how to share the stage and whenever religious preference collides with freedom of speech, religion usually wins. It demands to be the only point of view, and freaks out when anyone dares question its authority. This is a fatal weakness. It’s ironic, since just about the only thing religions can all agree on is that there is some kind of higher power backing them. But they can’t agree on anything else: what God says, what s/he looks like, who’s an authentic prophet, whether it’s one God, many, or one and three at the same time.

The only number of gods they just can’t seem to handle is zero.

Note the tentative wording of the ad: “There’s Probably No God…” Professor Dawkins had preferred the more scientifically correct wording “There’s Almost Certainly No God…,” but was overruled by the British Adversing Standards Agency. I think it’s good they said “probably.” Because even though I agree with Dawkins that there is almost certainly no God, I think “probably” presents a more rhetorically defensible position. It makes atheists seem more open to compromise. I don’t think fence-sitting is a better philosophical stance. But the world of perception is a whole other matter, more akin to international diplomacy–especially when people’s belief systems get involved. “Probably” is a nice middle ground, and a good debut advertising position for non-believers.

At last count, transit systems in Halifax, Nova Scotia; Genoa, Italy; Vancouver, Canada; and Hobart, Tasmania have refused or insisted on rewordings of the ads.

I’m beyond being disgusted by this. Double standards are simply endemic to everything that is touched by religion. No other form of public speech would be subject to such unabashed censorship. And place the shoe on the other foot: How would believers feel if their ads claiming that “God is watching you” or “God loves you,” or “God espouses this-and-such political position” were subject to rewording?

A strong argument could be made that this particular billboard, which is all over the American South, is blatantly offensive to human decency, since it’s nothing short of a thinly-veiled threat of eternal torture and damnation. (No wonder these folks like Guantanamo). But because it represents the majority viewpoint, it gets a pass. And people accuse atheists of being negative!

But the clincher is what the religions themselves are doing to counter the bus sides. They’ve got at least three campaigns in the works. First, an ad with a biblical insult to atheists from Psalms: “The fool hath said in his heart there is no God.” Second, a series of copycat ads with such slogans as “There definitely is a God; so join the Christian Party and enjoy your life.”

Now from a marketing standpoint, if you fight on the opponent’s turf, you lose. You have to counter their campaign with a smarter campaign. It’s one-upsmanship. Using a negation of the same slogan is lame in the same way that saying “I know you are, but what am I?” is lame. Good if you’re in second grade, but useless after that.

It seems religion is in the second grade. Atheists made a fully supportable assertion: “There’s probably no God.” They know you can’t prove a negative. But the Christians are still caught up in their arguments from authority and scripture, as if a quote from Psalms could settle absolutely anything. Or, that by simply declaring something to be true, it makes it so. So hard for them to change old habits–the pulpit is a holdover from the monarchy–and is just not well adapted to the modern social conversation.

If these ads run unchanged, the irony will be complete. Atheists were prevented from claiming there was “almost certainly” no God, while Christians were allowed to use the word “definitely.”

But it’s OK. The public is watching the controversy. In marketing you learn that the success or failure of dueling campaigns is determined not by the advertisers, but by the audience. Time to hit those focus groups. Some people may be influenced by smart marketing, but they also know a rat when they smell one.

Clear win for the atheists. And it’s just the first round. Anyone want to bet how long it will be before Pascal’s wager shows up on a billboard?

If the theologians want to pay good money to wheeze out their 17th-century blackmail apologetics in front of a 21st-century audience, let the drubbing begin.

So, How Thirsty Do You Have To Be?

Sanctuary in the Skies

I used the term hypocrisy on my blog post about this. Some christians complained to the ASA
that we said 'there's probably no god"; but then they are happy to definitely state
"there is a god".; and probably expect us not to complain.

Always that double standard, right you are.

what is it that does keep everything up and well. that keeps us alive even to make choices of our own. that still keeps everything from being destroyed no matter how we wish or think it should. what is it that starts us keep us for our time and ends us without our consent. that must be something supernatural, perfect, omnipotent omnecient is all our feebe minds can possess. only a God can,

"At last count, transit systems in Halifax, Nova Scotia; Genoa, Italy; Vancouver, Canada; and Hobart, Tasmania have refused or insisted on rewordings of the ads."
The real shocker was finding out that Nova Scotia seceded from Canada!

"And it’s just the first round. Anyone want to bet how long it will be before Pascal’s wager shows up on a billboard?"
Isn't the pictured billboard essentially that?

Want to volunteer for a copy-editing position? :-)

As for Pascal's Wager, I was referring to an actual formal statement. The basic gist of it underlies all guilt, sin, worship, and notions of an angry God.

"Want to volunteer for a copy-editing position? :-) "
No way! I've already got a job. Unemployment is way more fun (aside from the lack of pay).

"As for Pascal's Wager, I was referring to an actual formal statement. The basic gist of it underlies all guilt, sin, worship, and notions of an angry God."
You're too formal. Relax. If what I've heard is correct, we'll have eternity to think about it. On the plus side, since Pascal works for any God or gods, and many of those have some form of badness, eternal or otherwise, chances are pretty good that the wagerists will be with us.

Good post. I never dreamed that the British ad would spawn so many spin-offs. I agree, the atheists have won this round. We struck first and put the Christians in a defensive position. They haven't played defense for a very long time, and their rust shows badly, whereas we atheists are rather used to doing so. Being on the offensive was a nice change for us, I think.

That billboard is awful. "Life is short. Eternity isn't"… I can almost hear the inquisitors adding "and there's no one to hear you scream – muhahahahahaha."

Do you want to defend yourself against the evil, marauding forces of Christianity?
I just finished reading a book that talks about this stuff. So I'll give it a plug.
It's called “Defending My God-given Right to NOT be a Christian” by Jimmy D. Kuratz. It proves that Christian theology is an invalid moral compass and that the Bible is a fraud! It gives us atheists a ton of ammunition for fending off the Christians. I bought the book off his website: http://www.religiousbaggage.com
Tom

So is the whole book as poorly argued as the Satan excerpt?

Sorry to be snide, but random advertisements like that bother me.

But seriously, did the author address the much more commonly known supports for Satan/the Devil in Matthew, Job, Revelation, and Genesis?