The Bitter Legacy Of A Failed Apocalypse
LOGIN
Monday, December 5, 2022
Top Posts
What’s Up With the Nazi “Black Sun” Rune Wheel?
Elizabeth Clare Prophet Claimed To Be ‘Clairvoyant’
The Eightfold Path of Denial of Death
Why I Left The Radical Secular Podcast
Miss R*EVOLutionaries: Panel Discussion
Money Is Not A “Shared Fiction”
Beliefs About God Won’t Make You Moral
This Is Not Fine!
Wealth Concentration Leads to Feudalism
Is Something Unclear About What’s Wrong With America?
SUBSCRIBE
Archive

The Bitter Legacy Of A Failed Apocalypse

Lesson learned: No one can predict the future 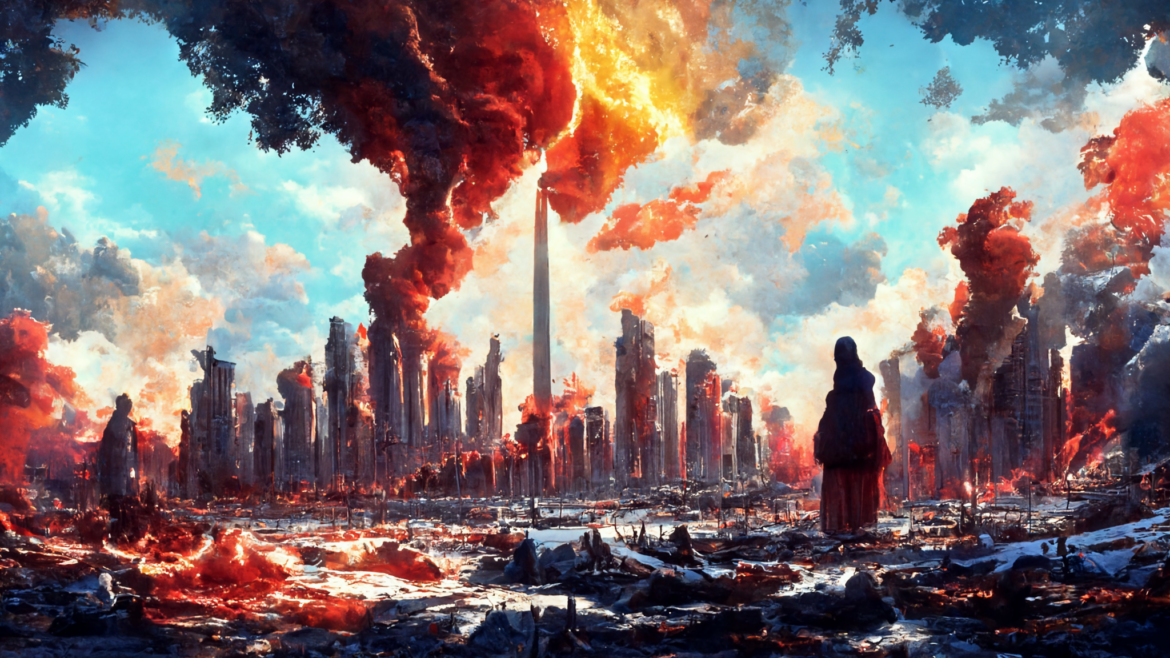 Following is a story that ran in the Bozeman Daily Chronicle print edition last Sunday, but did not make it online.Jessica pretty much nailed it, and quoted all of us accurately. She was good enough to send me a copy:

Guru Ma’s daughter shares her story about living inside CUT

At the peak of the Church Universal and Triumphant’s popularity in the late 1980s, its leader, Elizabeth Clare Prophet, prophesied earthquake and nuclear war, sending thousands of church members into a flurry of activity. Fearing apocalypse, they built the largest private bomb shelter in the United States near Livingston.

Followers believed – some still do – that Prophet had extraordinary abilities, including healing and precognition. Central to church ideology was a belief that Guru Ma, as they called her, acted as the sole earthly conduit for Jesus, Buddha and other religious masters.

Nearly 20 years after the apocalyptic forecasts proved wrong, Prophet’s daughter, Erin Prophet, has released a book about growing up in that environment, learning how to walk in her guru mother’s footsteps and then forging her own.

The story reads like fiction. But it’s not. And the Prophet children, who have had years to digest their unusual upbringing, say the church’s story should be a cautionary tale.

“I think that a lot of the problem” with followers’ loyal submission to Prophet’s doomsday forecast “came from picking up an authoritarian belief system,” Erin Prophet said in an interview with the Chronicle.

As the church grew, Elizabeth Clare accumulated power. Followers placed unquestioning faith in her. Praying when she told them to, they married and named their children at her bidding.

“I don’t think she ever would have admitted that some of her actions were motivated by power,” Erin Prophet said of her mom. “It was always for the good.”

Elizabeth met her future husband, Mark Prophet, and joined his Summit Lighthouse Church in 1961. It was there she trained to be a messenger. After Mark Prophet’s death in 1973, Elizabeth renamed the ministry the Church Universal and Triumphant and expanded it into a New Age sect with followers worldwide.

Mark Prophet dubbed her “Mother.” And Elizabeth was a natural. A charismatic leader, her word became gospel for thousands.

Yet Erin wrote that her mother lived in a “fantasy of cosmic drama.” Much of her message focused on spiritual warfare, a clash of good, as manifested by CUT ideology, and evil, often taking the form of church critics.

The church was founded on nonviolent principles. But as Elizabeth became increasingly isolated, and after losing an expensive civil lawsuit, God’s proxy felt besieged.

“She took it really hard,” her son, Sean Prophet, now 44, said. “That put her at odds with the whole world.”

As her popularity grew, church headquarters were moved from Southern California to Corwin Springs and Prophet’s dire predictions escalated.

“All of a sudden she starts showing these movies about how we are going to have an Armageddon,” said the fourth of Elizabeth Clare’s five children, Tatiana Prophet, now 36.

The church became increasingly insular as members prepared for a Revelations-type scenario, in which CUT followers, as God’s chosen people, would, with careful planning, make it through the apocalypse.

To prepare, they constructed a massive 756-person shelter near Corwin Springs. Followers also built 44 smaller shelters in North and South Glastonbury, near Emigrant.

After church member Vernon Hamilton was arrested purchasing semiautomatic weapons under a false name, national exposure grew. Allegations of brainwashing hit the front pages of newspapers. Some compared the Church Universal and Triumphant to high-profile cults, such as the Peoples Temple led by Jim Jones.

It’s tough to say if they would have ever used the guns.

“I don’t think we would have gotten to that point, but it’s hard to say,” Erin Prophet said. “We definitely went too far.”

Elizabeth wielded a mighty and damaging pulpit. Many followers donated their savings to the cause, moving to Montana to construct bomb shelters.

“It was a mistake,” Erin Prophet said, one that came from placing too much power in the hands of one person.

But, her children say, followers were complicit. They gave up free will to subject themselves to church teachings.

Rapid-fire chanting brought euphoria for church members during the church’s services. They focused on banishing bad energy and using faith to cleanse their spirits.

Yet, unfettered power is dangerous.

“They offered people much more than traditional religion,” Tatiana Prophet said. In Church Universal and Triumphant services, not only does one hear a priest speak of Jesus, “You can go in on a Sunday and see Jesus himself.”

And while there were life-altering mistakes, Elizabeth’s children all say the guru believed she was doing God’s work.

“I think she truly believed in what she was doing,” Erin Prophet said. “I think that my parents believed that they had an approach that could enlighten the world.”

Although he often challenged his mother, Sean helped orchestrate the shelter move. Followers filed into the bunkers, bringing children and a few possessions.

But after the pricey relocation – it cost about $20 million to build the shelters and stock them with seven-years-worth of food and supplies – doomsday, prophesied for March 15, 1990, came and went.

In the aftermath of a hugely failed prophecy, the church began to crumble. Construction costs and months of labor siphoned from followers had taken its toll.

Tatiana, 17 at the time and the youngest of Elizabeth and Mark’s four children, thought it was the end of the world.

“I seriously thought that I didn’t have a future,” Tatiana said.

When they came out of the shelter, Tatiana said, her mother acted as if nothing had happened.

“She just floated along and said, ‘Hello everyone. This is a glorious day.’ And it infuriated me,” she said.

As the church faltered, so did Elizabeth. Elizabeth began searching for answers.

Before Alzheimer’s disease cut her introspection short, Elizabeth admitted her role was, at times, disingenuous. She confessed to some in her inner circle that she did not have the religious sight, Sean Prophet said.

“She acknowledged she had made mistakes,” he said.

The church survives, today, still headquartered on the Royal Teton Ranch at Corwin Springs, north of Yellowstone National Park. None of Elizabeth’s children are actively involved.

Yet, Erin, once poised to takeover as messenger, holds onto comforting rituals. She still practices the meditation and chanting she learned as a child.

“I don’t think it matters if there is God out there, some kind of spiritual outlet is a basic human need,” she said.

Most people Erin Prophet meets today through her work in the quality-improvement department of a Boston hospital have never heard of CUT, Guru Ma or the bomb shelters.

“I really needed to be somewhere where I could be recognized on my own merits,” she said.

Sean Prophet spends a lot of time researching and documenting the church. Tatiana earned a master’s degree in psychology, largely to try to understand her mother, she said.

Another sister, Moira, lives in Santa Monica. In an e-mail to the Chronicle, Moira wrote, “Being born into my family sure has made for an interesting life and I wouldn’t necessarily have it any other way.”

Elizabeth had a fifth child, Seth, who lives with her fourth husband, Edward Francis.

The children continue searching for a deeper understanding of the events that led to the rise and fall of the Church Universal and Triumphant.

Erin agreed. But she also wants people to see the human side of her mom.

Despite all of her failings, Elizabeth cared for her children and taught dedication by example, Erin Prophet said.

“She was a phenomenon, she was an amazing person,” Erin Prophet said. “I would not be the person I am today without her.”

CUT Tries To Weasel Out Of 1990 Nuclear War Prediction

As a former member, one who has struggled with coming to balance with bizarre intensity of CUT to viewing again and again a world where i observe different beliefs coloring the actions of people so they make decisions that end in actions that betray the reality of other people. Okay, what i meant is Looking back and looking out on life i see again and again how i have and how others do act in their world blinded by religious belief. though not taught, i think it true that religion is a dangerous and for many necessary system. How many now are killed in the world, maimed in the world, restricted in the world in the name of "GOD".

I would that all first before taking on the heady drought of religion drink of the cup of charity first. Ie. All religious belief and activity should be measured in the scales of respect and compassion for the life you are interacting with. Simple phrasiology but I hope the meaning is understood.

Amen to that! (Awomen, too.) The only measure of a belief system is the degree to which it encourages people to act ethically. We see a lot of professions of ethics by believers, and unfortunately also a lot of hypocrisy.

The amazing thing is that even in the "hallowed" profession of psychology I have had a "Doctor" report in court that i had strange beliefs for having such a thought. A weird world we live in.