Religulous Is Getting Under The Skin Of Believers
LOGIN
Sunday, November 27, 2022
Top Posts
What’s Up With the Nazi “Black Sun” Rune Wheel?
The Eightfold Path of Denial of Death
Elizabeth Clare Prophet Claimed To Be ‘Clairvoyant’
Why I Left The Radical Secular Podcast
Miss R*EVOLutionaries: Panel Discussion
Money Is Not A “Shared Fiction”
Beliefs About God Won’t Make You Moral
This Is Not Fine!
Wealth Concentration Leads to Feudalism
Is Something Unclear About What’s Wrong With America?
SUBSCRIBE
Archive

Home Film Religulous Is Getting Under The Skin Of Believers

If a film doesn't draw blood, no one tends to object to it 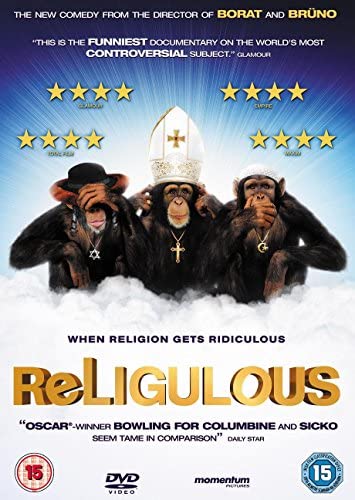 Jacques Berlinerlblau, program director and associate professor of Jewish Civilization at the Edmund A.Walsh School of Foreign Service at Georgetown University, thinks Religulous is like screaming “suicide bomber” in a crowded theater. He makes a lame attempt to act as film critic by comparing Bill Maher to Sacha Baron Cohen. (Kind of obvious, since Borat and Religulous have a director in common, but little else). But what really seems to get his goat is that Maher scores solid points against religious idiocy:

Maher, a talented stand-up performer, is simply not skilled at, or comfortable with, rapidly converting ideological bile into comedy gold. In one scene where he is almost cruelly antagonizing some sort of fellowship of Christian truckers, a beefy driver walks out the door in protest. He exits unmolested. Daredevil Borat would have tried to extend the encounter–perhaps by questioning the trucker’s manhood or challenging him to a duel (using tasers, of course).

Maher is no master of squirm comedy. Maybe this accounts for why Religulous is larded with soundtracks, stock movie footage, captions, sound effects, you name it. These are Maher’s post-production “life lines”–gimmicks that help him cover up the fact that watching two ideologues run head first into one another is not inherently illuminating or pleasurable to watch.

And let there be no doubt, Maher is an ideologue (a point that Andrew Sullivan brought home in a recent exchange with the host of Real Time). His worldview and politics are decidedly New Atheist. This means that he must focus obsessively on religious extremists and oddballs. He must provoke and mock them.

And he must do so while maintaining the peculiar insistence that he actually understands their religion better than they do. Thus, he counters their assertions about the Bible with equally literalist counter-factuals. (Somebody buy Bill a book on the history of biblical interpretation, if only so he would stop assuming that all Jews and Christians read their Scriptures literally. Bill meet Philo of Alexandria. Philo. Bill.)

It also means that he must steadfastly avoid speaking to, or even thinking about, religious moderates. In accordance with the New Atheist creed, they are seen as enablers of religious zealots, or in Maher’s phrase “mafia wives.”

Excuse me if I don’t quite buy Berlinerblau’s impartiality. My comment at the On Faith site:

This is a predictable slam on a brilliant film by a brilliant comic. The author is simply revealing his own self-image as ‘sophisticated’ apologist for religion.

Over and over this defense is repeated. But where is this “real” religion? It doesn’t exist. All religions are based on tales and scriptures of dubious (and very human) origin. All religions privilege personal experience and belief without (or in spite of) evidence.

I love how apologists claim to want to advise atheists on political strategy. “The anger is not working” they say. The “mocking of religious moderates is counter-productive.” Pardon me if this sounds a little disingenuous. I’m supposed to believe that religious apologists actually have the political interests of atheism at heart? It’s far more likely they realize the mockery is in fact working, and they’re trying to do whatever they can to silence it.

Bottom line, as Maher says, religion is based on tall-tales about things like talking snakes. You can’t dress that up in intellectual garb. More and more people are now realizing the obvious absurdity of trying.

After I posted this, the Daily Variety came in the mail: Religulous took in a phenomenal $6,972 per screen on 500 screens for $3.5 million on its opening weekend. Second only per-screen to Disney’s “Beverly Hills Chihuahua.” Some large group of people is showing up to see this movie. Not all of them are ideologues. It’s genuinely funny. Documentaries are cheap to produce. Lionsgate probably made back most of the film’s cost on the first weekend.

A final question: Am I to truly accept the idea that Berlinerblau would have been more satisfied with the film if Maher had more successfully skewered religious moderates?

Red Lenses: What Makes You Angry?

“Be Sealed” Against The Truth

Berlinerbau is a typical stick up the ass critic ! Who cares what he has to say !!!!!! I sure as hech don't ! I see what I want & never pay any attention to critics, I don't need them! They would soon just die off if society would just pay no more attention to them!!!

When it becomes available to rent, u know I'm watching it, many times over! Bill Maher Rules ! I can watch him any day!

I've got my own problems with Maher (like his ridiculous medical opinions or the way he smears atheists' reputation), but I'm slightly optimistic about this film. I don't think you have to be a genius to come off looking more reasonable than religious people. I'll see it when I see it.

Yeah, that’s true. I refer to his humor towards politics & issues. He can really be very funny but even I find my self saying to him “Oh Bil Maher, come on!”. He’s got a humor w/ politics & issues I don’t see much in comedy. Who’s the other former SNL comedian thats now on one of the cable chanels? He’s the other comedian thats really good at political / issue humor. Dioppointed that dude suppotrs Bush though!

Just saw this tonight. Packed house and receptive audience. Very enjoyable and lots of laughs to be had.

Makes me a tad hopeful for the deconversion of moderates.