Atheists Are Constantly Being Asked To Prove God Doesn’t Exist
LOGIN
Sunday, November 27, 2022
Top Posts
What’s Up With the Nazi “Black Sun” Rune Wheel?
The Eightfold Path of Denial of Death
Elizabeth Clare Prophet Claimed To Be ‘Clairvoyant’
Why I Left The Radical Secular Podcast
Miss R*EVOLutionaries: Panel Discussion
Money Is Not A “Shared Fiction”
Beliefs About God Won’t Make You Moral
This Is Not Fine!
Wealth Concentration Leads to Feudalism
Is Something Unclear About What’s Wrong With America?
SUBSCRIBE
Archive

Atheists Are Constantly Being Asked To Prove God Doesn’t Exist

It's not nice to shift the burden of proof 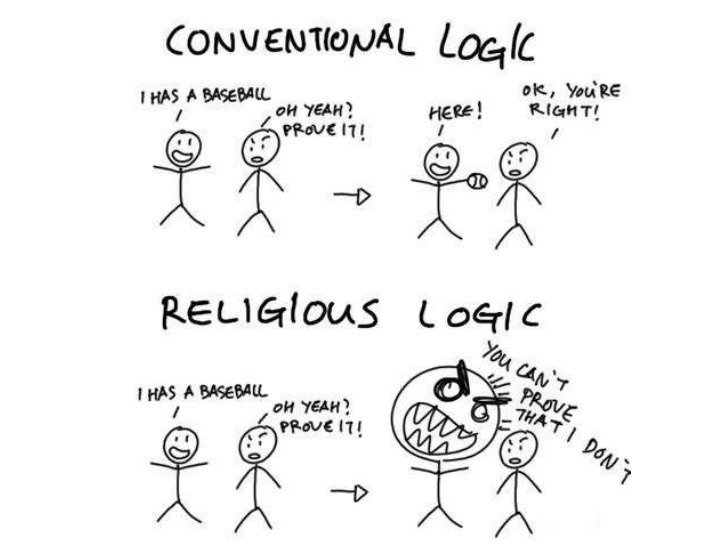 Boiled down, ninety-nine percent of religious apologetics (and for that matter, new-age and psychic apologetics) consists of shifting the burden-of-proof. This comes up so often that it almost seems to be a defense hard-wired into the human brain when presented with any kind of inconvenient factual problem where evidence is lacking. This leads me to wonder what selection pressure might have favored this trait and for what reason. An interesting study for the evolutionary psychologists.

But no matter how often believers tout this tired defense, it never gets any less absurd:

Let’s drill down into this logic a little bit. It’s a far more widespread problem than the old religious canard “You can’t prove God doesn’t exist.” No we can’t prove that. And we don’t have to. Because the entire concept of negative proof is sophistry, which ignores how science works. Science never rules things out, it rules things in. Science correlates observed evidence with theories predicting the conditions under which such evidence should be observed. When the evidence matches the theory, under rigorous conditions, we consider that theory to be highly accurate. But it’s never a final theory. There’s always room for a new theory, if new evidence is discovered which doesn’t match the existing one. In short, science is an ever-evolving process. The term “proof” doesn’t apply broadly to science. It is better limited to narrow fields like geometry.

The class of bad arguments shifting the burden of proof, and the accompanying religious pop-apologetics is also related to the “argument from ignorance.” Which asserts:

…that a proposition is true because it has not yet been proven false or a proposition is false because it has not yet been proven true. This represents a type of false dichotomy in that it excludes the possibility that there may have been an insufficient investigation to prove that the proposition is either true or false.[1] It also does not allow for the possibility that the answer is unknowable, only knowable in the future, or neither completely true nor completely false.[2] In debates, appealing to ignorance is sometimes an attempt to shift the burden of proof. The term was likely coined by philosopher John Locke in the late 17th century.[3][4]

Another way this claim about negative proof is often phrased is “absence of evidence, is not evidence of absence.” It’s trivially true, and it sounds convincing (you can’t look everywhere in the universe for evidence). But it’s also irrelevant. The quality we’re looking for here is falsifiability. This means that if you want to declare something to be “true,” you have to also define what conditions would make it false. The example used in the falsifiability article would be the claim “all swans are white.” In order to falsify that claim, you have to find at least one swan of a different color. The key point is that even if no black or purple swans were to be found, it’s still not possible to say with certainty that “all swans are white.” You can’t look everywhere. Even if there are no purple swans on Earth, there may be purple swans on another planet.

With me so far?

If they say, “well, the purple swans are invisible to everyone except me,” that’s a big reason to doubt their claim.

Now imagine there’s five billion people who say the same thing about God. “God is invisible to everyone who doesn’t believe in Him, and I believe in Him, so I see Him.” Is there any more reason to take their claim seriously?

Carl Sagan doesn’t think so. He used the famous “Dragon in the Garage” analogy.

“A fire-breathing dragon lives in my garage”

Suppose (I’m following a group therapy approach by the psychologist Richard Franklin[4]) I seriously make such an assertion to you. Surely you’d want to check it out, see for yourself. There have been innumerable stories of dragons over the centuries, but no real evidence. What an opportunity!

“Show me,” you say. I lead you to my garage. You look inside and see a ladder, empty paint cans, an old tricycle–but no dragon.

“Where’s the dragon?” you ask.

You propose spreading flour on the floor of the garage to capture the dragon’s footprints.

Then you’ll use an infrared sensor to detect the invisible fire.

“Good idea, but the invisible fire is also heatless.”

You’ll spray-paint the dragon and make her visible.

“Good idea, but she’s an incorporeal dragon and the paint won’t stick.”

And so on. I counter every physical test you propose with a special explanation of why it won’t work.

Now, what’s the difference between an invisible, incorporeal, floating dragon who spits heatless fire and no dragon at all? If there’s no way to disprove my contention, no conceivable experiment that would count against it, what does it mean to say that my dragon exists? Your inability to invalidate my hypothesis is not at all the same thing as proving it true. Claims that cannot be tested, assertions immune to disproof are veridically worthless, whatever value they may have in inspiring us or in exciting our sense of wonder. What I’m asking you to do comes down to believing, in the absence of evidence, on my say-so.

This was also famously clarified by Bertrand Russell, with his thought experiment about a teapot.

Russell’s teapot is an analogy, formulated by the philosopher Bertrand Russell (1872–1970), to illustrate that the philosophic burden of proof lies upon a person making empirically unfalsifiable claims, rather than shifting the burden of disproof to others.

Russell specifically applied his analogy in the context of religion.[1] He wrote that if he were to assert, without offering proof, that a teapot, too small to be seen by telescopes, orbits the Sun somewhere in space between the Earth and Mars, he could not expect anyone to believe him solely because his assertion could not be proven wrong.

Russell’s teapot is still invoked in discussions concerning the existence of God, and has had influence in various fields and media.

So when a misguided god-believer mistakenly thinks they’ve “stumped an atheist” by claiming “you can’t prove God doesn’t exist,” they can be easily dismissed as unserious. And uninterested in the truth.

Another lighthearted attempt by atheists to push back on this foolishness is the Church of the Flying Spaghetti Monster.

Finally, xkcd got in on the act, proposing launching an actual Russell’s Teapot.

** Brilliant ** encapsulates the whole argument in one little cartoon.

Great cartoon. My favorite thing ever written about this phenomena was Sagan’s “Dragon in the Garage” essay from The Demon-Haunted World. Blogged about it a long time ago at http://www.religiousbullshit.com/2007/06/hightime_to_fan.html

A scientist has made a device that creates religious/mysical experiences. He calls it the “God Helmet”.

Basicaly, it shoots electromagnetic waves into your brain in a pulse. After a few minutes, 80% of participants in the studies reported mystical experiences.

The study reveals that throughout evolution, a part of the brain became hard-wired to have these experiences, possibly as a way to release anxiety about death. Of course, religious people cite the experiment as “proof” of God, saying “He must have put that there for a reason!”

What I draw from the study is that we have proof that believing in God is purely natural. Worshiping, fear of death etc. is as natural as any other instinct we have.

It seems illogical to me to believe in God or anything “supernatural” based on the lack, er, absolutely no evidence.

However, the hatred and superiority complex that fills the comment sections in these pages and the general state of mind most Atheists possess today, is close minded, stereotyping and condescending.

And perhaps we (the atheists) are the weird ones. It is in our DNA to want to worship something, or at least believe in something bigger. It could be argued that we are denying a biological imperative with our disbelief, that we, are unnatural.

NO!
THE YIN THE YANG IS IN ACTION HERE
WE R DOING WHAT IS NATURALLY CIVIL TOWARDS THE HYSTERIA OF RELIGIOUS FANATICS
THIS CARTOON DOESN’T REFER TO CALM PEACFUL CHRISTIANS WHO DON’T SHOVE THEIR BELIEFS IN OTHER PEOPLE’S LIVES OR FACES !
THIS CARTOON MOCKS THE VIOLENT MENTAL ONES WHO NEED PSYCHOTHERAPY !
I UNDERSTAND UR INTENSIONS
BUT GET FOR REAL
THIS ISN’T BEING BROADCASTED ON EVERY TELEVISION CHANNEL OR RADIO STATION
LET ALONE PUBLISHED
ANYONE COMING TO THIS SITE KNOWS WHAT IT’S ABOUT & RELIGOUS INDIVIDUALS HAVE THEIR FUN TO AGAINST THE ATHEIST’S!!!!!!
PLAYFUL HUMOR TO THE STRESS OF THE SITUATION
BETWEEN THEIST’S & ATHEIST’S IS HEALTHY !
SHOVING THEISM IN PEOPLE’S LIVES IS NOT !
GOD IN THE PLEDGE OF ALLEGIANCE, COURT ROOMS & DOLLAR BILL
IS SHOVING IT TO PEOPLE’S FACES & LIVES!
NO ONE IS SHOVING THIS CARTOON TO THEIST’S !

LISTEN 2 ME, MY EPEEN IS PROOFEN BY THE SIZE OF MY ALL CAPS L2BLOG N00B

L.E.P.
NO THK U FOR WASTING MY TIME, EVERYONE’S TIME FOR THAT MATTER.
UR WEB PG IS USELESS AS UR COMMENT : >’

Do your parents know you are on their computer?

Bulldada & L.E.P., u two have got to be registered sex offenders by the way u comment !
I don’t believe u have any women in ur life or u wouldn’t be taking any effort to type useless comments.
Man what a pig stye ur places must be !!!!!!!

Flava F. very funny = ) ! thks really, I laughed, had fun reading ur added remark for lighting up the situation of our juvenile delinquency ! boyeeeeeeee !!!!!!!!!!!!!!! Smiles !