Consumer Demand Is Fully Responsible for High Oil Prices
LOGIN
Sunday, December 4, 2022
Top Posts
What’s Up With the Nazi “Black Sun” Rune Wheel?
Elizabeth Clare Prophet Claimed To Be ‘Clairvoyant’
The Eightfold Path of Denial of Death
Why I Left The Radical Secular Podcast
Miss R*EVOLutionaries: Panel Discussion
Money Is Not A “Shared Fiction”
Beliefs About God Won’t Make You Moral
This Is Not Fine!
Wealth Concentration Leads to Feudalism
Is Something Unclear About What’s Wrong With America?
SUBSCRIBE
Archive

Why isn't this obvious? 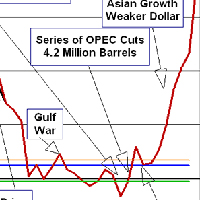 Finally some straight talk from the conventional media (USA Today) about the true source and nature of our energy woes.So many hopes are pinned on some silver bullet that will magically put more oil on the market at a lower price, if only we can get rid of ___________ (insert culprit here). Sadly, OPEC, the oil companies, environmentalists, Bush, Congress, Hugo Chavez or whoever else you’d like to blame did not create the problem, and therefore cannot solve it.

So who’s to blame for record high oil prices?

In public opinion polls, oil companies get fingered as Public Enemy No. 1 by one-third to one-half of respondents. The other leading culprits include the OPEC cartel, President Bush, environmentalists and speculators.

Not one of them is as culpable as their critics claim. More important, none is capable of solving the problem, making the finger-pointing a destructive distraction.

As the editorial rightly points out, limits on global supply (the beginnings of the dreaded “peak oil”) have combined with rampant growth in China and India to create a market that has just begun to tighten. Unlike past energy crises, where the U.S. imported its way out of the problem, this one is global in scope, and will be painfully with us all for at least a 10-20 year energy transition.

Denial of this problem has reached religious proportions among many Americans, and especially the clueless SUV set. The stench of American exceptionalism about energy is almost as foul as our national superstitions. But unlike religion, which has no upper bound on its level of reality-distortion, the energy transition is set to bite us all–hard. I have to admit a certain schadenfreude at watching oil prices rise. People have been talking about the need to conserve and develop alternatives as long as I’ve been alive, and always cheap and dirty oil has reared its tarry head to bolster complacency and stand in the way of progress. That is now changing, and quickly.

We had all better get used to the facts at hand. No amount of domestic drilling or foreign adventurism will save the happy motoring wasteland in which Americans have spent the past hundred years.

The good news is that if we respond properly, it’s all going to be OK!

We’ve been fed the lie that high oil prices will kill the economy. But it’s just not true. The last time we had an oil price runup was in 1979. That protracted spike led to a drop of nearly 20% in U.S. demand by 1982! Today that would be the equivalent of over 4 million barrels a day saved. What happened to the U.S. economy? Sure there was a recession in 1982. But overall GDP between 1979 and 1998 (the date oil consumption exceeded 1979 levels) approximately doubled! This is stunning, not just because it proves we can do more with less, but because just 10 years ago, we were already doing it.

Let me say that one more time: In 1998, we were using the same amount of oil we did in 1979 and creating double the economic output!

Then, with oil selling for a modern historic low well below $20/barrel in the late 1990s (look it up), everyone decided they needed twice as big of a car. The 2000s have been the decade of terrorism and the Iraq war. Coincidence? I don’t think so. So I’m looking forward to a little petro-realism, and along with it some progress in the way we Americans get around. A cleaner world with less CO2, less involvement with dictatorial regimes, (and a U.S. that is respected around the world instead of hated and feared), more domestic jobs and a reduced trade deficit are in store if we get this right.

I don’t have to spell out what happens if we get it wrong.

As gratifying as it is to point fingers elsewhere, the mirror is the main place to look for the reasons that oil prices are hovering around $125 a barrel. The nation decided to let the laws of supply and demand work. It was rewarded with two decades of low prices that led to larger cars, bigger homes and longer commutes. Meanwhile, with the Cold War’s end, Third World countries suddenly saw the benefits of capitalism, fueling robust growth in places such as China and India. As in the West, oil fuels that growth, first for industry, then for consumers who, naturally enough, use rising incomes to buy cars. That trend more than anything else is behind rising prices. And it has just begun.

A keep-energy-cheap approach would have worked if supplies were unlimited and prices didn’t tend to lurch forward, as in the 1970s and now, rather than to rise gradually.

An alternative would have been energy policies that discouraged consumption with gas taxes and subsidized alternative sources. But doing this would have required voters to be willing to accept short-term pain for long-term gain. It would have required leadership, vision and political courage — the very same qualities needed now to stave off menacing crises in health care and Social Security.

Ominously for the nation, those characteristics seem in even shorter supply than oil.

Why I Moderate Comments

Well, yes, leadership and effective policies will avert the coming energy crysis, but what about the big picutre? Don’t you see that if americans change their lifestyle, the terrorists will win? I mean, Blacksun, really! Do I have explain even the simplest things to you?

In recent weeks I have managed to keep my gasoline consumption down to a quarter of a tank per week, but I’m afraid that is about the best I can do given my circumstances.

A while ago, the Onion had a headline sports article: “No S***: Barry Bonds and Steroids”.

This is more or less what was running through my mind here.

If you want a bit of optimism, gasoline demand in the States has actually decreased a few percent recently.

Right now, I enjoy watching oil prices rise. There’s no doubt in my mind that it’s a very good thing for the years ahead…to hopefully prevent a global catastrophe.

In Europe, gas is almost $9/gallon. We’ve been spoiled too long…and that makes the necessary transition especially difficult.

Hopefully the sooner-rather-than-later shock to American drivers will facilitate both investment in alternative energy sources as well as a much-needed reduction in consumption.

I’ll never forget listening to G. Gordon Liddy’s radio show sometime during the Clinton years…when a woman called in to ask advice for buying a car.

He enthusiastically recommended buying the biggest SUV she could afford instead, for better protection in case of an accident. Then he bragged about his Corvette ZR1 and some big SUV he had and explained, essentially, that it was the “American way.”

I suspect he might have a small penis. He’s also a big McCain supporter…as well as a criminal and–(most people don’t know this)–a part of the axis of evil.

Well, the big problem we face is the agriculture and fishing industry, which is outdated in technological and fuel terms, and is in a desperate position to even face these problems. Of course, in the long run, it shouldn’t be a problem. The market will posit these activities better suited than vacation transport, but the market ain’t perfect, and there are a lot of bandits and speculators which could drive much of the population into sheer poverty because of this crisis. I foresee the disappearance of the middle class into the lower class. Of course, this lower class will have tvs, iphones, computers and internet. But it will also be poor. What a great contradiction! And yet, this is what I see coming.