Why I Moderate Comments
LOGIN
Monday, December 5, 2022
Top Posts
What’s Up With the Nazi “Black Sun” Rune Wheel?
Elizabeth Clare Prophet Claimed To Be ‘Clairvoyant’
The Eightfold Path of Denial of Death
Why I Left The Radical Secular Podcast
Miss R*EVOLutionaries: Panel Discussion
Money Is Not A “Shared Fiction”
Beliefs About God Won’t Make You Moral
This Is Not Fine!
Wealth Concentration Leads to Feudalism
Is Something Unclear About What’s Wrong With America?
SUBSCRIBE
Archive

Home Religion Why I Moderate Comments

Why I Moderate Comments

Disqualifying statements and personal attacks have no place in rational discussion 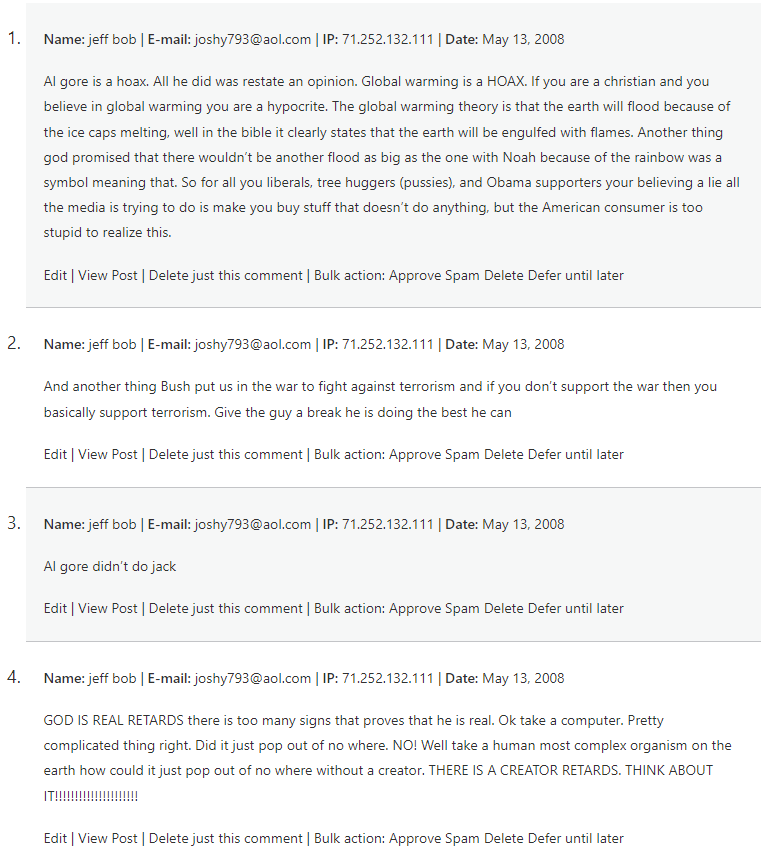 “It is impossible to defeat an ignorant man in argument.”
– William G. McAdoo

Therefore, consider it a reiteration of why I have comment moderation in place. I’ll not subject my readers to such absurdity–except to roundly mock it. Also a warning to all religious trolls: I have no qualms whatsoever about publishing your email and IP addresses.

This also brings up another point. Many religious people are embarrassed by comments like jeff bob’s. They use such egregious examples of insanity as a way to make themselves appear “reasonable” in comparison to the ranting raving extremist. But actually, jeff bob is a more typical example of the believer mindset than most would like to admit. Once a believer has thrown the need for evidence to the winds, and is willing to go along with groupthink of any sort–in the words of Matt Taibbi–he or she is “thinking with muscles, not neurons.”

For a good belly laugh, here’s the entire Taibbi quote:

By the end of the weekend I realized how quaint was the mere suggestion that Christians of this type should learn to “be rational” or “set aside your religion” about such things as the Iraq war or other policy matters. Once you’ve made a journey like this–once you’ve gone this far–you are beyond suggestible. It’s not merely the informational indoctrination, the constant belittling of homosexuals and atheists and Muslims and pacifists, etc., that’s the issue. It’s that once you’ve gotten to this place, you’ve left behind the mental process that a person would need to form an independent opinion about such things. You make this journey precisely to experience the ecstasy of beating to the same big gristly heart with a roomful of like-minded folks. Once you reach that place with them, you’re thinking with muscles, not neurons.

So can we finally just please agree that the phrase “rational Christian” is an oxymoron?

So can we finally just please agree that the phrase “rational Christian” is an oxymoron?

Also, if joshy793@aol.com isn’t pre-teen and on his daddy’s computer… wouldn’t be the first time I’ve been fooled by an adult communicating in this fashion. ;)

This reminds me of the recent This American Life Episode with Ira Glass, where an Iraqi student on scholarship in the US, (who was still living in Iraq at the time of the invasion, and whose family members remain), sets up a lemonade stand like booth with a placard reading “Ask An Iraqi”. The number of idiotic questions Americans asked boggle the mind: :”Are there fat Iraqi’s?” to others TELLING the Iraqi guy just how the U.S. invasion is REALLY affecting the average person, and why the American presence is making things so much better. The nerve of these people to sit in his face and TELL HIM how it is! It’s this kind of arrogant idiocy that makes me embarrassed to be American. Still, the young Iraqi maintained his composure while trying to gingerly educate them, pointing out a few inconsistencies in their statements…( none of which seemed to pierce the thick fog of their self delusion) without saying directly…look at the sign you dolts…I AM one of “them”. That’s my home. YOU should be asking me about the reality! …but he knew better.

Anyway…like Taibbi and you said Black Sun, in cases such as these and this recent commentator, all independent thought is nonexistent, and it is serious problem.

Yes, but your policy denies your readers a great source of entertainment. :) Thanks for sharing the “best of.”

Wow.
I see a tree in front of me. That is clear evidence of God right Jeff Bob.
I mean… how else can you possible explain it?

Oh I forgot to ask. When abouts is this big fire that engulfs the Earth going to take place?
I just want to make sure I’m in a boat in the ocean.