Variety Gives ‘Intelligent Design’ Way Too Much Credit
LOGIN
Sunday, December 4, 2022
Top Posts
What’s Up With the Nazi “Black Sun” Rune Wheel?
Elizabeth Clare Prophet Claimed To Be ‘Clairvoyant’
The Eightfold Path of Denial of Death
Why I Left The Radical Secular Podcast
Miss R*EVOLutionaries: Panel Discussion
Money Is Not A “Shared Fiction”
Beliefs About God Won’t Make You Moral
This Is Not Fine!
Wealth Concentration Leads to Feudalism
Is Something Unclear About What’s Wrong With America?
SUBSCRIBE
Archive

A painful dookie squeezed out of the Christian persecution industrial complex 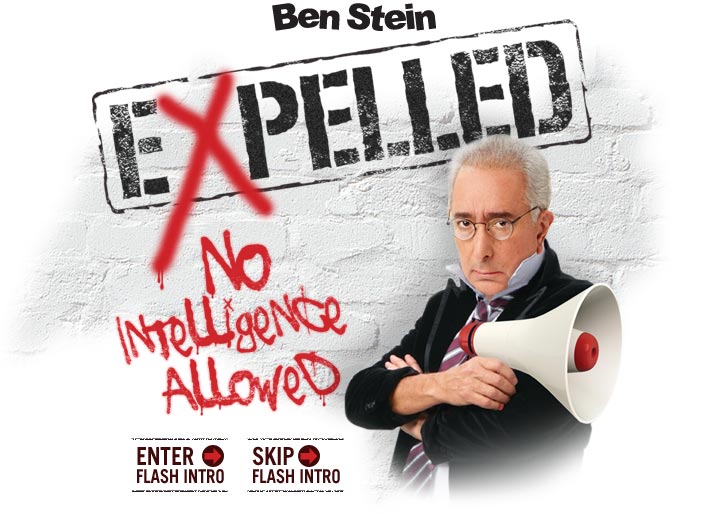 Variety is my bible.It’s indispensable daily reading in my business. Which is why I was so incensed by their Expelled review. The whole imbroglio is such a groaner, I hate to even waste my time. The film is simply one more forgettable propaganda piece created for church screenings and summer Jesus camps, harping on the only note creationists seem to have left in their repertoire, “teach the controversy.” But even this modestly successful strategy finds them continuing to wallow in outright deception. Since their entire premise is a blatant lie, I’m sure it’s not that hard to feel OK about lying in support of it.

Stein, Frankowski, Craft, Ruloff, Sullivan and the entire crew over at Rampant Films have brought shameless and cynical pandering to a new low. Their fraudulent interviews of PZ Myers and Richard Dawkins, their ham-fisted expulsion of Myers from a screening, and their outright theft of John Lennon’s Imagine are only the beginning. From countless reviews (including this one), Expelled itself is a disjointed and unskilled piece of film making–woefully unfit to challenge the overwhelming evidence on the side of evolution. But not only does their poor effort leave science untouched, the producers of Expelled have set themselves up to be mocked, pilloried, and publicly flogged (figuratively) for their monumental artlessness.

Instead, Variety’s Justin Chang wrote them a milquetoast postmodernist take-no-sides review, (that of course ended up being far too charitable). He begins:

There’s an intelligent case to be made for intelligent design, which is why “Expelled: No Intelligence Allowed,” a flimsy attempt to discredit Darwinist theory as the cornerstone of modern biology, reps such a missed opportunity. While roving interviewer Ben Stein extracts some choice soundbites from scientists on both sides of the creation-vs.-evolution debate, the film’s flippant approach undermines the seriousness of its discourse, trading less in facts than in emotional appeals. A probable punching bag for film critics and evolution proponents alike, docu will be a natural selection for Christian audiences and should spread like the gospel on homevid.

Really, Justin? There’s an intelligent case to be made for intelligent design? There’s a debate? Care to state the case or even provide a link? Of course not. Writers like Chang are the useful relativist idiots who can’t believe anyone has the right answer to any question–ever. It’s all so controversial, you see–roughly 150 years after The Origin of Species was published. And of course, in typical two-sides-to-every-story fashion, consensus scientists have now been reduced to “evolution proponents.”

“Freedom is the essence of America,” he drones, his point being that the freedom to dispute Darwinism has been quashed by a scientific community that treats evolution as fact, not theory. Pic effectively argues that the debate is often shut down before it can even begin, rattling off a laundry list of scientists (among them Richard Sternberg, Caroline Crocker and Guillermo Gonzalez) who have lost grants, teaching posts and academic standing for expressing their views that life did not originate by random chance.

What do you do with a paragraph like that? First, evolution is both a fact and a theory–which highlights the public misunderstanding of both terms. But second, let’s answer the charge. The ‘scientists’ who were “expelled” were fired for cause: spouting unscientific drivel as egregiously wrong as if they had “expressed the view” that the the moon was made of green cheese. I can hear them now “Have you been there? Do you know for a fact that it’s not green cheese?” You can’t say things like that as a tenured professor at a respectable university. Remember, universities are places of learning. If you flat-out refuse to learn, you can’t stay there. This in a nutshell kills the entire premise of Expelled. Facts matter in academia–and everywhere else.

Stein does find some eloquent ID supporters in movement co-founder Stephen C. Meyer, Paris-based mathematician David Berlinski and Oxford professor Alister McGrath, who argue that scientists have become slaves to their own dogma, willingly misreading the evidence to support their claims. Pic is most compelling when it contrasts this level-headed reasoning with the vitriol of evolutionary biologist Richard Dawkins, whose brief screen time constitutes a thorny, fascinating study of atheism taken to hateful extremes.

The Dawkins ad hominem again. What exactly did Dawkins say? Can’t quote it, can he? Because of course Dawkins didn’t say anything hateful. But it must feel so good for Chang to repeat a charge he’s heard other people make, and it keeps him so safely above the fray (“those silly hateful scientists”) When you’ve got such good copy, why bother with accuracy? And he also didn’t even bother to mention that Alister McGrath is hardly an unbiased source, having penned not one but two books attacking Dawkins, one called The Dawkins Delusion. There’s no excuse for that kind of omission in the age of Google.

Finally at the end of the review, we get table-scraps of substantive critique:

First-time director Nathan Frankowski strikes a relentlessly jokey tone throughout, using black-and-white film clips as comic punctuation (after news of a professor’s axing, pic cuts to a shot of a guillotine). In addition to being just plain irritating, this jittery style seems to reinforce the perception of the pic’s target audience as a bunch of intellectual lightweights.

Even more offensive is the film’s attempt to link Darwin’s “survival of the fittest” ideas and Hitler’s master-race ambitions (when in doubt, invoke the Holocaust), complete with solemnly scored footage of the experimentation labs at Dachau. Evocations of the Berlin Wall, treated as a symbol of a bullheaded scientific establishment on the verge of collapse, are equally fatuous.

Heavily sampling footage from classic films (including “Inherit the Wind,” natch), “Expelled” is technically well-mounted, though its aesthetics trump its ideas at every turn. If evolution is worth debating, it’s worth debating well, and by a more intelligently designed film than this one.

Oh. A film more intelligently designed…I get it.

And the dead-obvious puns keep on coming to the bitter end. Proving that the red states and Hollywood are more alike than different–strong on style, short on substance. And shallow cleverness and creationist fantasies will continue to outshine those dreary facts every time. Natch.

Responding To “The God Delusion” With “The Delusion Of Disbelief”

Quite so… and indeed it gets even worse. None of the three you mention (Sternberg, Crocker and Gonzalez) are examples of scientists being fired.

Sternberg lost nothing except respect.

Gonzales failed to get a tenure for which he applied, and there’s heaps of good reason for that having nothing to do with ID. We can’t know the actual reasons of a private panel, but his research output, and grant input, and student supervision, were all of a kind that is going to cause problems with tenure applications. Lots of people have unsuccessful tenure applications; despite having better qualifications than Gonzales.

Crocker was instructed not to teach nonsense outside of the curriculum she was hired to teach. She did not lose her teaching contract, and continued teaching those courses even after the issues with teaching inappropriate pseudoscience in courses were raised and resolved. She was simply told to stick to the subject matter. She was on a short term contract, which continued to run through to full completion. There’s no way I’d want to see someone like that re-hired; but even in the normal course of events there’s nothing exceptional about not being offered a new position after completing a limited term employment contract.

None of these examples were fired. None were expelled. For more details, a good starting point is The Truth behind the Fiction at “Expelled Exposed”. The whole premise of Expelled is a deliberate gross distortion of the facts.

But not against an outright fraudulent notion like ID or Creationism.
Evolution as a theory can only discussed based on the premise of natural selection (we also might want to include selection by human agency) – there is simply no evidence for anything else.

The amount of idiocies floated by utter nincompoops is simply astounding. Would those idiots try to debate quantum physics ? No, but without reading about it and educating themselves about the theorie and its by now vast evidential basis, every one of those nincompoops allows himself to have an “opinion” about it .

every one of those nincompoops allows himself to have an â€œopinionâ€ about it .

I refer to the theory of evolution – although I have heard similar things by the unilluminated about the impossibility that something like quantum physics has any basis in reality, but to a far lesser extent.

I’m wondering if Chang even saw the actual movie. I’m guessing more than likely he didn’t wrote this entire “review” based on what’s already posted on the web since his take-no-sides view does do a decent job of proving not only does he take no sides, he can’t write copy well either. It’s so back and forth and all over the place, one must think he cobbled this together from copy/pasted bits of actual reviews about the movie. It seems very disjointed.

Actually, ill-considered drivel gets posted about quantum physics all the time, most of it concerned with how it might allow us to ‘all be energy’ or ‘transcend space’ or, in conjunction with Godel, how we cannot *know* anything. Silly little things like the way quantum physics makes predictions and, sweet mother of horror, get’s them right, are ignored. Go fig eh what?

Can you blame them for pandering to their (perceived) audience, when even our political candidates feel inclined to do the same? Rhetorical question, because of course you can, and should. Thanks for unpacking this drivel.

Sean, OT, Your article, “Rush Saved Me (and my kids)” which is one of my all-time favorites, isn’t currently on line.

Siamang, it’s back up now. Don’t know how that happened.