The Misanthropic Fury of Chris Hedges
LOGIN
Monday, December 5, 2022
Top Posts
What’s Up With the Nazi “Black Sun” Rune Wheel?
Elizabeth Clare Prophet Claimed To Be ‘Clairvoyant’
The Eightfold Path of Denial of Death
Why I Left The Radical Secular Podcast
Miss R*EVOLutionaries: Panel Discussion
Money Is Not A “Shared Fiction”
Beliefs About God Won’t Make You Moral
This Is Not Fine!
Wealth Concentration Leads to Feudalism
Is Something Unclear About What’s Wrong With America?
SUBSCRIBE
Archive

The Misanthropic Fury of Chris Hedges 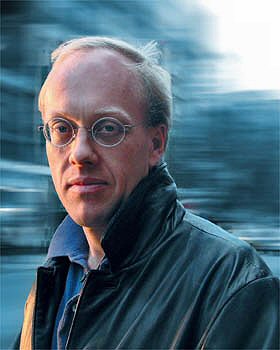 Ebonmuse at Daylight Atheism recently gave Chris Hedges–author of I Don’t Believe in Atheists–a good thumping.Now David Swanson has posted another excellent deconstruction of Hedges ridiculous arguments. That Hedges has won a Pulitzer Prize and that he gets repeatedly published is only proof of the widespread lack of critical thinkers and the absence of any bullshit patrol.

Hedges’ tactic, used throughout this essay, is to invent a severely distorted or outright fictitious viewpoint, assert that all atheists hold it exactly as he describes it, and then attack them savagely for supposedly doing so. This is a good example. I would very much like to know which atheists “fail to grasp” humanity’s capacity for evil; predictably, Hedges gives not a scrap of confirmatory evidence. To anyone with even a passing familiarity with modern atheist arguments, our acknowledgement of humanity’s dark side is all too obvious. All the authors he excoriates spend ample time describing the horrors that humans have committed, often in the name of faith. Who does he fantasize is denying this? The lethal danger that unchecked faith can wreak, and has wrought, is very much the centerpiece of our arguments. (Sam Harris, if I recall, writes that The End of Faith was conceived in the first days after 9/11.) It is the primary reason we believe decisions must be made on the basis of reason and compassion, rather than on dogma or tribal instinct.

Finally, Hedges’ central criticism is that we atheists believe in moral progress. This is a dangerous fantasy, he says, because the dream of utopia inevitably leads to the slaughter of those who do not share it. Instead, he argues that the only safe route is to accept that humans are incurably evil, that human nature cannot be changed, and that there neither is nor has there ever been any moral progress of any kind, and the sooner we accept this the better off we’ll be. I am not making this up. Here it is in his own words:

The utopian dream of a perfect society and a perfect human being, the idea that we are moving toward collective salvation, is one of the most dangerous legacies of the Christian faith and of the Enlightenment.

… They peddle the alluring and enticing fantasy of inevitable moral and material progress. This vision is not based on science, history or reason. It is an act of faith. It is a form of the occult.

…There is nothing in human nature or human history to support the idea that we are morally advancing as a species or that we will overcome the flaws of human nature. We progress technologically and scientifically, but not morally. We use the newest instruments of technological and scientific progress to create more efficient forms of killing, repression, and economic exploitation and to accelerate environmental degradation as well as to nurture and sustain life. There is a good and a bad side to human progress. We are not moving toward a glorious utopia. We are not moving anywhere.

It’s not ultimately clear what Hedges is demanding, unless it’s that we should all be as bleak and nihilistic as him, and abandon any hope of moral improvement or otherwise changing our situation for the better. Whatever the reason for Hedges’ irrational fury, the fact remains that today’s atheists are offering people reasons to hope and to work for the better, while he is only offering reasons to despair and surrender. This view has proven to be false every time it has come up in the past. If he wishes to cling to it, he’s welcome to fall by the wayside. The rest of us will be working to loosen the grip of dogma on the human mind and, by bringing about a viewpoint of reason in its place, to gradually change our world for the better.

Belief in theism, on the other hand, can have serious consequences. In fact, theism is unavoidably a simplistic and utopian vision. It may not result in adoption of any other simplistic visions, and it may not result in the use of force, but it does put one’s mind in the habit of accepting nonsensical wishful thinking. Theism includes a “belief” that something called a god controls the world, and usually includes a “belief” that death is not real. Some of the most admirable people in the history of the world and living today have held these beliefs, and some of them have not. But these are beliefs that tend, as a rule, to encourage acceptance of the status quo, to discourage personal responsibility, and to put one in the habit of believing transparent falsehoods. That many people overcome these influences, with various degrees of success, does not make them less real.

Theism has a damaging influence on human thought and action, and the existence of different flavors of theism provides a justification for hatred and murder. If Iraqis were all Christians, millions of them would probably still be alive. The United States would probably not have done to Iraq what it has done over the past two decades. And the idea that Iraqis could govern themselves if left free to do so would be far more apparent to many more Americans. The entire “global war on terror” would collapse without Christianity and Islam.

I’m not agreeing with the millions of Muslims around the world who believe the primary motivation of U.S. crimes to be hatred of Islam. I think their religious identity blinds them to the tragic fact that the United States is attacking Islam because it is situated overtop of vast oil supplies. But it would be harder for the United States to attack the possessors of oil if they shared a religion or a lack thereof with Americans.

I can only add to this that I’ve run across these types of arguments before. When you peel back the surface layers, you begin to realize there is no other description for Hedges anti-human rhetoric. Somehow on an intellectual level, the misanthropes understand competition and natural selection in lower animals, but not humans. Lions can viciously tear apart their prey all day long, and it’s noble. But human conflict, deception, and manipulations are somehow seen as uniquely evil.

I can understand holding humanity to a different ethical standard–because we have the reasoning ability that animals do not. But then shouldn’t such an idealist be making the case for a reason-based humanistic ethics? Oh, right. Moral progress is an “act of faith, a form of the occult.” It strains all credibility that Hedges attacks reason–the very thing that could actually put the brakes on human savagery.

In so doing, he defends the very superstition and tribalistic thinking that have long gotten humanity in trouble in the first place.

Update: Hedges has continued to be predictably wrong about almost everything for the past 15 years. It’s become a bit of a sport for me every time he writes a new article or tweets. He’s routinely attacked Democrats as long as I can remember, even though he also constantly rails against Republicans. Well, who’s going to beat the Republicans in US politics, if not the Democrats? He outrageously sided with Russia’s dictator Vladimir Putin, blaming this year’s Ukraine War on “NATO provocation,” and his latest screed is called “We Won’t Be The First Civilization To Collapse, But We Will Probably Be The Last.” Right. Apocalypticism squared. Not only is our civilization doomed, but there won’t ever be another. Until that collapse actually happens, you’ll be able to count on getting your dose of wrongness dished out on the regular from Hedges. Yee-haw. –Sean Prophet, August 2022

“Everyone Believes in Something”

In so doing, he defends the very superstition and tribalistic thinking that have gotten humanity in trouble in the first place.

Of course he does! He is an apologist for theism, and one of the more shameless ones.