Catholic Identity More Important than Helping Needy
LOGIN
Sunday, December 4, 2022
Top Posts
What’s Up With the Nazi “Black Sun” Rune Wheel?
Elizabeth Clare Prophet Claimed To Be ‘Clairvoyant’
The Eightfold Path of Denial of Death
Why I Left The Radical Secular Podcast
Miss R*EVOLutionaries: Panel Discussion
Money Is Not A “Shared Fiction”
Beliefs About God Won’t Make You Moral
This Is Not Fine!
Wealth Concentration Leads to Feudalism
Is Something Unclear About What’s Wrong With America?
SUBSCRIBE
Archive

Actions demonstrate that church hierarchy cares more about maintaining discrimination, than the poor 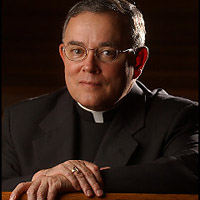 T he Catholic News Agency is running a story of which it should be clearly ashamed.Should we be the least bit surprised? We are seeing once again a (sort of) startling admission from near the very top of the Catholic hierarchy. Archbishop Charles Chaput of Denver, Colorado has threatened to end the Church’s services to the poor and needy if the government forces it to adhere to anti-discrimination rules covering sexual orientation.

As I’ve long maintained, religious charity is a loss-leader for the religion’s main product–conversion. It’s hardly a disinterested gift to the poor. Churches figured out a long time ago that by providing a smokescreen of humanitarianism, they could better attract the compassionate able-bodied labor force they need, as well as the wealthy philanthropists and the guilty lost-souls. It’s the uber-cynical ploy of all time. What do a few soup kitchens cost when the payoff is measured in lifetime commitments? But try telling that to a believer, and you’re liable to experience a firestorm of protest and a profusion of professions of purity, altruism, and selfless brotherly love.

Now we have the straight truth from the horse’s mouth: Archbishop Chaput insists the church will “end its services” to the poor if it is forced to hire LGBT employees (or presumably women). That’s right. Just to make sure you got that, he follows it up with the kicker “This is not idle talk. I am very serious.”

It seems a single verse in Romans 1 is more important to these hypocrites than the Sermon on the Mount or hundreds of other places in the New Testament where Catholic superhero Jesus talks about the importance of helping the poor.

HB 1080, the archbishop believes, would hinder Catholic non-profits from hiring or firing employees based on the religious beliefs of the Catholic Church. Though recognizing that many non-Catholics work at Catholic Charities, Archbishop Chaput said the bill would remove the ability of the non-profit to maintain a Catholic leadership.

The need to preserve Catholic Charities’ Christian identity was so important that the archbishop warned that the non-profit’s cooperation with the government would cease if regulations impeded its Catholic mission. Speaking of Catholic Charities, he wrote, “When it can no longer have the freedom it needs to be ‘Catholic,’ it will end its services. This is not idle talk. I am very serious.”

Well archbishop, you hang yourself quite nicely with your own words. Color me not shocked. In the article, Chaput also recites a not so vague anti-Semitic conspiracy theory that the Anti-Defamation League (read, Jews) are behind this so-called legal “persecution” of Catholic identity. Of course, if HB 1080 passes, Catholics will grumble, but continue on with the charitable recruitment game, anyway. It’s all they have going.

Update: The Catholic Church and other religions have been much more successful recently since 2020, at exempting themselves from non-discrimination laws. The Supreme Court’s lurch to the right under the Trump Administration has seen to that. –Sean Prophet, August 2022

Elizabeth Clare Prophet Did Not Have ‘Secret Bank Accounts’

Überhypocrisy, thy name is dogma.