Disbelief In God Is The Opposite Of Totalitarian: It’s Liberation
LOGIN
Thursday, February 2, 2023
Top Posts
Elizabeth Clare Prophet Claimed To Be ‘Clairvoyant’
What’s Up With the Nazi “Black Sun” Rune Wheel?
The Eightfold Path of Denial of Death
Miss R*EVOLutionaries: Panel Discussion
Why I Left The Radical Secular Podcast
Money Is Not A “Shared Fiction”
Beliefs About God Won’t Make You Moral
This Is Not Fine!
The Most Consequential Social Difference Between American Christians And Atheists
Is Something Unclear About What’s Wrong With America?
SUBSCRIBE
Archive

Home Atheism Disbelief In God Is The Opposite Of Totalitarian: It’s Liberation

It is the believer who demands loyalty, obedience, and submission, not the disbeliever 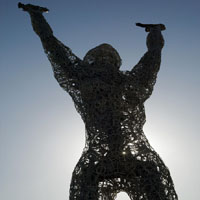 Man and God, From the UK Times Online

It has been a good year for atheists. Richard Dawkins’s book The God Delusion has sold more than a million copies, and between April and June was Britain’s fourth best-selling title, beaten only by two Harry Potter books and Gordon Ramsay. Christopher Hitchens, whose God is Not Great also excoriates religion as poison, has been given free rein on television and in debating halls….And the new leader of the Liberal Democratic Party has admitted something unsayable only a decade or two ago: that he does not believe in God.

Science, they point out correctly, does not have a monopoly on progress, nor religion on backwardness. Were not the two greatest monsters of the 20th century, Hitler and Stalin, both driven by what they believed a “scientific” ideology: the purging of “healthy” races from dangerous impurities, in Hitler’s case, or Stalin’s violent attempt to reconstruct society according to a flawed understanding of genetics? Defenders of the faith have also accused the atheists of the same fundamentalism that they impugn to their enemies: a dogmatic refusal to admit that “progress” has often been the achievement of profoundly religious people – including the atheists’ iconic Isaac Newton – who have been pioneers in science, democratic idealism and human rights.

For doubt admits the viability of other views, and that is the basis of wisdom and tolerance. Faith has to accommodate to the world around – to the evils, the uncertainties, the depths of human misery. Totalitarianism can be as much a danger to faith as it can be to secular society.

This, surely, is where the new militant atheism is wrong. It is totalitarian in its prescription for human happiness…Above all, an ideology – for atheism is an ideology – that cannot see its own scientific limitation cannot claim to be scientific. Those modish atheists who claim to understand the panoply of religious experience, or myth as they would have it, are, in the words of a critic, like “someone holding forth on biology whose only knowledge of the subject is The Book of British Birds.” Similarly, a claim to know what Einstein admitted was the unknowable about the existence of the universe cannot be made by anyone who is himself a human and therefore part of that universe.

The spiritual dimension goes far beyond mere awe at the sublime, whether it be inspired by nature, beauty, music or human passion – something any sentient atheist can, and will, admit to. Faith admits to both doubt and unknowingness. It is not a provable dimension. But it is one of extraordinary power and potential. Symbolically, it is renewed each Christmas, with reverence and humility. This is the fact we celebrate tomorrow.

Stalin, Hitler, and Mao were first and foremost totalitarians, which the article correctly points out is the greatest danger to society at all levels. They established what amounted to “state religions” complete with scripture, (Mein Kampf, Communist Manifesto, Little Red Book), large portraits of themselves as ‘gods’ and requirements of unquestioned obedience. Totalitarian dictatorships resembled theocracies more than any kind of product of scientific rationalism. Because they relied on unchecked authority they cannot be seen as the result of the cautious skepticism of science.

Atheism can only be defined by what it is not. It simply means “without gods.” Other than that, it is as diverse as humanity itself, having no other defining characteristic. That hardly fits the narrow definition of “ideology.”

Beware of religious attempts to shift the burden of proof. It is those who claim to see the invisible and know the unknowable who are dangerous, and should invite our skepticism and ridicule.

Claiming we must know every minute nuance of religion in order to comment on it is vapid sophistry. Do I have to have watched every derivative TV episode of every Manga ever published to understand that it is a stylized fictional comic story? If a Manga aficionado insisted that the canon of Manga represented the history of the world and an explanation of the origin of life and the universe, do I have to know chapter and verse of every book or episode ever made to declare this to be hogwash? Of course not.

This empty defense of theology is simply a variation on argument from authority: We can’t comment on theology unless we have been evaluated and accepted by theologians to be so qualified on their terms. And they won’t accept anyone as qualified who doesn’t first agree to their presuppositional authority. It’s an impenetrable closed system.

The “spiritual dimension” is clearly the realm of personal experience and subjectivity. Spirit simply means “breath.” To be alive is therefore to be spiritual. Whatever has meaning for us is inherently spiritual. But this will clearly be different from what has meaning for anyone else. So it is the height of arrogance for anyone to tell us how we “should” express our spirituality. Or to claim they have a monopoly on such expression.

It is not faith that admits to doubt or unknowingness, faith deals in false certitudes, belief without evidence or in spite of conflicting evidence. The true unknowingness is the skepticism of science and the willingness to avoid premature conclusions. We do not need a generic self-effacing ‘reverence’ or ‘humility’ this holiday. Those are tired cliches and do not represent true virtues.

We need instead the grounding of realism, which is the development of both healthy ego and healthy consensus. It is also the profound and firm separation of the known from what is unknown–and the further separation of the unknown into what is likely to be discovered and what is likely to remain permanently unknown. It is this permanent unknown which should inspire a humility of self-discipline–not self-deprecation–which should be strong enough to keep us from making and promoting baseless conjectures.

To quote another tired but still relevant cliche, to change the world we must first change ourselves. Being true to our humanity this holiday also means we need to renew our commitment to rational introspection, defeating superstition, and moving forward in our journey toward self-awareness. But all the while we must be ultra-careful not to take a shortcut and succumb to the ever-tempting but empty comforts of self-delusion.

Saudis Preparing For When the Oil Runs Out

[…]It is totalitarian in its prescription for human happiness[…]

When will they stop flogging this dead horse? It is not just dead: it’s flesh was consumed long ago, and its bones turned into dust.

Oh well! I suppose it helps them sleep at night…