John Haught’s Cliche-Ridden Caricature of Atheism
LOGIN
Monday, December 5, 2022
Top Posts
What’s Up With the Nazi “Black Sun” Rune Wheel?
Elizabeth Clare Prophet Claimed To Be ‘Clairvoyant’
The Eightfold Path of Denial of Death
Why I Left The Radical Secular Podcast
Miss R*EVOLutionaries: Panel Discussion
Money Is Not A “Shared Fiction”
Beliefs About God Won’t Make You Moral
This Is Not Fine!
Wealth Concentration Leads to Feudalism
Is Something Unclear About What’s Wrong With America?
SUBSCRIBE
Archive 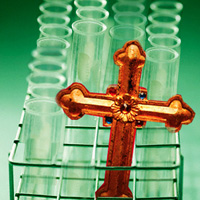 It’s another groaner over at Salon.After their inexplicable dalliance with the confused ramblings of Camille Paglia, it’s hard to pretend anymore that the webzine is relevant, or to justify my subscription fees, which have continued unabated since about 2002. (That may change.) Now, under the jaunty subhead “Atoms & Eden” they just ran an interview with theologian John Haught called The Atheist Delusion, discussing Haught’s forthcoming book, God and the New Atheism. Pandering to the worst cliches and stereotypes, Haught engages in that philosophical high-wire act of trying to keep religion relevant in the face of unrelenting scientific discovery. It’s bad enough to read this stuff in religious publisher press releases. But on a (supposedly) liberal and intellectual site with a following?

To borrow Paglia’s epithet, here’s a sampling of the “rotting corpse” of theology which Haught advocates. In the introduction by Steve Paulson, it only takes until the fourth paragraph for him to regurgitate that mangled hairball of a phrase “faith in science.” (If you don’t like my unpleasant alliterations, I’m just getting started.)

A few of Haught’s falsehoods, distortions and straw men:

Just as suddenly, Haught begins to adapt the language of science and hijack it for his version of theology:

He bogs down in gobbledygook, suggesting that we begin to use interior subjective experiences as a method to map the universe.

Then *gasp* he attacks Intelligent Design by saying it’s essentially not spiritual enough:

What intelligent design tries to do — and the great theologians have always resisted this idea — is to place the divine, the Creator, within the continuum of natural causes. And this amounts to an extreme demotion of the transcendence of God, [emphasis added] by making God just one cause in a series of natural causes.

He equivocates about religion and science once again,

There are thousands of different definitions of religion. But I like to think of three main ways of understanding it. The first way — and I think almost all of us are religious in this sense — is to define religion as concern about something of ultimate importance. This was Tillich’s broad definition: Religion is ultimate concern. Even the atheist who says that science is the only reliable road to truth, and nature is all there is, is setting up something that’s ultimate. It’s like the top stone of a pyramid that conditions everything else in the pyramid. In our own lives, we all have something like a top stone. If it were suddenly removed, it would cause our lives to fall apart.

A psychological projection of Haught’s own fears and inadequacies onto others. Because Haught’s life might fall apart, he assumes everyone else’s would. Whose foundations are really that weak? We can all hope we don’t engage in such folly, for the act of making any point of knowledge into our idol–our god–is the beginning of the end of rationality.

Then Haught misappropriates Einstein’s respect for the mysteries of the eternal unknown.

So we’re all religious in that sense. In a narrower sense, religion is simply a sense of mystery. Einstein, for example, was someone who couldn’t conceive of people — especially scientists — living without a sense of mystery. There are many scientists — sometimes they’re called “religious naturalists” — who are deeply satisfied with the scientific universe that has given us an exhilarating sense of new horizons. That sense can fulfill a person’s life.

Of course Einstein appreciated mysteries–so they could be solved! That’s a scientists’ reason for being. Without mysteries, science has no purpose. Of course mysteries should be approached with humility, but appreciating them for their own sake would be a static, unfulfilling, and ultimately futile pursuit.

In Einstein’s own words:

I am satisfied with the mystery of life’s eternity and with a knowledge, a sense, of the marvelous structure of existence – as well as the humble attempt to understand even a tiny portion of the Reason that manifests itself in nature.

Then Haught gets downright mendacious with his dodging and weaving and tap-dancing around age-old theological contradictions. (I’m surprised there was nothing in there about theodicy)

The more things change, the more they stay the same. Theology cannot survive without attacking science. Theology cannot survive without fabrication, equivocation, and appealing to a fundamentally sentimental anthropomorphization of God and the universe. How it would (the thought is delicious!) terrify Haught if he were to realize that his God exists not only in the form of man, but is also a product of him.

To watch Salon participate in yet another attempt to wheeze life into the expired bones of Haught’s discredited arguments makes me want to gag and hurl great chunks of indignation–the sickening saccharine sweetness and neatness of it all. What, are we two years old??

His book seems nothing if not a desperate lullaby for those too afraid to live with the reality that they are specks in an uncertain and unknowable universe. “Go back to sleep kiddies. You are special and loved. God is in his heaven, and it’s a place of order–a place for everything, and everything in its place.”

What’s worse is some will read this book and try and use it to debunk the Four Horseman, without even reading their books on their own.

This is getting tiring.

â€œGo back to sleep kiddies. You are special and loved. God is in his heaven, and itâ€™s a place of orderâ€“a place for everything, and everything in its place.â€

Ironic that you conclude a piece entitled John Haught’s Cliche-Ridden Charicature of Atheism with one of the most peurile, cliche-ridden charicatures of theology I’ve ever come across.

Ironic that you conclude a piece entitled John Haughtâ€™s Cliche-Ridden Charicature of Atheism with one of the most peurile, cliche-ridden charicatures of theology Iâ€™ve ever come across.

Yes, of course, it is an oversimplification to underscore the point… You say you get the irony, but do you?

I’m saying to the religious, “see how it feels?” I’m not so sure you’re as agnostic as you say you are.

It’s sad that we have to subject ourselves to reading tripe like that from Haught, after a while it can get vary wearing. But it is necessary to ensure that someone like yourself BlackSun can shine some light on the many errors. Unfortunately I fear that too many ‘believers’ will read Haught’s book and think it all makes perfect sense.

I’m interested to read his book – I can’t help but hope that he actually tries to provide evidence in the book – he sure didn’t do that in the interview. here’s my take on it:

[…] In its Atoms and Eden section, Salon has published The Atheist Delusion, in which the theologian John Haught plumbs the depths of his ignorance to explain why science and God are not at odds and why Richard Dawkins and the “new atheists” lead lives bereft of meaning and hope, naively shun a fool’s paradise and fail to appreciate the value of maintaining faith in imaginary deities. This article is laid waste at Black Sun Journal in a post entitled “John Haught’s Cliche-ridden Caricature of Atheism.” The more things change, the more they stay the same. Theology cannot survive without attacking science. Theology cannot survive without fabrication, equivocation, and appealing to a fundamentally sentimental anthropomorphization of God and the universe. How it would (the thought is delicious!) terrify Haught if he were to realize that his God exists not only in the form of man, but is also a product of him. […]

I haven’t read Haught, but based on what you relay, indeed there is not a single original thought or argument in it.

Why are the nutjobs always vacillating between “God is outside of nature” and then trying to suggest there’s “evidence” for God?? Why are they so incapable of logical thought that they can’t even recognize they do this?

I mean, please explain further why consciousness “points to evidence of a divine hand.”

To extend the ironic voice further…does NOT!!

“An atheistic worldview is not capable of justifying truth, goodness, or beauty.”

And this is what Faith brings us: http://www.disillusionedwords.com/?p=30