“Fall from Grace” Documents The Perils Of Religious Bigotry
LOGIN
Monday, December 5, 2022
Top Posts
What’s Up With the Nazi “Black Sun” Rune Wheel?
Elizabeth Clare Prophet Claimed To Be ‘Clairvoyant’
The Eightfold Path of Denial of Death
Why I Left The Radical Secular Podcast
Miss R*EVOLutionaries: Panel Discussion
Money Is Not A “Shared Fiction”
Beliefs About God Won’t Make You Moral
This Is Not Fine!
Wealth Concentration Leads to Feudalism
Is Something Unclear About What’s Wrong With America?
SUBSCRIBE
Archive

“Fall from Grace” Documents The Perils Of Religious Bigotry

Westboro Baptist members are more obnoxious, but most evangelicals have the exact same beliefs 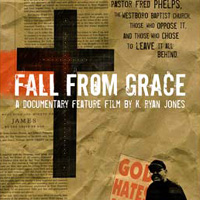 This disturbing documentary from University of Kansas filmmaker K. Ryan Jones reveals the truth about homophobic “minister” Fred Phelps and his twisted Topeka congregation, as they move from gay-bashing to such equally appalling acts as desecrating the funerals of soldiers killed in Iraq. “Wisely maintains an even keel, letting the garrulous subjects hang themselves,” says “Variety.”

A must-watch on Showtime, starting Tuesday, Dec. 4th with multiple showings. Then on demand after Dec. 5th.

A few thoughts after watching Fall from Grace: Jones did an excellent job handling this material. He must have really talked a good game to get such close access to Phelps’ family. Including “on the fly” interviews with many of Phelps’ young grandchildren. Seeing 5-year-olds declare “fags are going to hell” was unsettling, to say the least.

But Jones’ main focus seemed to be differentiating Westboro Baptist from other religion. An exception to this is that he quoted Falwell, Robertson, and others spouting much the same rhetoric as Phelps, albeit less colorfully. Clearly, Jones was not trying to tar all religion with the same brush, but rather to encourage a less literalist interpretation of the bible. Both a pastor and a theologian spoke out eloquently against Phelps’ treatment of the subject of homosexuality, saying it is out of all proportion to how it is actually treated in the bible. They also notably discussed how the homosexuality referred to in the bible is actually pederasty–not the committed same-sex relationships we see today.

A total of 15 credited interview subjects appeared in this film, including the mayor of Topeka, Kansas, and two of Phelps’ estranged children. Both of these adult children were only heard on the telephone. They told a story of daily anger and frequent floggings and beatings at the hand of the senior Phelps, who ruled his family with an iron fist. They claimed he was addicted to anger, and that was his real motivation for attacking gays.

But the most powerful part of the piece was the profile of a 20-something Iraq widow, whose husband’s funeral was picketed by Phelps’ family. A posse of bikers showed up at the funeral to drown out the haters. She was a total innocent caught in the crossfire. Very sad.

All in all the documentary was a great showcase for this unfortunate chapter in U.S. religious history. It’s proof that whackjobs can use the press and pseudo-religion to cynically gain worldwide attention and further their agenda.

Two other interesting notes on this story:

I’ve come down hard against the Phelps family on this issue. I think we can preserve the principle of free-speech without permitting such blatant hatred and incendiary conduct to occur. As far as I’m concerned, Westboro Baptist repeatedly picketing funerals (over 22,000 demonstrations in 15 years) is no different than Nazi skinheads repeatedly picketing synagogues. The ACLU is wrong on this one, it’s not free-speech, it is harassment and should not be tolerated.

I Have No Desire To Participate In Anyone’s ‘Divine Mission’

Getting Rid Of The “Divine” Middleman

Why is this a must watch? A bunch of religious zealots that do not speak for christians nor is there anything in the bible to support their thinking and actions only rebuke.

These type of programs just fuel the fire of misinformation and misrepresentation.

Roger, you need to spend more time actually reading your bible. While you may find the actions of Phelps, et. al, abhorrent, they are actually staying closer to the literal interpretation of the bible than many mainstream denominations (who have watered down their message to appeal to modern sensibilities).

Actually I do and it doesn’t. Phelpsâ€™s views and actions only bring down rebuke and condemnation on himself from God.
I donâ€™t know if people intentionally or unintentionally leave out verses like, Romans 13:1-7 states: “Everyone must submit himself to the governing authoritiesâ€¦â€ (Obey the law of the land) â€œDo unto others as you would have them do unto you”, or let him without sin cast the first stone” instead we pick a verse like
Jesus says,
â€œDo you think that I have come to bring peace to the earth? No, I tell you, but rather division! From now on five in one household will be divided, three against two and two against three; they will be divided: father against son and son against father, mother against daughter and daughter against mother…â€

I can see how people can misinterpret or use that to their advantage, are these harsh words or a warning? You bet ya but by no means does that verse promote violence.

the bible is like the alphabet, you can use it to say whatever you want to say. Sure it has the golden rule, but that predates the bible anyway. You can’t cherry pick just the good parts and ignore the bad.

For a complete summary of biblical violence and cruelty, go to skeptics annotated bible

There are all kinds of other appalling things there as well.

I will admit that there are verses that appear to contradict each other, keyword, “appear” Remember that the Bible was written by approx. 40 different authors over a period of 1500 years.
Each writer wrote from a different perspective, to a different audience, for a different purpose.
Shouldn’t we expect some differences? However, that is not to say a difference is a contradiction or an error. It is only an error if there is absolutely no conceivable manner in which the verses or passages in question can be reconciled. Even if we do not have the answer right now, that does not mean the answer doesnâ€™t exist. Many have found a supposed error in the Bible in relation to history or geography only to find out that the Bible is correct once further archaeological evidence is discovered.

(Sorry previous answer was not meant for this site)

Lot refuses to give up his angels to the perverted mob, offering his two “virgin daughters” instead. He tells the bunch of angel rapers to “do unto them [his daughters] as is good in your eyes.” This is the same man that is called “just” and “righteous” in 2 Peter 2:7-8. 19:7-8

Even the righteous before God can do things that are wrong. Overall, Lott feared God and trusted in Him even though he did wrong by offering his daughters.

Even though you don’t believe doesn’t negate the fact there are good, solid and very reasonable answers out there that support my “watered down” outlook of my understanding of the bible

Roger, I get that comment 6 was not “meant” to be posted, but you did say “Each writer wrote from a different perspective, to a different audience, for a different purpose.

So you say. Others say that the Bible, is the inerrant word of god. As Black Sun says, you can’t Cherry Pick if this is the case. Your god ordered the deaths of whole tribes of people – men, women, children, even animals. He ordered death sentences for some “sins” that most people (who worry about “sins”) would say are much more trivial than someones sexual orientation.

The point of Black Sun remains unrebutted. That a literal interpretation of the Bible (much more intellectually honest, if you are going to be a believer) would leave you to do, not just what the people featured in this movie have done, but things much worse.

[…] In response to a review of Fall from Grace, a film about Fred Phelps hateful Westboro Baptist Church, the â€œno true Scotsmanâ€ fallacy: â€œA bunch of religious zealots that do not speak for christians nor is there anything in the bible to support their thinking and actions only rebuke.â€ Wrong. Phelps and his gang claim to be Christian, and they referred to the actual bible quotes (Romans 1, to be exact) to support their hatred and harassment campaign. […]

I won’t join the debate above, even being a Christian. suffice it to say that Phelps “church” and his msg of hate makes my skin crawl.