Scientist Retracts 52-Year Old Paper Improperly Cited By Creationists
LOGIN
Monday, December 5, 2022
Top Posts
What’s Up With the Nazi “Black Sun” Rune Wheel?
Elizabeth Clare Prophet Claimed To Be ‘Clairvoyant’
The Eightfold Path of Denial of Death
Why I Left The Radical Secular Podcast
Miss R*EVOLutionaries: Panel Discussion
Money Is Not A “Shared Fiction”
Beliefs About God Won’t Make You Moral
This Is Not Fine!
Wealth Concentration Leads to Feudalism
Is Something Unclear About What’s Wrong With America?
SUBSCRIBE
Archive 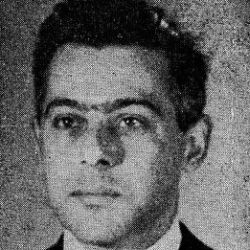 In January 1955, Homer Jacobson, a chemistry professor at Brooklyn College, published a paper called “Information, Reproduction and the Origin of Life” in American Scientist, the journal of Sigma Xi, the scientific honor society.In it, Dr. Jacobson speculated on the chemical qualities of earth in Hadean time, billions of years ago when the planet was beginning to cool down to the point where, as Dr. Jacobson put it, “one could imagine a few hardy compounds could survive.”

Nobody paid much attention to the paper at the time, he said in a telephone interview from his home in Tarrytown, N.Y. But today it is winning Dr. Jacobson acclaim that he does not want — from creationists who cite it as proof that life could not have emerged on earth without divine intervention.

So after 52 years, he has retracted it.

It is not unusual for scientists to publish papers and, if they discover evidence that challenges them, to announce they were wrong. The idea that all scientific knowledge is provisional, able to be challenged and overturned, is one thing that separates matters of science from matters of faith.

So Dr. Jacobson’s retraction is in “the noblest tradition of science” Rosalind Reid, editor of American Scientist, wrote in its November-December issue, which has Dr. Jacobson’s letter. His letter shows, Ms. Reid wrote, “the distinction between a scientist who cannot let error stand, no matter the embarrassment of public correction” and people who “cling to dogma.”

There’s not a clearer example of the stunning moral difference between faith and science than this brave act by a scientist.That it happened in response to the crass manipulations of so-called “scientific creationists” is even better.

If these ID nutbags were actually onto something, they’d be citing current work, and they’d have no trouble attracting top talent. But no. They have to content themselves to trotting out 50-year-old speculations just vague enough not to disprove what they want so desperately to believe. How intellectually weak can you get?? Weak enough that the 84-year-old scientist they cited came out of retirement to tell them they’re full of shit. Now that’s weak.

Thank you, Dr. Jacobson, for exposing these quacks for the cynical frauds that they are.

Home Schooling Christians Lie To Their Kids About Science

Everyone with a modicum of intelligence sees right through intelligent [not!] design creationism to the religious illogic behind it.

No doubt, so long as a religious obsessive is willing to donate to the cause, IDiots will continue to churn out the lies and polemics.

In my innocent youth, before meeting creationists, I assumed that truth mattered to most people. It’s good to see that it matters to retired scientists.

Check this out. It provides a very good illustration of why we insist that ID has nothing to do with science, and it is also appropriate to the news at hand.

What’s the point of this Science’s vs. Religion fight, you know there will always be fanatics desperate to defend their point, fact or no fact. You should know the people clinging to their idea aren’t the most privileged in the society, so maybe it gives them what they need to go on. Sure I look at those people as nut jobs, but I’m not going to rub it in their face. I believe that quitting a religion (sp?) might have to do something with the level of education: the more you get abstract and complex ideas answered, the more you doubt.

Sure I look at those people as nut jobs, but Iâ€™m not going to rub it in their face.

If they were content to worship on their own, keep their beliefs to themselves and stay out of public policy, there would be no need to do this. But as you probably know, they are making serious efforts worldwide (yes there are Muslim creationists, too) to include the religious perspective as part of the scientific curriculum. And well-funded p.r. machines like the Discovery Institute grind away 24/7 attacking the very foundations of knowledge and trying to pollute the education of children.

Then there’s the upcoming film with Ben Stein, Expelled, where he casts the effort at scientific accuracy as some kind of a witch hunt. This rhetoric will most likely get worse before it gets better. So it is up to us rationalists to call them on their bullshit, loudly and publicly, at every opportunity.

So… was there anything wrong with the actual paper? If so, why did he wait so long to retract it, and if not then creationists are just gonna say that “Darwinists” will even cover up their own studies if they support ID…

Here’s what Dr. Jacobson had to say about his own paper:

Things grew worse when he reread his paper, he said, because he discovered errors. One related to what he called a â€œconjectureâ€ about whether amino acids, the basic building blocks of protein and a crucial component of living things, could form naturally.

â€œUnder the circumstances I mention, just a bunch of chemicals sitting together, no,â€ he said. â€œBecause it takes energy to go from the things that make glycine to glycine, glycine being the simplest amino acid.â€

There were potential sources of energy, he said. So to say that nothing much would happen in its absence â€œis totally beside the point.â€ â€œAnd that is a point I did not make,â€ he added.

Another assertion in the paper, about what would have had to occur simultaneously for living matter to arise, is just plain wrong, he said, adding, â€œIt was a dumb mistake, but nobody ever caught me on it.â€

Does that make things a little clearer? If the creationists had bothered to check the paper against current work before citing it, they would have also discovered the errors. But since their agenda is to promote a preferred conclusion rather than look for truth, they had every reason not to want to know the facts.

It’s for articles like this that Stumbleupon needs something better than just an “I like it” button….

Why do we assume that the scientist is the most egalitarian, self-less, perfect individual, that his retraction of an article is only made on purely truth-pursuit-based motives?

Might there not be a possibility, however slight, that he retracted the article due to an unwillingness to confront the possibilities it may present?

Why do we assume that the scientist is the most egalitarian, self-less, perfect individual, that his retraction of an article is only made on purely truth-pursuit-based motives?

We don’t have to make any such assumptions. He’s saying he made a mistake, something scientists admit regularly. If the paper was withdrawn for any other motive, then he would be turning his back on his lifetime of dedication to his discipline.

Further, we don’t have to take his word for it, other scientists can review the paper and see if they agree it was erroneous.

You’re free to make your accusation if you want, but it is ad hominem, and since by raising those doubts you are attacking the man’s character, the burden of proof is squarely on you.

Science as a word is misused almost as often as the dogmas of Religion. As long as those of a scientific mindset are willing to admit that our universe/multiverse is far stranger than anything we currently comprehend as ordinary, I have no problem with science.

It is when Science is used as a word to pad unscientific propaganda that I get upset. Government Administrations that forward agendas of greed and protection of a class of individuals (Wealthy, Religious, Well-Connected) are just as evil as any proponent of ID.

Beware fighting too hard to defend Science without being willing to dismantle the power of dogmatists and hypocrites within the Scientific, Corporate & Modern Pseudo-Aristocracies that shape our destiny.

As long as those of a scientific mindset are willing to admit that our universe/multiverse is far stranger than anything we currently comprehend as ordinary, I have no problem with science.

I think that kind of defines the science position. Why would anyone claim otherwise?

You are describing political structures that have nothing whatsoever to do with the purity of the scientific method.

Of course, none of you are actually going to study some of the work behind ID or do any comparative
work between the theories for YOURSELF because "real science" only takes the viewpoints that
allow the game to keep being played. The "modern scientific method" itself seems to bear the marks
of religion – having a lot of faith in things it cannot prove, no direct observation of events, etc.

You mean the "wedge" document? Come on. Science as religion? Come back when you've learned the meaning of the word "equivocation."

The "nothing can be known" position is most descriptive of its adherents. That computer you're typing on? Science. Next time it breaks, try praying over it.

Its intellectually lazy to assume that science and spirituality are mutually exclusive. Both the mythic believers and the scientific materialists are guilty here, and they each hang onto fragments of truth and ignore everything that doesn't fit with their little view of how they think the Kosmos works. The truth is niether side has come close to capturing the true infinite glory of our ever-present God.