David Borden of DRCNet Is Making A Difference
LOGIN
Sunday, December 4, 2022
Top Posts
What’s Up With the Nazi “Black Sun” Rune Wheel?
Elizabeth Clare Prophet Claimed To Be ‘Clairvoyant’
The Eightfold Path of Denial of Death
Why I Left The Radical Secular Podcast
Miss R*EVOLutionaries: Panel Discussion
Money Is Not A “Shared Fiction”
Beliefs About God Won’t Make You Moral
This Is Not Fine!
Wealth Concentration Leads to Feudalism
Is Something Unclear About What’s Wrong With America?
SUBSCRIBE
Archive

David Borden of DRCNet Is Making A Difference 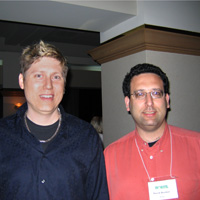 All this tireless activism stems from the idea that prohibition has a terrible cost, both to the individual and society. These arguments have been well made by others, many times over. Some of BSJ’s most viewed articles have been commentary on the folly of the War on Drugs. But politics is never a realm where good arguments win the day. Perception is reality, and sadly for many Americans, it’s just about as simple as was summed up by Mr. Mackey in South Park: “Drugs are bad. M’kay?”

There is also a perception of anti-drug-prohibition activists as aging baby-boomers with greying pony tails stumbling into the hotel lobby trailing clouds of pot smoke. Nothing could be further from the truth. While I did see a few pony tails, the majority of activists were young, clean-cut, and sharply dressed. I was also very surprised to learn that for all his passion on the subject, Borden himself has never tried any drugs, including pot. He once took some prescription (Codeine) pain killers after an injury, but that’s it. He also refused my offer to buy him a drink, instead opting for coffee. His concern about drug policy reform comes from its impact on society, both in the U.S. and in other drug-producing countries, where drug-eradication efforts often devolve into a mess of thuggery and corruption.

I asked Borden if he ever planned to try the drug he spends his life defending. He has an amazing stoicism about the subject. He joked that he wanted to enjoy a celebratory puff the night before full legalization. I kidded him that he was like Henry VIII who refused to consummate his relationship with Anne Boleyn until he could have his legal divorce.

Borden, who is also an agnostic, started his activism in 1992-93 with a small email list. Aside from individual donations, DRCNet receives indirect support from a George Soros umbrella foundation. He also receives grants from Dr. Bronner’s Magic Soaps, now run by Mike and David Bronner, grandsons of Emmanuel Bronner. Their saga was the subject of the recent documentary Dr. Bronner’s Magic Soapbox. The Bronners recently changed the formulation of their venerable soap product line to use hemp oil instead of jojoba. Aided by the Vote Hemp organization, which has rallied support to change laws on commercial hemp production, and the use of hemp oil in foods, hemp oil is now used in virtually all organic soaps. Which has led to some bizarre consequences, such as legendary punk rock drummer Don Bolles of the Germs, who was arrested after a bottle of Dr. Bronner’s soap he had in his car tested positive for GHB! Charges were later dropped, but he spent several days in jail. This shit really does happen.

Peter Lewis, president of Progressive Insurance, also supports drug policy reform and DRCNet. Here’s a conservative article from the so-called “accuracy in media” site, slamming him for a 2000 incident where he was caught in New Zealand with a couple of ounces of pot and hashish. After making a sizeable contribution to local drug-treatment programs, he was released.

…on a trip to New Zealand three years he was arrested and admitted to three charges of importing drugs after customs officers found two ounces of hashish and 1.7 ounces of marijuana in his luggage. Of course, Lewis said he was carrying the drugs for “medicinal purposes.” The Washington Times reported that the incident “sparked a political furor after the charges were dropped and his identity was suppressed by a court in New Zealand.” New Zealand Judge David Harvey dropped the charges and invited Lewis to watch the challenger rounds for the America’s Cup yacht race while in New Zealand and to “enjoy the fresh air.

According to Borden, future strategy for drug policy reform will encompass drug-related HIV cases and a push for needle exchanges. We also discussed the issue of drug testing in the workplace, another severe and worsening invasion of citizen privacy.

What’s funny to me is that while prohibition is really an issue about individual liberties, the political strategy has to be quite different. Because American Puritanism doesn’t grant moral authority to our personal desires. To get through to this hardcore anti-pleasure mindset, drug use has to be framed as a question of compassion and need. Hence the (successful in 12 states so far) political emphasis on medical marijuana and needle exchanges. Most people will sanction medicinal drug use while at the same time condemning recreational consumption. If a person needs something, it’s OK. But to holders of these 17th century attitudes, wants are things to be controlled and repressed. The argument parallels the religious condemnation of gays. If it’s a choice, then it can be condemned. Which is why conservative religions refuse to accept all scientific evidence for genetic predispositions to homosexuality. But I digress. My point is that any perception of drug use for “hedonistic” purposes is guaranteed to be shot down by an American public which seems to chiefly be concerned that we all remain equally miserable.

I’d love it if we could simply acknowledge that drugs can be used constructively for fun as well as introspection. And that we should be encouraging education and healthy moderation of drug use. After all, our society consumes massive and growing quantities of prescription drugs, starting with the force-feeding of anti-ADHD meds (which are basically speed) to young children.

Ending drug prohibition is really about society growing up, and putting the responsibility for choices and mistakes back on the individual. We should learn more about drugs and their real effects, (not Reefer Madness propaganda). And we should stop pretending that when we use prescription drugs, it is somehow categorically different than street drugs, and therefore less dangerous. We should stop pretending that alcohol and cigarettes are privileged over other drugs for any other reason than they have a constituency and tax base. We should stop pretending that the $60 billion prison industry is anything other than a blood-sucking leech on the American taxpayer–not to mention a racist and monolithic beast that diverts funds from education, incarcerates millions of non-violent offenders, and destroys millions of lives.

Drug reform activists are heroes, and I’m extremely happy to have met a few of them. I encourage all readers to get active and oppose drug-prohibition with as much passion as you can muster.

Can We Get Past Climate Denial, And Solve This?

Great article. I love the part about Borden refusing a drink and your analogy about Henry VIII. Maybe we can awaken gonzo journalism for our era.

Nice article, Sean. It’s nice to hear that many at the NORML conference were well-dressed, etc. The reflexive hippy/stoner/slacker labels used by the enemy can be fought by surrendering to such trivial things like wearing a suit and tie, etc.

My philosophy is simple: For each law in our society, one must ask, “If this law were to be successfully enforced 100% of the time, would that be good for society or bad?” Murder: bad. But drugs? Drugs are good, M’kay? (end result of applying my test.)

GBJ, I agree, kind of the secular version of “What would Jesus do?”

And we should stop pretending that when we use prescription drugs, it is somehow categorically different than street drugs, and therefore less dangerous.

I don’t think that this is a good example. These drugs are asigned to their users by people who are very well aware of their effects, and can effectively decide when they should be used and when they should not for the best effect (at least, ideally). Over the counter medication is a better example of the hypocricy I think you are trying to illustrate.

I once watched an interview with a person who took Extasy, and claimed that one should only use that drug within the frame work of a support group of people who take it too and know well its effects. Kind of like taking prescription Extasy. He said that taking it while assuming that once the high is over your life will be no different was false and potentially dangerous. It made sense.

These drugs are asigned to their users by people who are very well aware of their effects, and can effectively decide when they should be used and when they should not for the best effect (at least, ideally).

Valhar, you have a point. What I was trying to say is that they can just as easily be abused, as the millions of prescription drug addicts can tell you. They also get resold on the street.

Addiction is addiction, and the companies producing the pills, though they have a legitimate purpose, still feed into the problem. And though I don’t accept conspiracy theories, clearly pot legalization is not in the interests of Big Pharma.