I Love Kathy Griffin
LOGIN
Sunday, November 27, 2022
Top Posts
What’s Up With the Nazi “Black Sun” Rune Wheel?
The Eightfold Path of Denial of Death
Elizabeth Clare Prophet Claimed To Be ‘Clairvoyant’
Why I Left The Radical Secular Podcast
Miss R*EVOLutionaries: Panel Discussion
Money Is Not A “Shared Fiction”
Beliefs About God Won’t Make You Moral
This Is Not Fine!
Wealth Concentration Leads to Feudalism
Is Something Unclear About What’s Wrong With America?
SUBSCRIBE
Archive

No one takes the piss out of sanctimony like she does 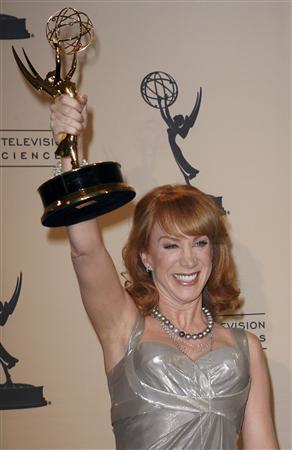 I‘m a little late to the lovefest, I know.But thank god with a small “g” that someone was willing to get up at the Emmys and not thank Jesus. In so doing, she burst the bubble of all those sanctimonious pricks at award shows who act as if they’re doing anything but shameless pandering and groveling. She made them into the joke that they are when they give credit to anyone else but themselves and the people who helped build their careers.

In her speech, Griffin said that “a lot of people come up here and thank Jesus for this award. I want you to know that no one had less to do with this award than Jesus.”

She went on to hold up her Emmy, make an off-color remark about Christ and proclaim, “This award is my god now!” [according to Pharyngula, the off color remark was “Suck it, Jesus!”]

The comedian’s remarks were condemned Monday by Catholic League President Bill Donohue, who called them a “vulgar, in-your-face brand of hate speech.”

According to the TV academy and E!, when the four hour-plus ceremony is edited into a two-hour program, Griffin’s remarks will be shown in “an abbreviated version” in which some language may be bleeped.

From the Hollywood Reporter:

Griffin drew laughs in her acceptance speech, saying: “Can you believe this shit? Hell has frozen over. Suck it, Jesus, this award is my god now.”

Shame on the Academy of Television Arts and Sciences for not standing up to the likes of Bill Donohue and his sidekick one-man-complaint-mill Brent Bozell. By acting as if the Catholic League or the Parents Television Council have any moral authority, they cede it to them. And best of all, they ensure that Griffins remarks will be eventually seen and heard by far more people than if they had not been so censored.

So, all you Jesus-thankers, get over yourselves. You’ve just been lampooned. Get it? That’s the purpose of humor, to deflate the self-important and dethrone the hypocrites. You could get upset, or better yet, just learn how to accept an award in the spirit its given–for your own achievement. As far as I can tell, that’s all Griffin was trying to say.

The Rank Absurdity of the ‘Law of Karma’

Atheists Are Constantly Being Asked To Prove God Doesn’t Exist