The Shadow Of America’s Decaying Infrastructure
LOGIN
Monday, December 5, 2022
Top Posts
What’s Up With the Nazi “Black Sun” Rune Wheel?
Elizabeth Clare Prophet Claimed To Be ‘Clairvoyant’
The Eightfold Path of Denial of Death
Why I Left The Radical Secular Podcast
Miss R*EVOLutionaries: Panel Discussion
Money Is Not A “Shared Fiction”
Beliefs About God Won’t Make You Moral
This Is Not Fine!
Wealth Concentration Leads to Feudalism
Is Something Unclear About What’s Wrong With America?
SUBSCRIBE
Archive

The Shadow Of America’s Decaying Infrastructure

We've been starved of public goods since the Reagan tax cuts 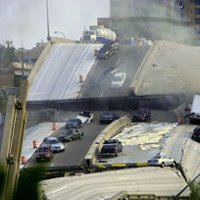 Hindsight is 20-20. After the dust clears–but often before the bodies are buried–the failure analysis teams swoop in and figure out what happened. We determine who gets fired and who gets the lawsuit bonanza. But the aftermath of such man-made tragedies exposes a deeper issue: we neglect what we don’t see. We take for granted all those things we rely on every day. If it ain’t broke…

Shadow is a catch-all term for things hidden, unexpressed, unexplored. It’s also a great word to describe how modern America deals with its infrastructure. In the annual budget clusterfuck, where money is doled out based on who screams loudest (i.e. who has the most lobbyists for pork-barrel and high-profile projects), infrastructure is treated like the poor step-child. No one gets elected on a platform of “making repairs.” This shadow also traces directly back to the chronic underfunding of public goods that began with the Reagan tax cuts, and continued with the long term Republican party obsession with spending cuts.

The I-35W bridge had repeatedly been identified as suffering from “fatigue cracks.” Inspectors had labeled it “structurally deficient.”

Yet, as Minneapolis Star-Tribune columnist Nick Coleman noted on the morning after the collapse, “The death bridge was ‘structurally deficient,’ we now learn, and had a rating of just 50 percent, the threshold for replacement. But no one appears to have erred on the side of public safety. The errors were all the other way.”

That’s not a unique circumstance. That is the daily reality of America’s rapidly aging and decaying infrastructure. Just a few weeks ago in New York City, an underground pipe exploded, killing one person and injuring dozens

Natural disasters do occur. Storms, heat, aging steel and concrete can all contribute to horrific turns of events like the Minneapolis bridge collapse, the pipe explosion in New York, or the nightmare that occurred in the aftermath of Hurricane Katrina hitting the Gulf Coast.

But there is simply no question that the steady neglect of the crying need for repair and improvement of bridges, levies and other vital pieces of the nation’s infrastructure, and the resolute stinginess of a federal government that is much better at finding money to repair the Middle East than the middle west, makes disasters more likely to occur and more extreme in their consequences.

This is so painfully obvious it shouldn’t even have to be said. But these things keep happening, so apparently it does. Kind of like when you have to choose between fixing the roof and getting that new flat-screen you’ve had your eye on. But if the roof leaks or caves, who cares about the new TV or anything else in the house?

Where is the accountability of government? How do we develop systems to prevent the quiet shame of our neglect from becoming a killer? Are we doomed as a people to just give up and say “these things happen”?

When the Boston “big dig” tunnel roof collapsed a year ago–tragically killing a woman in front of her newlywed husband who survived, I was left wondering the same thing. How do such blatant errors get past the people in charge? I did a little investigating and found out the following:

The ceiling that collapsed was actually a “dropped ceiling” and did not need to be made of 3-ton precast concrete panels. Lightweight sheet metal or grating could have been used. Or they could have just left it open. The framework holding the heavy panels was held in place by (wait for it) epoxy, not structural steel. And the wrong type of epoxy ended up being used! In addition to using the wrong glue, the joints where the threaded rods holding up the whole mess were anchored into the main tunnel structure had up to 40% voids, due to shoddy workmanship.

Common sense says you don’t glue 3-ton panels to the roof and expect them to hold, yet that’s exactly what some poor excuse for an engineer did. We have to wonder how that decision passed muster. It seems someone must have been paid off. We don’t know what sordid tale of payoffs, stupidity, and neglect will yet be told about Minnesota’s I-35W bridge. But we can guess. Real engineers all over the nation are even now shaking their heads in resignation and grief. Maybe now the politicians will pay attention.

But if we all stopped our headlong rush long enough to think about it, we know exactly what needs to be done to fix our infrastructure. We know exactly how to build bridges and tunnels, we’ve been doing it successfully for hundreds of years. We know they require solid design, continuous inspection, and upkeep. It’s not rocket science. The question is, will we decide to value objective engineering truth? Will we insist on new levels of accountability? Will our leadership get their priorities straight before more people die?

A New Earth: Eckhart Tolle In My Mail

In the same way we have been warned by environmentalists for quite some time now that we need to slow down and stop the destruction of our only home we have. How many more ‘Katrinas’ will it take to show that our Earth now too needs not only an easing of exploitation, but a serious effort at maintenance?Can we ever replace the rainforests we have destroyed? Can we unmelt our disappearing icy areas? I think the reason Al Gore lost the election was because of his firm stand in this regard.You also don’t win elections giving people bad news, no matter how necessary.

This bridge was operating at 50% and looks like an earthquake or terror stricken area. Ignorance, Ignorance, ignorance!!! Better to ignore then spend the money to fix it. After all there’s a 50% chance it may collapse and a 50% chance it may not. It won’t hurt to lose a few more pesky citizens,anyway their starting to rise up and are no longer listening to us.

Very true. And Americans need to hear more of it right now:

-Gas taxes need to rise for infrastructure (and to support renewables).

-Arrangements for nuclear waste disposal must be made before we build any more plants.

Word buy locals is it [big dig] was an atm for the polititians. Ma has this glorius reputation [the movie glory] but there is this dark side no one sees , The railroading of the amiralts the school of ugenics where people were taken out of society because they weren’t fit to procreate Mit experimenting on children, Your special you get a treat today your milk is radioactive so we can see what it does. The Boston FBI working with the mob to frame and murder innocent people, [ When asked by congress there respnse was I quote “what do you want tears ” Cover up of priests molesting children. I could go on and on It seems The Kenedy’s are the perfect example looks great on the outside but don’t look to close You know what Reagon said when they asked him if he’d ever been to a communist country He said yes Massachussets. O yah did I mention the original price tag of the big did was two point nine bil

Great article. This reminds me of the F-22 Fighter Jet. Law makers love to fund sexy new war toys like fighter jets…even if we don’t need them. We’re spending billions on the F-22 program and it really has little foreseeable use. Meanwhile, the less exciting, much less expensive but ultimately more valuable mine-resistant V-shaped troop carriers haven’t made it to Iraq in nearly enough numbers. Yet they have proven to save lives. Finally, how do you fight terrorism with an F-22? In Afghanistan, two of our most successful weapons are ancient: the B-52 and AC-130 Gunship.