Peacemakers in Action: Profiles of Religion in Conflict Resolution
LOGIN
Sunday, December 4, 2022
Top Posts
What’s Up With the Nazi “Black Sun” Rune Wheel?
Elizabeth Clare Prophet Claimed To Be ‘Clairvoyant’
The Eightfold Path of Denial of Death
Why I Left The Radical Secular Podcast
Miss R*EVOLutionaries: Panel Discussion
Money Is Not A “Shared Fiction”
Beliefs About God Won’t Make You Moral
This Is Not Fine!
Wealth Concentration Leads to Feudalism
Is Something Unclear About What’s Wrong With America?
SUBSCRIBE
Archive

Peacemakers in Action: Profiles of Religion in Conflict Resolution

It's time to take a closer look at these claims 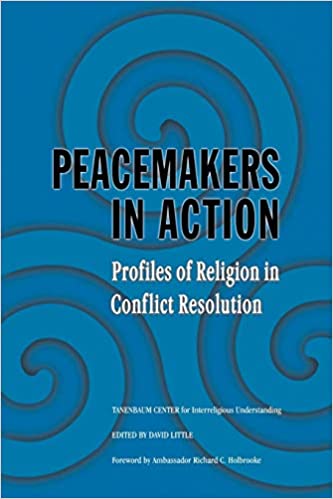 Since roughly 83% of the world’s population claims some form of religious adherence, the fact that many of those 5 billion or so adherents do good for their fellow humans should not be news. Yet this comes up increasingly as a popular defense against the continuing onslaught of atheist polemicists. This recent article in the Vancouver Sun entitled “Religious People Do Good in the World” discusses the above book, published in January 2007, which documents religious good deeds.

The book is Peacemakers in Action: Profiles of Religion in Conflict Resolution (Cambridge University Press), edited by David Little, a specialist in religion and international conflict at Harvard Divinity School. The book tells the impressive tales of 16 courageous women and men who have been inspired by their spiritual convictions to ease tensions and accomplish good in places as diverse as the Middle East, Colombia and Kosovo. Those profiled have employed pulpits, religious texts, rituals, interfaith debate and the power of community to reduce bigotry and bring together battling factions.

The article summarizes the stories of how many of these people risk their lives to reduce tensions and end conflicts. This is an admirable goal, and should be lauded. But we need to take a closer look at how this is being accomplished:

The book profiles Northern Irish priest Roy Magee, a trusted adviser to the Protestant paramilitary, who talked with the militants about the legacy they wanted to leave their children, pointing to religious texts to remind them, “You may escape the court of the land, but you will not escape the judgment of God.”

So let’s examine what this means: Magee supported and reinforced the militants’ greater fear of an invisible god to get them to stop committing acts of violence. But doesn’t this just prolong the problem? I mean weren’t they fighting over varying interpretations of god in the first place? Think about the message: you will not escape the judgment of God. How does this appeal-to-even-greater-fear break the ultimate cycle of violence? They may stop fighting each other, but later when a much different concept of a god comes into the picture from a different sect, they may feel sufficiently justified so that their fear is once again overcome by self-righteousness. Worse, the underlying assumption remains unchallenged: that promotion of the enduring and pernicious falsehood of divine retribution is justified based on a temporary peaceful result. Since religion is at the core of the original conflict, using the same fears to make peace is like trying to put out the proverbial fire with gasoline.

In Nigeria, Muslim Imam Muhammed Ashafa and Christian Pastor James Wuye were bitter enemies until, in response to vicious bloodshed between members of the two faiths, they organized an inter-religious debate, and realized their religions shared strong values about peace and forgiveness.

Peace and forgiveness are humanistic values. Why the need for prolonging and bolstering their justification from ‘on high’? Why not just say, “we only have a short time on this earth, and we should value every moment, so let’s stop fighting and figure out a way to resolve our differences.”? This is the lingua franca of all diplomacy.

Supported by New York’s Tannenbaum Center for Interreligious Understanding, the book also details how Salvadoran Catholic priest Chencho Alas used his Sunday sermons to mobilize national non-violent support for the cause of peasant rights. Peacemakers in Action argues that such powerful religious mediators have the credibility and skill to defuse global conflict, but are under-used, particularly by government officials and diplomats.

Governments are supposed to be secular. At least in the western representative/parliamentary democracy model. Separation of church and state, remember? So they should not be reinforcing the political power of religious leaders. I don’t dispute the idea that religious leaders have a large captive audience, and if they say the right things, they can have a great deal of positive influence. But it comes with a price: they may turn around and say the wrong things tomorrow, because they are not subject to humanist ethics or the rule of law. They claim to be governed by their internal law of scripture, but they leave themselves the truck-sized loophole of “interpretation.” So diplomatically, any religion-brokered settlement has the risk of coming unraveled if or when the religious interpretation changes.

“Religious people have a potential for self-righteousness that links to the idea, ‘We’re doing something not only in our name, but in the name of someone greater than us.’ Through history, many American people have had this idea — of being God’s Chosen People.” To counter the argument that religion only causes strife, however, Stebner’s group has brought in Jewish, Buddhist, Christian, Hindu, aboriginal and other “spiritual” activists with a $100,000-plus budget provided by a host of donors –including the Sisters of St. Anne, the Catholic order of Notre Dame, VanCity Credit Union, the United Church of Canada and Canadian Senator Nancy Ruth.

Of course religions mostly promote ecumenism. It provides a wonderful cover of ‘tolerance’ as long as nobody seriously questions anyone else’s assumptions. So they’re creating a budget of donated funds to make themselves all feel even better about their unquestioning acceptance of belief in belief. Whoop-de-do. They should send the same $100,000 to vaccinate 300,000 children against preventable diseases or build a water treatment plant for a struggling village if they really wanted to make a difference.

All the leaders highlighted on the Interfaith Summer Institute’s website, of course, challenge the image held up by Hitchens, Dawkins and company of religious people as uniformly reactionary and narrow-minded, capable only of spawning division.

I’d accept their conceit about tolerance a little more easily if they had some marquee atheists or secular philosophers on their panel, and were opening up to discussing their basic ontological positions. Otherwise by only empaneling believers, they are proving Hitchens et al to be correct.

Just as many otherwise smart, but over-zealous, religious people don’t want to admit to the good that atheists are doing in the world, clever anti-religious pundits can seem blind in their finger-pointing. They could try loosening up, recognizing there is a host of gutsy people out there making a positive difference in the name of the transcendent.

Does doing something “in the name of” something else change its essence? What does “transcendent” mean? I challenge anyone who promotes this “in the name of” concept to define what they mean when they say “transcendent,” and be specific. I take the term in this context to mean “making things better than they were before.” The dictionary says (if you ignore the supernaturally-based definitions 2 and 3) “exceeding usual limits,” or “universally applicable or significant.” To me, that means something that works really well right here, and right now. In other words, do something because it’s worthwhile in human terms. In this article at least, the premise is to defend god-belief “in the name of” human results. Why not just defend the results themselves instead of “in the name of” something invisible and unknowable?

Margaret Somerville’s “Other Ways of Knowing”