The Kingdom of Reason
LOGIN
Sunday, December 4, 2022
Top Posts
What’s Up With the Nazi “Black Sun” Rune Wheel?
Elizabeth Clare Prophet Claimed To Be ‘Clairvoyant’
The Eightfold Path of Denial of Death
Why I Left The Radical Secular Podcast
Miss R*EVOLutionaries: Panel Discussion
Money Is Not A “Shared Fiction”
Beliefs About God Won’t Make You Moral
This Is Not Fine!
Wealth Concentration Leads to Feudalism
Is Something Unclear About What’s Wrong With America?
SUBSCRIBE
Archive

The Kingdom of Reason 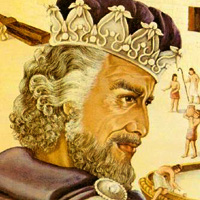 Once upon a time, there was a kingdom of reason.Everyone who lived there understood the principles of logic and only based their conclusions on the evidence before them. The happy kingdom was ruled by a benevolent king, whose edicts were so reasonable no one ever questioned him. On the extremely rare occasion when the king’s advisors found a flaw in his logic, the king immediately obliged them by correcting his mistake.

One day the king was out for a ride in the countryside with his royal guard. He spotted a strange looking man sitting under a tree. He stopped the entire contingent so as to speak to the man. “Good day, sir!” he said. But the man just stared. “Good day,” said the king again, louder. The man began to answer with laughter and nonsense words. He pointed to the sky and his eyes followed unseen objects in the air. It was as if he was living in another world.

Having been at first angry at the man’s disrespect, now the king was amused. And curious. He went back to the castle and summoned the most learned men and women in the kingdom. “I have met a man who seems not to know reason,” he said. “What can be done?” The scholars were perplexed. “I shall offer a reward,” said the king “to the first person in the kingdom who can bring this madman to his senses.”

Straightaway a crowd of the wisest professors and natural philosophers in the kingdom gathered near the man, each trying to outdo the other. Courtiers, odds-layers, and jugglers all watched the proceedings with interest, while fortune-seekers placed their bets, and purveyors of food and drink did a brisk business.

But the madman ignored the professors, staring at the sky, eyes darting from one empty space to another. He continued to repeat the same curious syllables over and over. Sometimes he bowed down and kissed the ground. Other times he sat for hours with his eyes closed with an expressionless smile. Day after day, the wise men and women continued. They finally got the attention of the man, who seemed to be annoyed at their presence. Sometimes he began to talk sense for a spell, making them believe he was learning something. But to their utter chagrin they realized he had gained no understanding but was simply repeating back to them what they had just said. Some thought the madman was engaging in a ruse, but if so, they reasoned, it was indeed a perfect one. For the first time ever, the smartest professors in the kingdom of reason were stumped.

The harder the scholars tried, the more the man became fixated on the sky. He pulled his cloak up over his head to try to shut them out. The bettors who had wagered on their quick success lost all. Gradually people drifted away realizing the futility of the situation. But still the professors pressed on, spurred by visions of the king’s substantial reward.

Gradually they became more and more exhausted, and the madman continued to respond with the same syllables and strange behaviors he did on the first day they had arrived. By this time, news of the king’s edict had travelled to the far reaches of the kingdom, and stories began to return about other such delirious men and women. One by one, the instructors began to understand that for all their knowledge they had failed to grasp one of the most basic truths: there are some people who are incapable of being taught, whether through purpose, guile, or deficiency. Such people were immune to all entreaties of reason. Such people preferred to inhabit another unseen world, though their bodies subsisted in this one. The scholars eventually realized they had not been so wise after all to waste their words and their efforts, no matter how great the reward offered by the king. So they simply walked away in frustration, shaking their heads, leaving the madman alone with his delusions.

Now the king, because he was a good king, was sorry he had caused his best subjects to waste so much time and divert themselves so long from their studies. So he set out payment from the royal treasury and held a feast in their honor. “Do not be sad, for you have made a valiant effort,” he told them. “As for the poor lunatic, I only regret he must live out his days in this kingdom–for he would be far happier in the land of his waking dreams.”

The world was not, and would never be enough for the poor strange one. Wonderful story.