Film Review: The Devil’s Advocate
LOGIN
Sunday, November 27, 2022
Top Posts
What’s Up With the Nazi “Black Sun” Rune Wheel?
The Eightfold Path of Denial of Death
Elizabeth Clare Prophet Claimed To Be ‘Clairvoyant’
Why I Left The Radical Secular Podcast
Miss R*EVOLutionaries: Panel Discussion
Money Is Not A “Shared Fiction”
Beliefs About God Won’t Make You Moral
This Is Not Fine!
Wealth Concentration Leads to Feudalism
Is Something Unclear About What’s Wrong With America?
SUBSCRIBE
Archive

Religious satire doesn't get any better than this 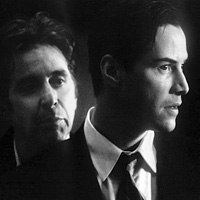 It’s coming up on the 10th anniversary of the release of one of my favorite films of all time. I was reminded of this by a post at Rational Thought called Praise Pacino. It seems the Rational Thought folks are now worshipping Al Pacino for the same reason some other people worship the Flying Spaghetti Monster. A shout-out is in order to Bobby Henderson: you did far more to take apart religious pretentions through your satire than most of us will ever do through reason. And kudos to you, Bobby, for getting Richard Dawkins to refer to FSM in nearly every interview. You’ve started a rampant meme, good on you! After all as Thomas More said, the DevilGod that prowde spirit, cannot endure to be mocked.” You demonstrated that in spades.

Now, on to my mini-review and small tribute to The Devil’s Advocate. There were two memorable things about this film. The first is the incredibly snappy writing, (well, O.K., borrowing from C.S. Lewis, Milton, and other sources), which managed to get one of the world’s leading actors reciting some of the crispest criticisms of god and religion I’ve ever seen in mainstream film. Here are a couple of examples:

Let me give you a little inside information about God. God likes to watch. He’s a prankster. Think about it. He gives man instincts. He gives you this extraordinary gift, and then what does he do: I swear, for his own amusement, his own private, cosmic gag reel, he sets the rules in opposition. It’s the goof of all time. Look…but don’t touch. Touch…but don’t taste. Taste…don’t swallow. (Laughs) And while you’re jumpin’ from one foot to the next, what is he doing? He’s laughin’ His sick, fuckin’ ass off! He’s a tight-ass! He’s a Sadist! He’s an absentee landlord! Worship that? NEVER!

Lomax: “Better to reign in Hell than serve in Heaven”, is that it?
Milton: Why not? I’m here on the ground with my nose in it since the whole thing began. I’ve nurtured every sensation man’s been inspired to have. I cared about what he wanted and I never judged him. Why? Because I never rejected him. In spite of all his imperfections, I’m a fan of man! I’m a humanist. Maybe the last humanist.

(That last sentence? Meh…a little backhand slam on humanism, table scraps for the religious viewers. But hey, they’re watching a different movie anyway. To see just what I mean, go to this howlingly funny Christian review of the film.)

Then Milton takes on hubris:

You sharpen the human appetite to the point where it can split atoms with its desire; you build egos the size of cathedrals; fiber-optically connect the world to every eager impulse; grease even the dullest dreams with these dollar-green, gold-plated fantasies, until every human becomes an aspiring emperor, becomes his own God… and where can you go from there?

And the plunder of the planet:

And as we’re straddling from one deal to the next, who’s got his eye on the planet, as the air thickens, the water sours, and even the bees’ honey takes on the metallic taste of radioactivity? And it just keeps coming, faster and faster. There’s no chance to think, to prepare; it’s buy futures, sell futures, when there is no future. We got a runaway train, boy. We got a billion…[people]…all jogging into the future. Every one of them is getting ready to fist fuck God’s ex-planet, lick their fingers clean, as they reach out toward their pristine, cybernetic keyboards to tote up their fucking billable hours. And then it hits home. You got to pay your own way… It’s a little late in the game to buy out now. Your belly’s too full, your dick is too sore, your eyes are bloodshot and you’re screaming for someone to help. But guess what, there’s no one there! You’re all alone… ’cause you’re God’s special little creature. Maybe it’s true. Maybe God threw the dice once too often. Maybe He let us all down.

The second memorable part of the film was the set design. Milton’s penthouse (both home and office) has to be one of the coolest sets of all time. While making an homage to Dr. No and other “lair” type sets, this one was just, well, cleaner, darker and cooler. Especially when it contained a sensuous life-sized 3D animated version of Frederick Hart’s ‘creation’ sculpture, Ex-Nihilo:

The folks at the National Cathedral were not amused, however, and DVD and TV versions of the film were forced to remove all wide-shots of the moving sculpture.

While thinly disguised as a morality tale, especially the ending, the film plays like a romp. You’re rooting for Milton/Pacino from the moment he makes his first appearance. Even though he acts like a devil and takes advantage of everyone in his path, all of Milton’s victims had it coming, either through their own weakness, naivete, or shadow (repressed desires). This includes Lomax/Reeves and his bitter bible-thumping mother. And by extension, all of humanity. Which sets us up for the very special twist ending.

The astute viewer will read between the lines the message that we all create our own devil archetypes through how we deal with our ambitions and responses to circumstances and opportunities. And often there is no right or wrong answer, just different choices having different consequences for which we are, of course, still responsible.

The Devil’s Advocate, definitely in my top 5. If you haven’t seen it, rent this film, you won’t be disappointed.

The Kingdom of Reason

Peacemakers in Action: Profiles of Religion in Conflict Resolution

Agreed, great film. It contains the best usage of the phrase “forty ways from Sunday” of all time.

From the nutty fundy review:

I would ardently urge anyone under 21 or anyone who struggles with sexual sin to shun this movie.

Yes, thanks for the reminder about this. I

t was a great film and you’ve captured the essence of it really well. Good post.

The movie is so morally complex and entertaining at the same time. Al Pacino’s over-the-top style is so perfect for the character. Keanu Reeves is also good for the selfish chancer. And I loved the ending.

Great commentary on an excellent movie.

The astute viewer will read between the lines the message that we all create our own devil archetypes through how we deal with our ambitions and responses to circumstances and opportunities. And often there is no right or wrong answer, just different choices having different consequences for which we are, of course, still responsible.

However there is a right and wrong. What can you live with and what you canâ€™t live with. Which we rationalize as good and evil. Ambition and Subserviance are the same coin as well.

However there is a right and wrong.

Yes, of course. I was referring to the fact of the twist ending (which I won’t give away), where the character tries to go back and do the “right” thing and is immediately trapped by other aspects of his ambitions.

I saw it once right after it came out on video and remember really enjoying it. I’ll have to put it in queue (although I have about 40 films sitting there right now).