Automakers Still Want You To Buy More Gas
LOGIN
Sunday, December 4, 2022
Top Posts
What’s Up With the Nazi “Black Sun” Rune Wheel?
Elizabeth Clare Prophet Claimed To Be ‘Clairvoyant’
The Eightfold Path of Denial of Death
Why I Left The Radical Secular Podcast
Miss R*EVOLutionaries: Panel Discussion
Money Is Not A “Shared Fiction”
Beliefs About God Won’t Make You Moral
This Is Not Fine!
Wealth Concentration Leads to Feudalism
Is Something Unclear About What’s Wrong With America?
SUBSCRIBE
Archive 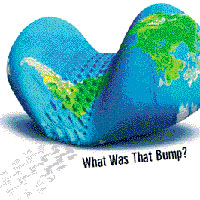 Beginning this Memorial Day weekend, members of the auto industry are rolling out a comprehensive campaign to convince Americans to oppose proposed increases in the Corporate Average Fuel Economy (CAFE) standards, and to pressure their elected officials to vote down such proposals.

The Detroit News reports that the campaign will also include at least a million dollars of radio ads in ten states that have a high percentage of truck and SUV owners.

The AAM’s efforts are bolstered by parallel campaigns from DaimlerChrysler and General Motors, each of which has brought a dedicated website online to help with the campaign.

According to GM’s website (drivingamericasfuture.com), CAFE standards “deter innovation”; “have no near term effect on oil consumption”; “foster competitive disparities that discriminate against US automakers”; and are “a 1970’s solution to a 21st Century problem.”

The website cites the steady rise in US oil consumption as an indicator that CAFE standards have failed, but does not calculate the level of consumption that might exist if such standards had not been enacted.

This kind of cynical public manipulation defies all reason. With growing public awareness of the need for conservation and change, and sharply higher fuel prices, the automakers clearly see a threat to their worn-out business model of pushing expensive and gas-guzzling trucks. I urge everyone to contact their congressperson and senator and support immediate passage of the higher CAFE standards. Following are my comments over at GCC:

This is practically suicidal. Not just environmentally, but in terms of American industrial competitiveness. Not to worry, oil prices will soon provide the education (by 2×4 over the head) the spoiled American SUV driver and the truck-pushing automakers desperately need. And if oil prices don’t do it, the coming carbon tax regime certainly will. [Rep. Pete Stark, the first openly atheist congressman, has proposed an escalating carbon tax starting at $10/ton.]

The worst part of this type of shameless corporate propaganda is that it frames the issue as a zero-sum tradeoff of comfort and functionality vs. efficiency. The truth is that efficient cars are actually better, more functional and more convenient. And dealing with the efficiency challenges would position the automakers as global technology leaders and protect them against their gargantuan liability exposure in the coming post-carbon world. The shareholders should revolt against this arm-dragging stupidity before they lose it all.

A commenter named “Mike” quickly took up the challenge and began bragging about his subsidized gasoline usage. “I got mine!”:

As far as fuel prices go, my vehicle is greater than 50% business use, so I write off my fuel costs every year. Fuel costs don’t concern me, because you and every other American taxpayer is buying my gas…In the meantime, I’m going to file my quarterly tax estimate with the IRS this week. Thanks for paying my $983.55 dollar gasoline bill this quarter.

Another commenter name “Cervus” took issue with my “religious” tone on the issue:

I suggest that if you really believe as you do, lead by example. Remember, you’re a member of this “free ride”. If you want to consume as much as the average 3rd world citizen, you’re more than welcome to it. What’s stopping you?

…
You have options. You can live as energy efficiently as you want. So use them, and don’t lecture the rest of us on what you think is the right way to live. You sound like a street corner preacher telling everyone that they’re sinful and they’re going to Hell.

I replied that I do try to set an example:

First off, I drive an efficient hybrid, which CO2 I still pay to offset. I also offset the carbon from my [home and business] electricity and gas consumption, which cost about $250 for the last year. Every time I take a flight, I offset the CO2 from the flight. I participate in the LADWP’s green power program as well. Having said that, it’s not near enough. I would like to use zero fossil fuels, and soon it will be possible. As soon as it’s practical, I will do it.

Funny how anyone who gets passionate on an issue–no matter how important–is accused of being ‘religious.’ The difference here is that Hell doesn’t exist, but a ruined Earth is a distinct possibility. Of course the Earth isn’t going anywhere, but it may become far more hostile to human life as it warms. What this exchange has reminded me is that it’s not just a battle against automakers and government policy. We humans are fighting ourselves. There’s a group of people who just cannot conceive that their actions have consequences and that they may need to change their behavior–even a little bit, and even temporarily. Worst of all, they fail to understand that a more efficient and cleaner world is actually a better one, even at delivering the goods they desire.

Imagine if Americans could drive big and luxurious vehicles with zero impact on the environment. (For that matter, imagine if everyone in the world could also have access to clean drinking water.) It’s certainly a possibility, but it will never happen under the old industrial model. We have to move to a central policy of sustainability and Natural Capitalism. As long as government policy remains friendly to unsustainable methods of transportation, the better ones (such as battery or fuel-cell electric vehicles) will never catch on. Which is why it’s so important to implement things like the increased CAFE standards. Here’s a thought experiment: What if the original CAFE regs from the 1970’s had been written to include light trucks? We’d be living in a different world. We might not have had to go to war in Iraq, and we’d certainly be importing less oil. We might even have widespread use of electric vehicles (even trucks) by now.

As I’ve repeatedly stated, this problem is not some conspiracy of Big Oil. We American citizens have brought this on ourselves through our energy gluttony. And the same companies who have been selling us their dinosaur trucks are now trying to get the government to extend and expand their folly. Don’t let them get away with it. We can do better.

Update: Well, it’s 2022, and the American battle against fuel efficiency is still raging. California just announced that it will ban sales of new gasoline cars by 2035, and the same chorus of efficiency-haters is outraged once again. I’ve never seen such hostility to a new product as currently exists against electric vehicles. At the same time, automakers are selling every single EV they can screw together, at hefty prices, and with long wait times. Sales of internal combustion engine vehicles peaked worldwide five years ago in 2017, yet their defenders somehow still believe that the EV transition can be reversed. It makes no sense that anyone would be against a better and cheaper mode of personal transportation, which has the added benefit of producing far less greenhouse gas emissions. I’ll be glad when this battle is finally over. By then electric cars will just be called “cars.” Sigh. –Sean Prophet, August 2022

Conspiracists On The Rampage

I completely agree!! I think if Americans paid what other people in other countries for gas they certainly would be more concerned about the environment. Canada was paying $6 a gallon 6 years ago when my husband and I went and most people just walked or drove mopeds. not many fat people on the streets there. lol

[…] Sean at Black Sun Journal skilfully refutes an initiative from the automotive industry to down-play the problems our environment faces, with Automakers Launch PR Blitz to Halt Standards. […]

Not only do you sound religious in your fervor, you sound downright fundamentalist and militant, and you know what that did to Richard Dawkins, don’t you? He sold millions of dollars in books and…ummm… and…