The Human Body Is Never Undignified
LOGIN
Sunday, December 4, 2022
Top Posts
What’s Up With the Nazi “Black Sun” Rune Wheel?
Elizabeth Clare Prophet Claimed To Be ‘Clairvoyant’
The Eightfold Path of Denial of Death
Why I Left The Radical Secular Podcast
Miss R*EVOLutionaries: Panel Discussion
Money Is Not A “Shared Fiction”
Beliefs About God Won’t Make You Moral
This Is Not Fine!
Wealth Concentration Leads to Feudalism
Is Something Unclear About What’s Wrong With America?
SUBSCRIBE
Archive

The Human Body Is Never Undignified

How could a god be ashamed of the natural body of its own creation? 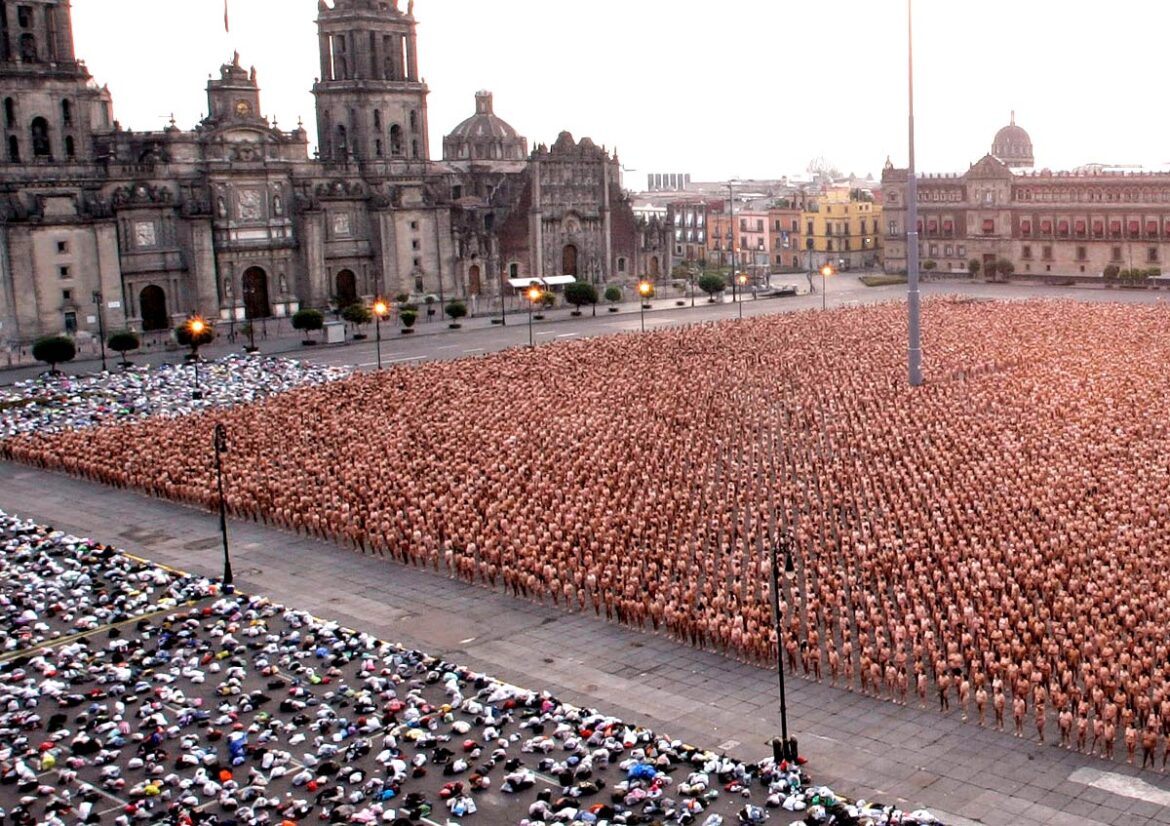 Photographer Spencer Tunick managed to pull off a photo shoot today at Zocalo Square in the heart of Mexico City with 18,000 nude volunteers–a record.Reuters reports this could be a sign Mexico’s historic prudishness may be on the wane. But always looking backward, the older generation and the church saw it as a “loss of dignity.”

“They’re losing dignity as men and women,” said 63-year-old Armando Pineda, leaning against the cathedral and watching the now-dressed models leave the plaza. “It’s an offense against the church.”

Funny, because what I see is people becoming less uncomfortable with themselves. I see people becoming more accepting of a wide range of body types as being worth looking at (instead of only finding “porn-star quality” nudes acceptable).

I see the bridging of generations who have lived in shame at seeing and being seen in their natural state. I see people celebrating their vulnerability and humanity. I see people who would rather make love than war. I see the absolute opposite of the insane killers who on April 7, 2007 publicly murdered Du’a Khalil Aswad, a 17-year-old Kurdish Iraqi girl, for having a boyfriend of the wrong religion. If you watch the horrid video of the murder, one of the killers covered up the girl’s writhing crotch and legs with a jacket (can’t have nudity at a stoning, you know), before he resumed kicking her in the face, and others dropped more chunks of concrete on her battered body. The contrast between these two events couldn’t be more striking.

Most of us would not want to disrobe in front of our friends, nor find it appropriate for nudity to become publicly acceptable. But imagine how much we would have to change as a society for this to become widely practiced. I would argue that in spite of the uncomfortability some might have, a world that accepted public nudity would be a better place.

In Mexico, here are some recent developments:

The capital of the world’s second-biggest Catholic nation, where tough-guy masculinity and family loyalty are held dear, has recently challenged some important traditions.

Also, gay couples are getting hitched in civil ceremonies thanks to recently passed laws in the capital, and lawmakers plan to debate whether to legalize euthanasia.

It may seem like a semantic coincidence, but I find it highly ironic: “Nudism” is sometimes called “Naturism.” And the most vocal opponents of nudity are those who believe in the supernatural.

It’s time to stop celebrating the imaginary and start celebrating ourselves. These volunteers and Tunick should be hailed as champions of the ultimate in human dignity.

Psychic: “What we do is entertainment.”

Jerry Falwell’s Death Is Cause For Celebration

The Catholic Church lost its dignity a long time ago and has lived in arch deception for centuries. There have also been great people keeping the church alive. I think when people see nudity it takes them back to the Garden of Eden, when Adam & Eve were ashamed because they became spiritually naked and lost their light.

[…] As I was reading through my feeds tonight, I saw that Sean Prophet had posted up an interesting piece on a photograph of 18,000 nude participants in Mexico City’s Zocalo Square and how the Church sees it as a loss of human dignity. From a photographic standpoint, getting this many people together for a single shoot is simply amazing. I know from shoots I’ve been on in the past, getting one person (the model) to cooperate is difficult enough let alone another 17,999 people. But this is not what struck me as truly amazing. […]

Its good to see other coutries, especially Mexico advancing. Too bad they are leaving America in the dust.

Humans didn’t always wear clothes and still don’t in some societies. Religion has a lot of responsiblity in teaching us to shame our bodies.

My husband first told me about that girls stoning. I can’t look at the pics much less the video. It just makes me cry. The girls family lured her back after she ran away to be with her lover by telling her all was forgiven and that they still loved her, only to have her family and towns people waiting there to stone her. It’s just heart breaking!

Excellent, though provoking post. It ties in to a generally messed up attitude towards sex and sexuality.

See also Michel Foucault’s The History of Sexuality. Great exposition on the Victorian morality towards sexuality that is still with us today.

Hear, hear!! Anyone who’s visited my site knows I’m all for nudity. ;-) I think the human body is amazing. Not always beautiful, but I applaud art like Tunick’s

What is baffling to me is why religious people should think the naked human body is somehow sinful. After all, they believe their god created it. So how could it be anything but good?

I’m not about to watch that video. I don’t like fake movie violence. I watched a video of a palestinian father and son being shot to death by Israeli soldiers and I still can’t get it out of my head.

I had a professor who was trying to make a point about how backwards our culture is. He said he saw two students sitting in he grass kissing, and people were shaking their heads and saying things like “get a room.” Another time, he saw two students fighting, and a crowd quickly gathered to watch.

I’m trying to raise my boys without a puritanical fear of sex and nudity, but it’s hard. They were playing a video game called God of War, and after slashing through guards, zombie things, and a giant dragon, my son covered his eyes and said, “This is the bad part” as a topless woman appeared.

They are little nudists, though. They don’t tink anything of running around the house naked, so maybe there’s hope for them.

But I do think that worshipping the supernatural reduces one’s appreciation for the natural world. And participating in a religion which views the natural world as sinful and wrong increases violence and crimes against humanity.

I want to live in a world where kissing is beautiful and fighting is shameful.