Drudge Stoops to Personal Attack After ‘Truth’ Oscar Win
LOGIN
Sunday, December 4, 2022
Top Posts
What’s Up With the Nazi “Black Sun” Rune Wheel?
Elizabeth Clare Prophet Claimed To Be ‘Clairvoyant’
The Eightfold Path of Denial of Death
Why I Left The Radical Secular Podcast
Miss R*EVOLutionaries: Panel Discussion
Money Is Not A “Shared Fiction”
Beliefs About God Won’t Make You Moral
This Is Not Fine!
Wealth Concentration Leads to Feudalism
Is Something Unclear About What’s Wrong With America?
SUBSCRIBE
Archive

We're all prisoners of the fossil-energy system 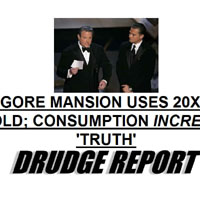 Al Gore’s Oscar win must have really gotten under Matt Drudge’s skin.Today, he stooped to a new low in his quixotic battle against the growing global awareness of human-induced climate change. Trumpeting in banner headlines, he also played to notions of class warfare with allegations of Gore’s “20X AVERAGE HOUSEHOLD” electricity usage.

Last night, Al Gore’s global-warming documentary, An Inconvenient Truth, collected an Oscar for best documentary feature, but the Tennessee Center for Policy Research has found that Gore deserves a gold statue for hypocrisy. Gore’s mansion, [20-room, eight-bathroom] located in the posh Belle Meade area of Nashville, consumes more electricity every month than the average American household uses in an entire year, according to the Nashville Electric Service (NES). In his documentary, the former Vice President calls on Americans to conserve energy by reducing electricity consumption at home. The average household in America consumes 10,656 kilowatt-hours (kWh) per year, according to the Department of Energy. In 2006, Gore devoured nearly 221,000 kWh, more than 20 times the national average.

Do we need to reiterate? Al Gore is a global diplomat and former U.S. Vice President. He has crisscrossed the world with his message, and it’s getting through. Even while Vice-President, his use of Air Force Two raised hackles. But let’s review: The United States is the world’s leading fossil-fuel consumer, and it is an empire. The tools of statecraft are hugely expensive and polluting, but no politician can succeed without them. It’s clearly a lesser of evils situation: leaders can sit with the status quo and do nothing, or they can use the tools at their disposal to raise consciousness. Gore is clearly doing the latter. Despite all his flying and consumption, Gore’s consciousness-raising has set in motion events which have single-handedly removed more CO2 from the atmosphere than any other politician in world history.

Need I point out that there are billions of climate-denying consumers worldwide, who also have huge energy and carbon footprints, and aren’t doing a thing to change the situation? We can whine about Gore’s usage of polluting aircraft, but thousands of VIPs and politicians constantly fly their equally polluting personal aircraft all over the world, and not a peep from right-wing media.

It would be a welcome step if Gore could convert his personal electricity usage to renewable energy. But he is involved with a network of organizations who support green energy. Many of these companies deal in REC’s, a method of offsetting the CO2 effects of power consumption through support of wind projects, greenhouse gas disposal, and methane reductions from feedlots, etc.. I researched this for my own energy usage, and last year carbon-neutralized both my vehicles and all my business electricity and gas usage through a company called Terrapass for $243.90.

I’d bet my bottom dollar that Gore and his supporters also offset their energy usage this way. (It was in the credits of “An Inconvenient Truth” that the film was made with a zero carbon footprint.) As savvy politicians, they’d be insane not to.

UPDATE: Al Gore has responded to charges that his house consumes more electricity every month than many American households use in an entire year, with the new Oscar winner saying he has taken many steps to reduce the carbon footprint in his home.

The office of the former vice president and former presidential candidate told Thinkprogress.org. that he has signed up for 100 percent “green” power through Green Power Switch — a renewable energy program through the massive local electric distribution network, the Tennessee Valley Authority.

Gore’s representatives said he also has installed solar panels and uses compact fluorescent bulbs and other energy-saving technology and he buys carbon offsets: a service that indirectly tries to reduce the total carbon emissions of individuals or organizations.

“What Mr. Gore has asked is that every family calculate their carbon footprint and try to reduce it as much as possible,” Gore’s office said, according to Thinkprogress.org. “Once they have done so, he then advocates that they purchase offsets, as the Gores do, to bring their footprint down to zero.”

But Drudge says nothing about this. In his usual muckracking style, he found some flack at the Tennessee Center for Policy Research to go on record about Gore’s power and gas bills. Where’s the other side of the story? What more can we expect from an opportunist who launched his career at the expense of the first U.S. President to get impeached for a blow job?

The silver lining: Only when a case has become so hopelessly weak do the holdouts resort to such desperate tactics. And on the same day, Drudge also linked to a Reuters report that five western U.S. states adopted an agreement to leapfrog the federal government and mandate C02 targets with cap-and-trade.

Clearly Drudge is used to having the bully pulpit, and unaccustomed to any check or balance on his power. He’s becoming more and more out of touch, and more and more like his friend Ann Coulter every day. I vote we send them, Michael Crichton, and the entire global-warming denial club to live in the Maldives. With better than 90% certainty of human-induced climate change, they’re asking the human race to play Russian roulette with a 10-chambered gun loaded with 9 1/2 bullets.

How Personal Shadow Work Is Integral To Perceiving Reality

Hey, I saw that you had mentioned offsets and I wanted to let you know that there is a new report published this last week on the offsets industry, The Carbon Neutral Myth – Offset Indulgences for your Climate Sins. Free download from http://www.tni.org

Carbon offsets are the modern day indulgences, sold to an increasingly carbon conscious public to absolve their climate sins. Scratch the surface, however, and a disturbing picture emerges, where creative accountancy and elaborate shell games cover up the impossibility of verifying genuine climate change benefits, and where communities in the South often have little choice as offset projects are inflicted on them.

This report argues that offsets place disproportionate emphasis on individual lifestyles and carbon footprints, distracting attention from the wider, systemic changes and collective political action that needs to be taken to tackle climate change. Promoting more effective and empowering approaches involves moving away from the marketing gimmicks, celebrity endorsements, technological quick fixes, and the North/South exploitation that the carbon offsets industry embodies.

I’m sure, like all human constructs, that carbon-offsets have the potential for cheating. And absent government action and regulation, they are essentially private cooperative activity. I’m sure their quality varies as with most products. The industry should strive for transparency.

In addition, there is nothing in the current regime to keep one families’ conscientious offsetting from being nullified by another families’ increased consumption. The whole thing is kind of an honor system–sort of like a boycott or strike, the impact of which can be negated by those who don’t want to participate.

But I would not go so far as to call them “modern-day indulgences.” They are the voice of people who see their government and fellow citizens doing nothing about a problem which poses an existential threat to humanity.

So carbon-offsets represent the choice to do something rather than nothing. To embrace an imperfect solution rather than none at all. But they do illustrate the folly of partial measures when what is needed is true universal action.

I think that your assessment of Drudge is correct and also have seen many of these offset purchases as gift cards at my local Whole Foods, the next I shop I will buy one! Great work!

[…] Matt Drudge must be choking. He has done more to oppose and discredit Al Gore than any single person or news outlet. Today he was forced to run the headline of his bete noir winning the Nobel Peace Prize. Sweet. But it’s not just a simple turnabout or poetic justice. Al Gore is fighting for our lives and the lives of our children–whether we yet realize it or not. […]