Another Martyr for Women’s Rights and Sanity
LOGIN
Sunday, December 4, 2022
Top Posts
What’s Up With the Nazi “Black Sun” Rune Wheel?
Elizabeth Clare Prophet Claimed To Be ‘Clairvoyant’
The Eightfold Path of Denial of Death
Why I Left The Radical Secular Podcast
Miss R*EVOLutionaries: Panel Discussion
Money Is Not A “Shared Fiction”
Beliefs About God Won’t Make You Moral
This Is Not Fine!
Wealth Concentration Leads to Feudalism
Is Something Unclear About What’s Wrong With America?
SUBSCRIBE
Archive

Home Psychology Another Martyr for Women’s Rights and Sanity

Another Martyr for Women’s Rights and Sanity

Why are religious men so threatened by liberated women? 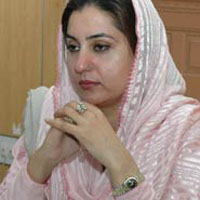 It is a dark day for women’s rights.From the Times Online:

Zilla Huma Usman, the minister for social welfare in Punjab province and an ally of President Pervez Musharraf, was killed as she was about to deliver a speech to dozens of party activists, by a “fanatic”, who believed that she was dressed inappropriately and that women should not be involved in politics, officials said.

Mrs Usman, 35, was wearing the shalwar kameez worn by many professional women in Pakistan, but did not cover her head.

The attack happened in Gujranwala, 120 miles southeast of Islamabad, where the minister’s office is based. As Ms Usman, 35, stepped out of her car – where she was greeted by her co-workers throwing rose petals – the attacker pulled out a pistol and fired a single shot at close range, hitting her in the head. She was airlifted to hospital in the provincial capital Lahore, but died soon afterwards.

The gunman, Mohammad Sarwar, was overpowered by the minister’s driver and arrested by police. A stone mason in his mid 40s, he is not thought to belong to any radical group but is known for his fanaticism. He was previously held in 2002 in connection with the killing and mutilation of four prostitutes, but was never convicted due to lack of evidence.

Mr Sarwar appeared relaxed and calm when he told a television channel that he had carried out God’s order to kill women who sinned. “I have no regrets. I just obeyed Allah’s commandment” he said, adding that Islam did not allow women to hold positions of leadership. “I will kill all those women who do not follow the right path, if I am freed again” he said.

If I were asked to describe (hypothetically) the genesis of the Islamic male-domination complex, it would look something like this: Back in pre-history, an unfit, tongue-tied trembling young male was rejected by a woman who was way out of his league. Rather than learn from the experience, this poor specimen of humanity got together with his friends and determined to use brute strength to suppress the charms of not just the woman who rejected him, but all women. These poor excuses for men decided to project out their sexual frustrations and urges onto the women in their society.

Women were “making them feel sexual.” Women were victimizing them with their beauty and unrequited love. Women were rejecting them. Poor babies.

So instead of learning to compete effectively for affections, these wretched men started a new meme: From now on, women would be forced to cover their bodies. Women would be made to feel ashamed in retaliation for their “making” men feel desire. They would be at the mercy of the male councils who–because they couldn’t win consensual love–used force and repression to rewrite the rules. Now that women are regaining their power all over the world, it is exposing the deep fears and inadequacies of the modern descendants of these early tyrants. The Islamic religion simply provides cover for the lineage of frustrated men who over dozens (perhaps hundreds) of generations have refused to negotiate fairly with women or treat them as equals.

Don’t be fooled. Many western liberals pin their hopes on the religious moderates. But look what happens when the moderates come to power. Usman was the epitome of moderate hope for Islam, and sat at the right hand of moderate President Pervez Musharraf (who has himself been the target of several attempted assassinations). How many more moderates have to die? Why do we have to learn the hard way that we need to crack down on extremist religious expression worldwide? Why must we wait to take action until these murderous religious walking time bombs are set off?

Speaking of people who kill others for religious purposes, I got a post up about the 8 year old devil soldier who was triumphantly slain by his own parents in recently Atlanta. That’ll learn him to consort with Satan!

This is a terribly tragic event. And martyr she has become. Unfortunately it is through these dark events that people are goaded out of their complacency to take stands they otherwise would not… physically, emotionally, mentally. This woman represents evolution at its inevitable finest. Everyone knows it. This male and his dogma is seen for the insanity and delusion that it is. Everyone knows it. Yes, even those who espouse it. This foul deed and others like it fester in the belly and rots from the inside out.

Life is the theatre. The ignorance of these individuals is seen for what it is. It is only a matter of time before all else follows.

Thank you Sean for not letting this important event going unnoticed! Shit like this goes on throughout the world and nobody bats an eye at it. What a sad event. I read a GREAT book by James DeMeo called Saharasia, its about the origins of child abuse and sexual repression. Its a think book, but I read it in a few days, it was so good. I couldn’t put it down.

I may not agree completely with James DeMeo’s studies in physics, but his studies in human behavior, psycho analysis, sex economics and indigenous peoples is very telling and right on the mark.