GM’s Macho Camaro
LOGIN
Sunday, November 27, 2022
Top Posts
What’s Up With the Nazi “Black Sun” Rune Wheel?
The Eightfold Path of Denial of Death
Elizabeth Clare Prophet Claimed To Be ‘Clairvoyant’
Why I Left The Radical Secular Podcast
Miss R*EVOLutionaries: Panel Discussion
Money Is Not A “Shared Fiction”
Beliefs About God Won’t Make You Moral
This Is Not Fine!
Wealth Concentration Leads to Feudalism
Is Something Unclear About What’s Wrong With America?
SUBSCRIBE
Archive

A lost opportunity to innovate 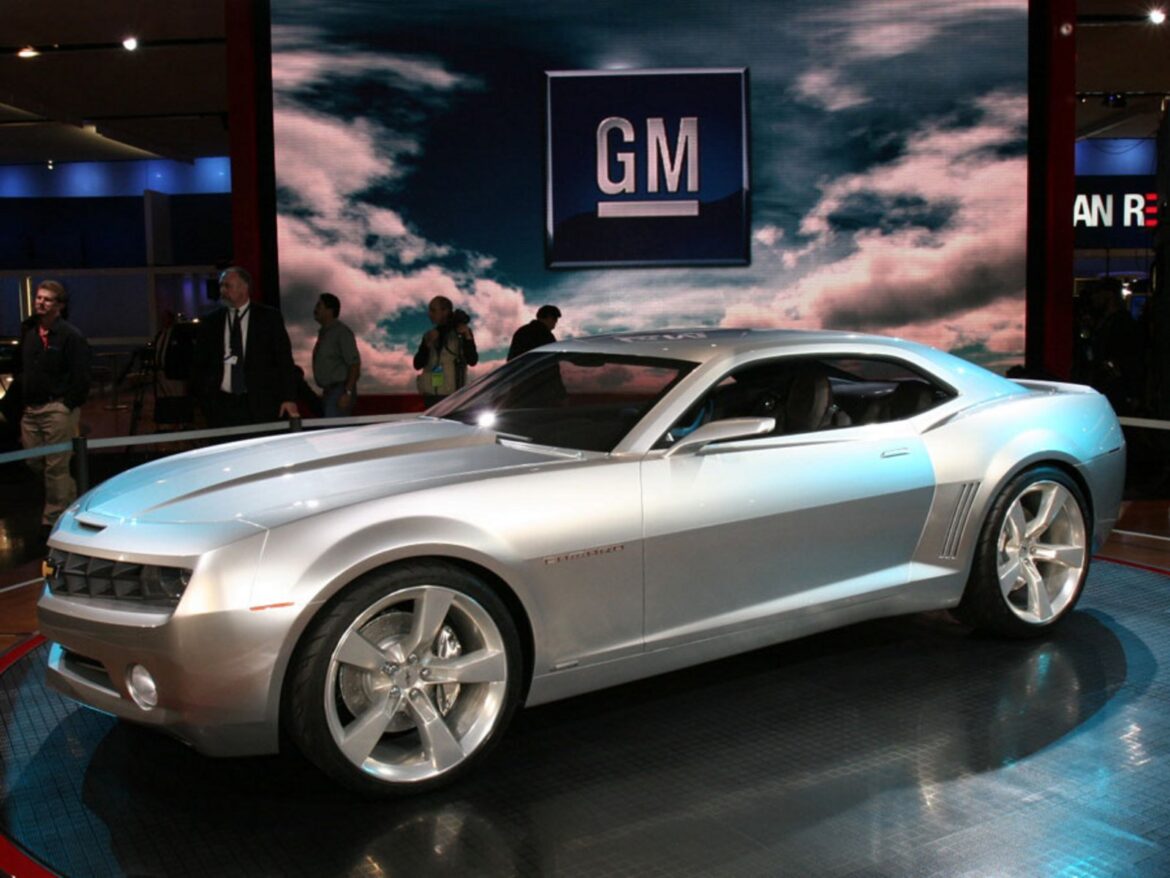 I‘m afraid it’s the beginning of the end for GM.Gentlemen, start your Enron. What a joke. GM has announced a redesigned 2008/2009 Camaro that’s about as relevant to today’s world as a Revolutionary War musket. This in the same week that Ford is slashing production 20% because of their dogged determination to keep marketing gas-guzzling Neanderthal road-hogs. What kind of drugs are these guys doing? Can I have some, please?

We’ve got carbon levels rising, and a worldwide water crisis that threatens to eclipse today’s worries about oil. All GM can come up with is this atavistic offering, appealing to the grossest of human macho impulses. Vroom, vroom. My cock’s bigger than your cock.

What will it take for the American public to make the connection between consumption, environmental destruction, and war? You know, the old bumper sticker about “How many lives per gallon?“

If oil externalities were priced in, and carbon offsets paid, (not to mention Iraq war deaths) pump prices would more than double, and this car would never make it to the prodution line. The whole petro-enterprise is based on false premises and government subsidies. China and India’s fuel demand are helping push prices to a more realistic level. (And even biofuels require scarce water for production). Maybe those countries can also sell us the efficient and sustainable cars that we can afford to drive. I hope GM gets a clue. Otherwise, they deserve to join the dinosaurs.

This car is obscene, the designer driving it should be designing video games. This car would be right at home in a simulator, along with the other muscle-cars of the designers’ boyhood. There, they could motor on–safe from any real-world consequences.

Will the real car designers please stand up? You know, the ones who create efficient electric cars that are ALSO fun to drive.

My comment at the GM blog, which I don’t think has a snowball’s chance of being published:

This is not a sustainable vehicle. I agree it looks/sounds great. But this kind of “innovation” is not going to keep GM from going bankrupt. Nor will it reduce the need for continued U.S. imports of oil from nasty parts of the world. I’d be amazed if the new Camaro gets more than the low 20’s average fuel economy.

We need real leadership from GM, which includes sustainable mobility. Flex-fuel vehicles are not enough without an equal amount of work on the supply-side. We need serious innovation and efficiency gains. There’s not enough cropland or water in this country to support biofuels at 20MPG. No amount of fuel would be enough if we keep wasting it.

Come on, GM, where’s the plug-in version of this car? Where’s your carbon-fiber 100MPG version?

You guys are hopelessly locked in to old ways of thinking. Macho exhaust sound may please some buyers, but it is a path to financial ruin for GM, and planetary crisis for the rest of us.

Note: It’s sad to look back on articles like this, and recognize the tremendous lost opportunity for GM and other large auto manufacturers. Tesla announced its original Roadster in 2006 and delivered its first model in February 2008. And then over the next decade grew to become the largest auto maker in the world (by market cap). Only by the late 20-teens did legacy automakers recognize what they had to do–right around the time when sales of internal combustion engine vehicles peaked in 2017. By 2025, electric vehicles will finally reach mass market adoption, as EVs reach 25% of total vehicles sold. Why did it take a complete upstart like Tesla to come along and convince car makers to do the thing that has been obvious to many of us for a couple of decades? –Sean Prophet, August 2022

We Love Our Violence, Just Don’t Make it Too Real

Marriage Equality For All Who Want It

A similar thing is happening here in Australia with one of our biggest car manufacturerâ€™s Holden recently unveiling its new fuel guzzling monstrosity. Their PR campaign advertises â€œover 1 billion dollars spend in R&Dâ€¦â€? â€“ gee guys, donâ€™t you think you could have aimed that R&D towards fuel efficiency instead of a bigger engine?

These monster cars will go the way of the dinosaur. In a decade or so, I imagine most people will be driving hyper efficient Japanese cars, and hopefully most of them will be all-electric.

This is a great article. I like your stance on this issue and GM should go the way of the dinosour. If I did not say it before, thanks for the heads up on the Chicago Tribune oil article, it was a fantastic read.

Im a V-8 nut myself, but I bought my car (2001 Mustang GT) back when gas was like $1.60 a gallon and I didnt know a damn thing about the gas market or the environment. I agree with what you have to say about the new Camaro: stylish looks, great sound, and one more reason why GM is hemorrhaging money. The Camaro is obsolete before it even got built. Its sexy looks are the only thing it has going for it honestly, I mean look at the re-released Pontiac GTO (an almost identical car)… that thing has sold slower than molasses in January.

The Camaro originally died because nobody bought it. This new one will probably make decent sportscar sales in the first few years, but will likely fizzle after that. Even the new redesigned Mustang which has had a swoon of positive attention isnt selling as much as it did in the 80s and 90s.

I want some damn performance division of some damn automobile company to bring out an electric or hybrid sportscar finally.

The only problem with sports cars and electric motors is storing all the fuel/energy. The motors themselves are already where they need to be technologically.

GM should have spent that Camaro money on R&D for an electric sportscar. Once the energy/fuel storage problem is addressed, the rest of the work is all downhill. Maybe GM would finally have a sportscar that would beat the Mustang in sales.

Your GM Blog message was published after all.

I added my own sarcastic little note.

you are clearly a homo, gg blowing toyotas ass.

Great points everyone. Aaron, did you check out the http://www.teslamotors.com site? I think it’s the electric car you’re looking for. Right now it’s 80K, putting it squarely in the realm of exotics. But they sold out their first run of a hundred cars in a week. Since this company was started by computer guys, you know, they have the Silicon Valley mentality, and updates, upgrades, and price decreases will now be coming to the car business.

Michael, thanks for the update about the GM blog. I would not have believed it. Nice comments over there about the engine noise CD. You may be joking now, but I’d bet my bottom dollar that someone will be putting either electroacoustic or air-pump-based fake exhaust systems on electric cars to give them that old fossil-engine roar.

I’ve been further contemplating my position about GM. A libertarian would say, let them keep selling whatever they want to sell, let the market decide. If GM were truly a market driven company, I would have no problem with this. But sadly that’s not the case. Aside from the staggering externalities such a company creates, its prosperity is intimately linked to the prosperity of the entire US economy. Therefore, as taxpayers and citizens we actually have a direct interest in how this company performs. And so far it’s looking like a debacle.

Here’s my scenario for the GM collapse: first, their debt is downgraded to junk status. Second, the company files for bankruptcy. Third, they approach the government for a Chrysler-style bailout. This is what worries me: the GM is too large for the government to allow it to collapse. They underwrite too many employee pensions, they are too large a part of the GDP, and they have powerful friends. So the taxpayer may yet end up footing the bill for Bob Lutz’ and Rick Wagoner’s stupidity. The cost could run into the tens of billions.

On a more positive note, Toyota and Nissan and Honda and others have been building US factories as fast as they could. Therefore the blow to the US economy of a GM collapse would be substantially less than it would have been 15 years ago. This fact, coupled with the much more precarious financial position of the US government today may be enough to persuade it to let GM fall.

One thing’s for sure, such a collapse would not help the Social Security system.

It would also hurt the economy in the short run, but maybe Toyota could just move in and take over the old GM factories. Their visionary management would certainly be an improvement. In a multinational world, where stockholders can be from any country, it doesn’t really matter who owns the company, US workers and parts suppliers will benefit.

I’m right with Aaron on this one. I love a good rumbling v8, but i’m not an idiot either. The biggest problem is that GM isn’t even trying. Even previous to moving to hybrids or electrics, there are PLENTY of ways to make fuel efficient, much cleaner burning, internal combustion engines. That could even be a start, but they refuse to even start down that path.

If you really wanted to, you could pull 90mpg out of a very torquey very powerful v8… but it takes someone like GM or Ford or somemthign to put the R&D into making it cost-effective.

But yea, Im excited about the Tesla. Its being built by Lotus apparently, which is a very good thing because Lotus is an excellent sports car manufacturer.

If the Tesla ends up being reliable and fast like the company claims, I bet that very quickly other manufacturers will get off their ass and try to do the same thing. Theres money to be made there!

And once electric cars start competing in actual race-style events (a la Speed Channel), their image as quality sports cars will really skyrocket.