Wafa Sultan On The Clash Between Civilization and Backwardness
LOGIN
Monday, December 5, 2022
Top Posts
What’s Up With the Nazi “Black Sun” Rune Wheel?
Elizabeth Clare Prophet Claimed To Be ‘Clairvoyant’
The Eightfold Path of Denial of Death
Why I Left The Radical Secular Podcast
Miss R*EVOLutionaries: Panel Discussion
Money Is Not A “Shared Fiction”
Beliefs About God Won’t Make You Moral
This Is Not Fine!
Wealth Concentration Leads to Feudalism
Is Something Unclear About What’s Wrong With America?
SUBSCRIBE
Archive

Wafa Sultan On The Clash Between Civilization and Backwardness 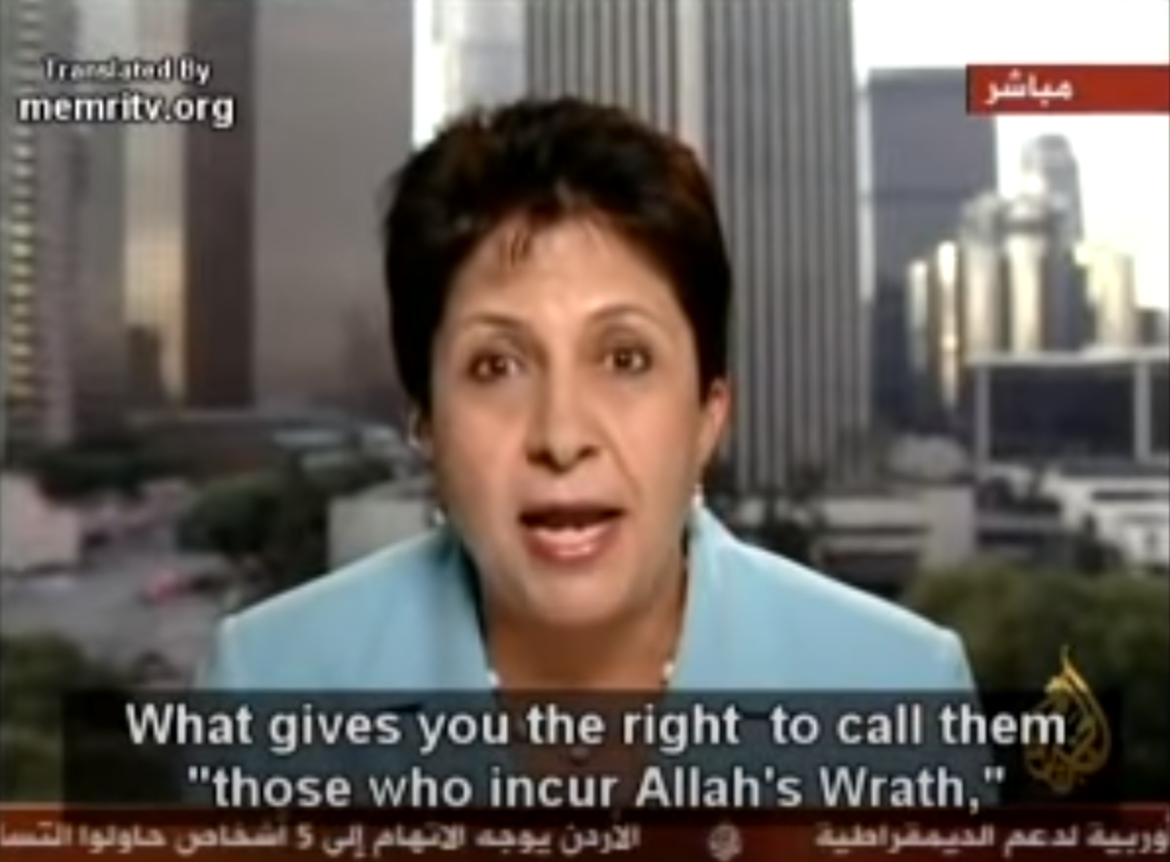 Interviewer: I understand from your words that what is happening today is a clash between the culture of the West, and the backwardness and ignorance of the Muslims?

Wafa Sultan: Yes, that is what I mean.

Interviewer: Who came up with with the concept of a clash of civilizations? Was it not Samuel Huntington? It was not Bin Laden. I would like to discuss this issue, if you don’t mind.

Wafa Sultan: The Muslims are the ones who began using this expression. The Muslims are the ones who began the clash of civilizations. The Prophet of Islam said: “I was ordered to fight the people until they believe in Allah and his messenger.” When the Muslims divided the people into Muslims and non-Muslims, and called to fight the others until they believe in what they themselves believe, they started this clash, and began this war. In order to stop this war, they must re-examine their Islamic books and curricula, which are full of calls for takfir and fighting the infidels.

All the useful scientific books that you have today are theirs, the fruit of their free and creative thinking. What gives you the right to call them “those who incur Allah’s Wrath” or “those who have gone astray” and then come here and say that your religion commands you to refrain from offending the beliefs of others? I am not a Christian, a Muslim, or a Jew. I am a secular human being. I do not believe in the supernatural, but I respect other people’s right to believe in it.

Muslim: Are you a heretic?

Wafa Sultan: You can say whatever you like, I am a secular human being who does not believe in the supernatural…

Muslim: If you are a heretic, there is no point in rebuking you, since you have blasphemed against Islam, the Prophet, and the Koran…

Wafa Sultan: These are personal matters that do not concern you. Brother, you can believe in stones, as long as you do not throw them at me. You are free to worship whomever you want, but other people’s beliefs are not your concern, whether the believe that the Messiah is God, son of Mary, or that Satan is God, son of Mary. Let people have their beliefs. The Jews have come from the tragedy (of the Holocaust), and forced the world to respect them. With their knowledge, not with their terror. With their work, not their crying and yelling.

The Muslims must ask themselves what they can do for humankind, before they demand that humankind respect them.

Oil Safari: A Tank of Gas, A World of Trouble

Very interesting find Sean, thanks for that. I still think that the whole world gives Judaic culture to much of a ‘get out of jail free’ card, and are unwilling to criticize Jewish culture (largely because of the holocaust, which is understandable), but i WILL agree that Muslim culture, in general, is much MUCH move violent.

I think this issue is much more complicated that what Sultan says. This is more about power and money. The jews were backed up by the world after WW II, and nobody cared about the Palestinians or that they were already living there. The world gave weapons to the Jews, technology, money. What did they give to the Palestinians? Knowing that that zone was full of Palestinians they helped the Jews settle there and become the owners of their land. Now the Jews have check points all over the Palestinian lands. They tell the Palestinians who get in our out. Why can’t the Palestinians do the same? Because the World only like the Jews.

Since Palestinians had no power, weapons or technology, their only weapon was their hatred; something that religious fundamentalist love to us for their own agendas. The injustice against the Palestinians is what moved many to this kind of fanaticism. 21st century islamic terrorism is a creation of the Western World. Don’t blame their religion, for the Jews and Christians have as much filth and hatred in their own sacred laws and books.

It’s all about cycles. During the Middle Ages, the islamic world had a scientific golden age. Their fundamentalism is relatively a recent thing. We helped create that monster. Now we must deal with it.

My intent is not to give a free pass to Judaism. At the risk of repeating myself, I’m supporting secular regimes, and liberal democracy. To the extent that Israel and other countries participate in better forms of government, they have my support.

To the extent that Jews and Christians have fundamentalist elements, they have my condemnation.

Religion is a personal, private matter, and needs to be out of the purview of government.

Wafa Sultan’s point is that no matter what their cause, Islamic fundamentalists will never achieve the moral high ground by acting out their extreme violent tantrums. They will never prosper by giving their governments the power of sharia law.

Until they moderate their ideology, and give up their attachment to the supernatural, they are doomed to an endless cycle of violence and ridicule by the rest of the world.

I don’t buy the argument that the injustice against Palestinians is an excuse for Jihad. By that same token, Native Americans could justify violent terrorism against the U.S. government. The Palestinian situation is no worse than other colonial occupations. It concerns the people who are affected, not 1 billion other Muslims.

Many westerners rightly feel sympathy for the Palestinians. They also often have a stance of cultural relativism, condescending that Arab cultures have to be looked at more forgivingly: (Why, because they are less human than we are?). For whatever reasons, many liberal intellectuals are often not comfortable taking a firm stand against fundamentalism. I think it’s a shame. By failing to take a stand, we will prolong this cancer on humanity.

Why don’t other oppressed people act this way? Who wants the Jihad to continue and expand, and what are their goals? Until we answer those questions, we won’t be prepared intellectually or emotionally to face the threat.

I think Wafa Sultan is impressive and I admire her secularism. I agree with her denunciation of anyone who kills others for their infidel status. But we must also remember that those who blow themselves up in Israel are not always doing so because they want to kill infidels but because they are in a war with an enemy that will always win by conventional means. I don’t condone suicide bombing but I know why they do it. They have nothing to lose. I know you don’t like what you’re reading right now but there is no other reason for a promising medical student to join a suicide mission. You will say, “It’s the promise of paradise, stupid!” But I have heard the stories of many bright, idealistics young intellectuals who were excited about raising a family and having a successful professional life but who instead joined the jihad over the last twenty years.

At the end of her talk, Wafa Sultan says only the Muslims have killed others because of their beliefs. This is not true, the Hindus in India have spilled much Muslim blood …. because they are Muslim, pretty much. I just want to be sure we don’t say that there are no others besides Muslims who kill for their beliefs. And remember the Crusades — Christian kings going to reclaim the Holy Land from the unfaithful savages.

“there is no other reason for a promising medical student to join a suicide mission.”

There is no reason AT ALL for a promising medical student to join a suicide mission. They can have a career anywhere in the world, and lift their family out of poverty/ignorance. They can also be a much greater asset to whatever cause they espouse. Any such promising student who blows themselves up has been terminally infected by the mind-virus of religion.

I don’t buy the argument that such a person has nothing to lose. They have everything to lose. Since this life is the only one they have, the only reason they could be convinced to end it so tragically is if they thought there was something more meaningful in heaven.

You are kind of arguing both sides. If it’s political, and they don’t believe in an afterlife: a medical student would not have “nothing to lose.” They would lose their life. If it’s religious, they would not think of dying as losing–because they gain eternal life. Clearly, it’s religious. The political explanation just doesn’t hold water. There are plenty of other people all over the world with “nothing to lose” such as the victims of genocides and political savagery, who live under far worse conditions than the Islamic world. Sudan, the Congo, and Zimbabwe come to mind. Unless Islam is involved, these people do not generally resort to suicide bombing.

Malaysia and Bali are comparatively wealthy countries, and yet we still see bombings there–by radical Islamists who certainly are not oppressed. In Indonesia, with a $3,600 per capita GDP, we see a strong radicalism taking root. Jihadism is a trans-national movement with worldwide goals for dominance. The downtrodden of Islam are trotted out on cue, every time the Jihadists commit another one of their brazen and outrageous slaughters. We repond to their propaganda because we are forced try to wrap our heads around the unthinkable. There…just…must…be…some…explanation…some…justification…for the carnage.

The only people Wafa Sultan specifically defended were the Jews and Buddhists. And I’m sure she was talking about average citizens, not the Israeli government. There is an objective hierarchy of behavior of religions. Jews and Buddhists are the least-bad of the religions. Islam is by far the worst with Christianity also near the bottom. Hinduism falls somewhere in the middle of the spectrum. I think creating documentation of this hierarchy would make an interesting anthropology thesis.

The crusades?? Dead argument. They were hundreds of years ago. Again, why aren’t the Native Americans throwing bombs then? The Crusader/Zionist propaganda is just a thin rhetorical cover for unrestrained Jihad. There is no Christian army fighting today–(Bush notwithstanding, the U.S. military is largely secular, and I don’t care if Muslims don’t see it that way.)

We in the west are too soft and sympathetic. We are also paralyzed and outmaneuvered in the P.R. arena by an enemy we do not understand. We tried the same intellectual accomodation with Communism. When the threat evaporated–so did the feeble attempts at accommodation.

Jihadist leaders are not playing by the same rules we are, and they use our conscience against us. In the end, they only understand the sword. If the moderates can escape this characterization, they’d better do it soon and gain some political traction–or they will pay the price in blood for their more radical brethren.

It’s a clear choice: Civilization or barbarism. There is no accommodation.