Argument for Design (Ad Absurdum)
LOGIN
Sunday, December 4, 2022
Top Posts
What’s Up With the Nazi “Black Sun” Rune Wheel?
Elizabeth Clare Prophet Claimed To Be ‘Clairvoyant’
The Eightfold Path of Denial of Death
Why I Left The Radical Secular Podcast
Miss R*EVOLutionaries: Panel Discussion
Money Is Not A “Shared Fiction”
Beliefs About God Won’t Make You Moral
This Is Not Fine!
Wealth Concentration Leads to Feudalism
Is Something Unclear About What’s Wrong With America?
SUBSCRIBE
Archive

There's no need for a designer 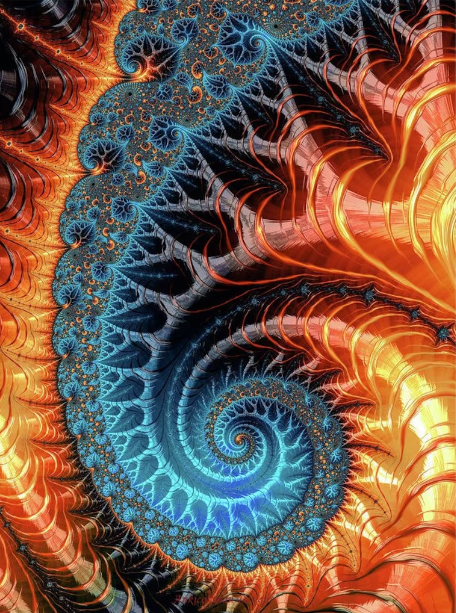 The continuing controversy over intelligent design highlights a number of really bad arguments.One of the worst in recent memory has to do with a glaring fallacy about science and technology as products of man (and therefore god). I received an e-mail from a correspondent, discussing the issue of fractals.  I had sent this correspondent a number of example images, including the one reproduced here, showing how simple recursive algorithms could produce a wide variety of forms similar to those found in nature.

My point was to show the correspondent that it was not necessary for a god or higher intelligence to have created or designed flowers, trees, or other seemingly complex objects found in the natural world.  It is well-established in scientific circles that most forms taken by plants and flowers can be explained through fractal geometry.  Instructions coded in DNA cause the plants to grow in the same manner as the recursive algorithms used to form computer-generated images.  This use of recursion is a brilliant form of natural data compression, which gives rise to seemingly infinitely complex and random shapes, from simple mathematical functions.

The correspondent completely misunderstood my argument.  He thought I was arguing that computers had generated the fractals of their own accord.  He attempted to punch holes in my argument by stating the following:

For example, literally thousands of designers were involved in the creation of the computer equipment that was used to produce and display the graphics.  You can break that down into a great level of detail, going into the process by which each component on the mother board, was designed and manufactured, and this on machines which also had to be designed and manufactured, and themselves composed of a vast array of consciously designed and created components.  For example, integrated circuits, resistors, capacitors, transistors, connectors, and wiring.  In connection with each of these components, you could visit the factory in which they are manufactured, and verify the truth of this, and at the same time see, that they are given birth out of the very womb of the concept of conscious design.

He wrongly stated that I was claiming that the shapes and patterns contained in a fractal imagery were proof that “order and beauty can proceed out of nothing.”

Nothing could be further from the truth.  First of all, the brilliance and beauty of fractal geometric patterns comes from the fact that they are specifically not designed.  Rather, they are the results of iterations of formulas in recursive patterns.  Even though the outcomes can be predicted, within certain classifications from certain formulas, it is clear that what is being replicated on a computer through fractal geometry is can produce a different level of order than what came from the original formula–something akin to the process of natural growth and evolution itself.

This process of self-referential self-replication, is a very loose metaphor for how the human brain develops, with its hundred billion or more neurons, from human DNA, which only contains about 30 million instructions. (The brain contains many repetitive structures.)

The correspondent’s point about computers, chips, motherboards, and programs being works of man proves nothing.  He is assuming, a priori, that man was created and designed by God, therefore, all the works of man by proxy originate from God.  This is a completely circular argument, and rests totally on the presupposition of ‘creation.’  It proves absolutely nothing.

Fractal geometry, chaos theory, and the Mandelbrot set of functions are simply a special case of the larger field of biomimetics.  This is engineering of new processes and products, based on the processes observed in nature.  A byproduct of this research, is reverse engineering of nature, figuring out the building blocks of life.  The complexity of life is largely reducible to the execution of relatively simple DNA instructions.

In “The Blind Watchmaker” Richard Dawkins showed how random DNA mutations (when evaluated for their efficacy through the feedback loop of evolutionary fitness) resulted in beneficial changes to the life form.  Dawkins has not claimed to show that life, beauty, or symmetry evolved from “nothing.”  Dawkins has only shown us the mechanism through which such evolution could occur from basic chemistry.

But that’s a hell of a lot better then the empty circular claims advanced by creationists.

A just-so story is better than the Christian’s nutso story. (see how that rhymes?)

Oh my God what a way to misinterpret your argument!

One big problem with creationists is that they TOTALLY MISUNDERSTAND the nature of “order”. The total order in the universe remains constant 100% of the time. Even the term “entropy” doesnt have to do with “order” the way creationists think it does.

If you really want a mind-blowing experience, you should check out Everything Forever (www.everythingforever.com). That site talks about order, patterns, and possible states in ways that are so fundamentally simple, yet at the same time totally revolutionary in that nobody grows up seeing reality in such a clear way.

The best place to start reading at Everything Forever is at http://www.everythingforever.com/st_order.htm (at “part 1” of the website). I swear you will never look at a snowflake, or a creationists argument, the same way again.

Oh yea, and part two of the Everything Forever website really gets down with the “two kinds of order” that will trip you out. From snowflakes to chessboards to the entire universe, the same principles about order and patterns applies universally. Its amazing:

“To read Dawkins is to poison the soul.”

Exactly how does learning about the natural world poison the soul? Get a grip, Simon. People with your mentality are a walking advertisement for religion-inspired ignorance. Nothing I could ever say would prove that point as well as you just did.

This theory about human consciousness is of course completely falsified by the fact that there are people without a brain. They are completely normal accept for the fact that they donâ€™t have a brain.
See:
http://www.ncbi.nlm.nih.gov/entrez/query.fcgi?cmd=Retrieve&db=PubMed&list_uids=6909910&dopt=Citation

It is always interesting to see how people become what they fight.

Gerrit, your link is not working. A person without a brain? This I’d like to see…

Sorry for the link. But you can search in google with the string
“Is your brain really necessary?” the name of the original article from
British neurologist John Lorber.
See for instance:
http://www.flatrock.org.nz/topics/science/is_the_brain_really_necessary.htm

It wouldn’t surprise me if he knew exactly what you were talking about. A popular technique in a debate you cannot win on logical counterpoints is to shift the direction of the debate elsewhere, ignore the points posed, and make your own (seemingly related but irrelevent) ones. This sometimes works on lay judges and audiences, and can even confuse opponents at times (though you obviously saw through it). My guess is that he wasn’t being strictly unintelligent (though that certainly played a role) but rather deceptive and self-righteous (the two cardinal characteristics of apologists *ahem* apologetics) instead. I shudder to think of the internal inconsistencies that the poor person’s ideology must have. But when you read Bibles, I’m sure you get used to it.