You Should Know The Four Most Common Logical Fallacies
LOGIN
Monday, December 5, 2022
Top Posts
What’s Up With the Nazi “Black Sun” Rune Wheel?
Elizabeth Clare Prophet Claimed To Be ‘Clairvoyant’
The Eightfold Path of Denial of Death
Why I Left The Radical Secular Podcast
Miss R*EVOLutionaries: Panel Discussion
Money Is Not A “Shared Fiction”
Beliefs About God Won’t Make You Moral
This Is Not Fine!
Wealth Concentration Leads to Feudalism
Is Something Unclear About What’s Wrong With America?
SUBSCRIBE
Archive

Home Counterdisinfo You Should Know The Four Most Common Logical Fallacies

You Should Know The Four Most Common Logical Fallacies

Because you'll hear them everywhere 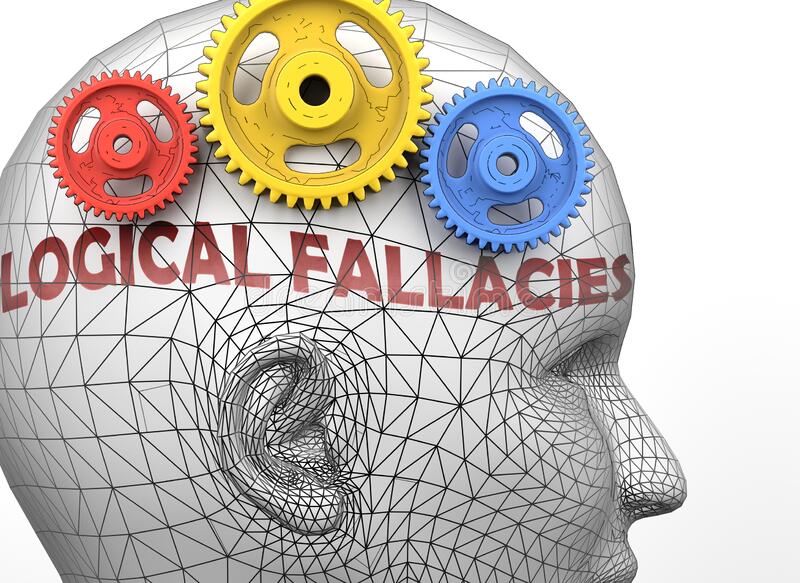 In nearly 5 years of blogging experience, I’ve run across the same fallacious arguments over and over again.reproduced elsewhere, as lengthy lists of logical fallacies.  But there’s really no need for such long and detailed lists, unless you want to really nerd out on critical thinking.  For casual conversation, avoiding the top four logical fallacies will suffice.  I list them here for easy reference.

FALLACY: Consequence has nothing to do with the question of god’s existence. They are separate issues.  Human laws plus fear of retribution deter murder. Either a deity exists or it doesn’t.  Even if lack of belief in a god could be shown to result in higher murder rates, it would still have no impact on the question of existence or nonexistence of a deity.

COUNTERPOINT: Ask a believer if they became absolutely certain there was no God, if they would suddenly go on rape or murder or arson sprees? If they answer, “of course not,” then they’ve admitted that they don’t get their morality from God. If they answer “Why wouldn’t I, what would stop me?” then they’ve admitted they have no internal ethics, and their time in their religion didn’t make them a better person.

COUNTERPOINT: To our example, objectively, stem cell research can be shown to have the potential to cure millions of fully-formed and sentient adult humans at the cost of destroying a few non-self-aware cells.

EXAMPLE: “The director of Jihad Watch is a Catholic, therefore he cannot be objective about Islam.”

FALLACY: Arguments or philosophies of a given organization, or published under a given banner, need to be evaluated individually based on their merits, independent of perceived bias. Are the claims factually supported? That’s what matters, not the position of the person making them. A close corollary of “argument from authority” fallacy, is the fallacious argument from “lack of authority.” Such as “you can’t believe anything coming from Big Pharma.”

EXAMPLE: “Atheism is false, because 85% of people believe in God.”

FALLACY: Nearly 100% of people used to believe in a flat Earth.  They were all wrong.  This seems self evident, yet it’s amazing how many times the “argument from popularity” is still used.

COUNTEREXAMPLE: Democracy is effectively argument from popularity.  As we’ve seen, not only can a person win the popular vote and be wrong, they can be spectacularly wrong as we have seen with many disgraced politicians.  Government by polls leads to incredible short-term thinking and is incompatible with either long-term planning, or protection of minority rights. That’s why most democracies limit the power of their elected leaders with binding, and difficult-to-change Constitutions. Popularity is subjectivity: depending on your point of view, it can either be “the wisdom of crowds” or “mob rule.”  Historically, it has most often been the latter.

EXAMPLE: Recently, in correspondence, I quoted Karl Marx to make a point.  The respondent became emotional that I would have quoted Marx at all — ranting on about the “tens of millions of deaths” caused by Marxist philosophy.  The quote I used was: “you have nothing to lose but your chains,” referring to mental chains of subjectivity, unreason, and lack of critical thinking skills.  It was simply a metaphor.

FALLACY: Invoking a metaphor popularized by a particular individual should not imply agreement with everything else that individual said or did.  The reverse associative fallacy is the error of concluding that correlation proves causation.

EXAMPLE: The same correspondent asserted that a number of historical luminaries such as George Washington, Thomas Jefferson, Benjamin Franklin, Thomas Paine, Martin Luther King, Gandhi, and John Muir should be valued because of their religious belief.

FALLACY: As with Newton and Copernicus, religious belief was irrelevant to the achievements of these great human beings.  They lived in societies where professions of belief were required in order for them to be politically respected.  In almost all cases, the contributions we value from these luminaries fall in to the category of secular science.  Thomas Jefferson in fact, was one of the leading proponents of secular government–he was also a deist, which was as close as you could come in those days to openly declaring yourself an atheist. Jefferson rejected supernatural revelations.  Newton and Copernicus were part of creating the framework which established physical causality for events, eliminating the need to use the “divine hand” for explanation.  Though both highly religious men, Martin Luther King and Gandhi fought for principles of human equality, which were actually highly antithetical to the hierarchical structures of religion.

Anatomy of a Troll