Apparent Complexity Made Simple
LOGIN
Sunday, November 27, 2022
Top Posts
What’s Up With the Nazi “Black Sun” Rune Wheel?
The Eightfold Path of Denial of Death
Elizabeth Clare Prophet Claimed To Be ‘Clairvoyant’
Why I Left The Radical Secular Podcast
Miss R*EVOLutionaries: Panel Discussion
Money Is Not A “Shared Fiction”
Beliefs About God Won’t Make You Moral
This Is Not Fine!
Wealth Concentration Leads to Feudalism
Is Something Unclear About What’s Wrong With America?
SUBSCRIBE
Archive

No designer was needed for complex life 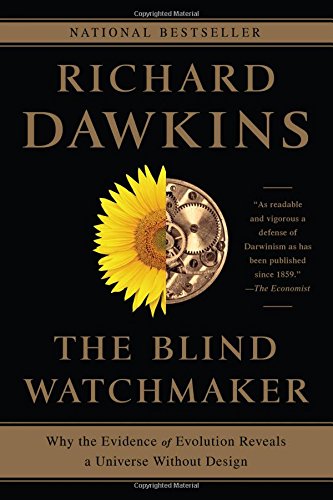 A 20th Anniversary Review of The Blind Watchmaker:

Intelligent Design seems like it should be old news. Atheists all over the world have peeled back the mask of the carefully planned ID wrapper and have found the same insidious creationist agenda festering beneath. Even many theists understand that teaching ID in public schools is unconstitutional (Judge Jones of Dover fame is himself a Lutheran).

Of course, it’d be wishful thinking to assume that ID advocates have run out of steam, though I know I had a big smile on my face the day that Jones issued his ruling. And yet, upon reflecting I’ve found myself troubled that so many people are vehemently opposed to evolutionary theory. Obviously this vehemence is largely a by-product of the creationist agenda. But since there are many religious people who are pro-Darwin, this can only be part of the story.

Recently, I discovered the other part, in the form of The Blind Watchmaker by the eminent thinker Richard Dawkins. If there’s a reason that so many people can’t wrap their heads around evolutionary theory, it’s because they’ve never heard it broken-down this effectively.

As Dawkins explains, the complexity of life is in a league of its own when compared to the inanimate matter that populates the universe. Our specialized organs are working together in constant concert to maximize our chance of survival amongst the chaos in the world. Each organ has its tissues, which have their cells, which have their organelles, which are composed of molecules, atoms, and quarks, winding down in a spiral of fantastic organization and complexity. And we’re only one species amongst a multitude.

So, if we’re going to try and explain this complexity, Dawkins notes, our theory has to treat it in such a way as to make it reasonably probable to have occurred within the lifespan of our universe–otherwise it’s not a very good theory. He takes us through the problems the theory must resolve, and consistently points out how natural selection is the best one for the job, a case made irrefutable an emphasis on cumulative selection (miniscule changes building up over grand geological periods), which reduces the improbability factor to almost zero. And on top of that, each chapter contains a treasure trove of interesting facts.

For instance, almost an entire chapter is devoted to a detailed explanation of how bats use sonar to gather spatial information from their environments (allowing them to efficiently maneuver throughout the world and track prey despite their poor visual acuity). Then, to give us an understanding of evolutionary space (an important concept that helps us to better understand the difference between probable and improbable mutations), he presents an overview of his ‘biomorph’ recursion program which simulates a simplified evolutionary space (it’s only 9-dimensional!). And that’s just the tip, which we discover as he takes us through such topics as evolutionary convergence, species vs. species arms races, different methods of taxonomy, punctuated equilibrium, Lamarckism, and so forth.

Throughout the book we come to understand that Dawkins is thoroughly interested in the truth and nothing but, and hence the reason why he is such a revered and reviled thinker.