U.S. EPA Killed the Hybrid Car in 1972
LOGIN
Sunday, December 4, 2022
Top Posts
What’s Up With the Nazi “Black Sun” Rune Wheel?
Elizabeth Clare Prophet Claimed To Be ‘Clairvoyant’
The Eightfold Path of Denial of Death
Why I Left The Radical Secular Podcast
Miss R*EVOLutionaries: Panel Discussion
Money Is Not A “Shared Fiction”
Beliefs About God Won’t Make You Moral
This Is Not Fine!
Wealth Concentration Leads to Feudalism
Is Something Unclear About What’s Wrong With America?
SUBSCRIBE
Archive

Toyota brought it back 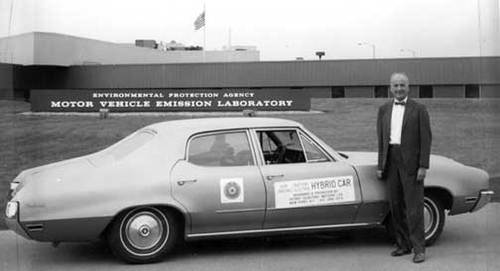 Victor Wouk built a working hybrid car with low emissions in 1972. It was killed by the so-called Environmental Protection Agency. They had promised to buy 350 of the cars if they met performance specifications. Once the car passed their tests, they reneged on the deal. This was just one year before the 1973 Arab Oil Embargo, and right at the peak of U.S. oil production. This would have been the perfect catalyst to begin to reduce U.S. oil consumption, and keep it in line with falling production. The entire American entanglement with, and dependence on, the Middle East could have been avoided. GM, Ford, and Chrysler would most likely have been the ones leading the charge with the best technology, instead of Toyota and Honda. Instead, the U.S. has spent the 35 years since, perfecting the “art” of building gas-guzzling, pollutant-spewing road-mastodons.

Read his obituary, and weep.

Can ‘Human Nature’ Ever Justify Behavior?

Peak Oil is Probably Here, but the “Peak-Oil Movement” is Just Another Cult

The US was also the first to have bullet trains, jet trains, tilting trains, and other technology of the sort.

The FRA by regulation in effect made it impossible to develop and cost effectively run these trains in the United States.

The Government has created more backwards movements to individual’s attempts at forward progress than any single entity since the organized religions of the world.

it’s been awhile. I like to check what you got goon’ every once in awhile.

interestingly enough, according to the new connexion (a new age, hippy paper but has good environmental articles), in 1874 Wesley Gary invented the first “fuel-free magnetic motor”.

and Hans coler also did in 1925, that created 6,000 volts out of a magnetic motor. At the time seemed out of nowhere, magical energy. but the real kick, it had no moving parts.

Both seemed to be covered up rather quickly. Its a shame.

More proof that coercive laws and monopolistic government agencies are not the answer to more responsible living.

Only natural consumer demand and an unrestricted market have any hope of helping fix this problem.

The good news today at least is that hybrid and electric cars are quickly becoming competitive with their pure-gasoline cousins, and people are responding with their wallets. The Prius and hybrid Civic are hot sellers right now, and Ethanol E85-capable cars are getting more consumer attention as well.

For another shining example of governments ability to destroy the ecosystem while claiming to act in its interests, check out this blog entry by Stefan Molyneux:

So Sean, after realizing this are you still a statist ? ;)

Good point. I think trains would be a great way to reduce energy consumption/oil dependence. Have you ever thought about how to solve the problem of transportation once you get to your destination (other than rental cars?) Also, what about people who want to transport large amounts of cargo as they travel: family vacationers, mountaineers, touring musicians, etc. Giving these groups an alternative to vans and SUV’s would be a great step forward.

Welcome back and thanks for checking in. While some legitimate inventions have been covered up, an equal number of flim-flam artists have also plied their trade. Most of these so-called magic inventions were Perpetual Motion Machines, and/or violated one or more of the laws of Thermodynamics. But you are right that many promising technologies have been prevented from coming to their full fruition. Usually this has been through government subsidies of bad technology, namely oil. If consumers had to pay the true costs of fossil fuels, they would see what a bargain green-tech really is.

More and more I’m agreeing that government is not the solution. But somehow we’ve got to figure out how to create a mechanism for dealing with “collective interests” that doesn’t have the down side of government.

By the way, have you looked for an E85 station in LA? They don’t exist yet. The closest ones are over 100 miles away. (San Diego and Fresno I think)

We’ve had this discussion, I’m not a statist, but I’m not an anarchist either.