James Hansen Sounds Alarm on Sea Level Rise
LOGIN
Sunday, November 27, 2022
Top Posts
What’s Up With the Nazi “Black Sun” Rune Wheel?
The Eightfold Path of Denial of Death
Elizabeth Clare Prophet Claimed To Be ‘Clairvoyant’
Why I Left The Radical Secular Podcast
Miss R*EVOLutionaries: Panel Discussion
Money Is Not A “Shared Fiction”
Beliefs About God Won’t Make You Moral
This Is Not Fine!
Wealth Concentration Leads to Feudalism
Is Something Unclear About What’s Wrong With America?
SUBSCRIBE
Archive

It's difficult to overstate the danger 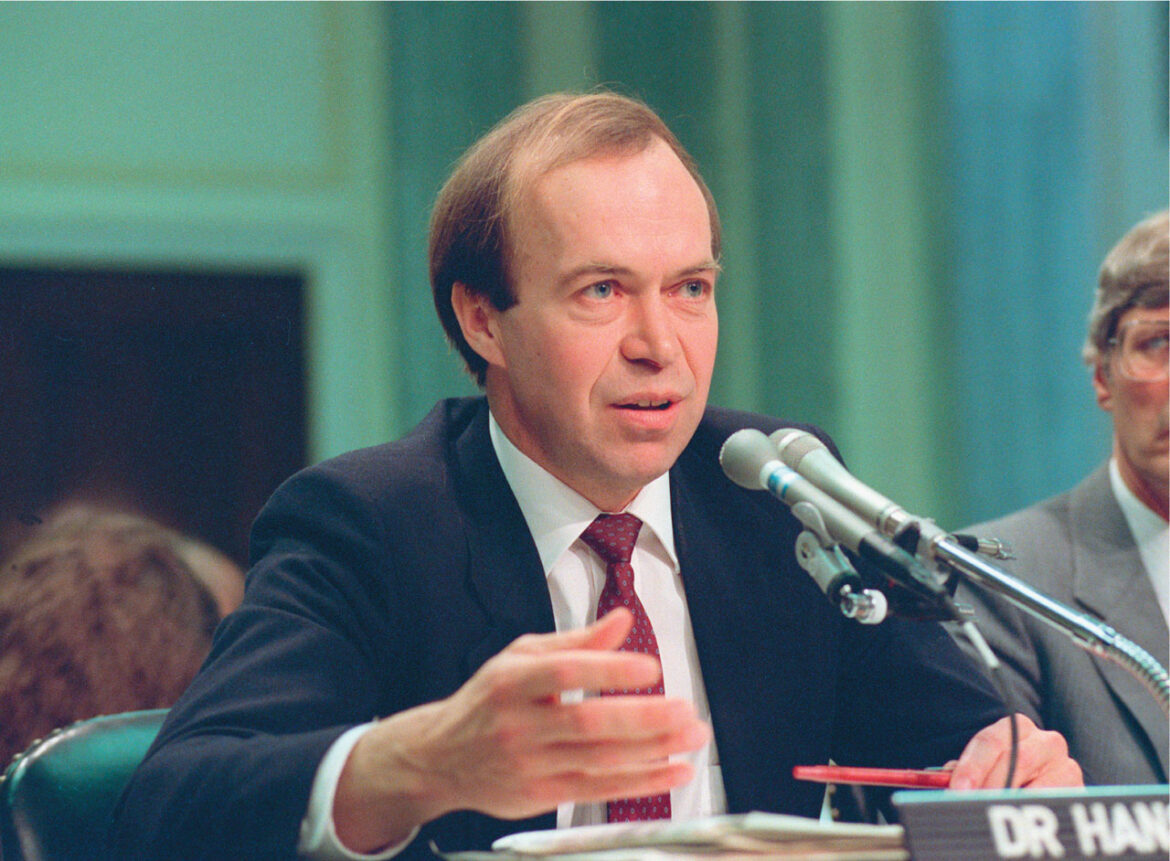 Jim Hansen, NASA climate scientist, is saying we don’t have much time to cut carbon emissions.We’re not talking some abstract warming scenario, but SEVERE COASTAL INUNDATION WORLDWIDE. Headlined on the Drudge Report, I’m not going to make any waves posting here. But I’ve got to comment. First, some VERY ALARMING text from the report:

A satellite study of the Greenland ice cap shows that it is melting far faster than scientists had feared – twice as much ice is going into the sea as it was five years ago. The implications for rising sea levels – and climate change – could be dramatic…..

How fast can this go? Right now, I think our best measure is what happened in the past. We know that, for instance, 14,000 years ago sea levels rose by 20m in 400 years – that is five metres in a century. This was towards the end of the last ice age, so there was more ice around. But, on the other hand, temperatures were not warming as fast as today.

5 meters is close to 16 feet. Check your coastal topographic maps to see what could be lost. Or this site from the EPA, which looks at much less drastic change.

How far can it go? The last time the world was three degrees warmer than today – which is what we expect later this century – sea levels were 25m higher. So that is what we can look forward to if we don’t act soon. None of the current climate and ice models predict this. But I prefer the evidence from the Earth’s history and my own eyes. I think sea-level rise is going to be the big issue soon, more even than warming itself.

For all you metrically challenged out there, 25 meters is around 80 feet higher!

So…are we ready to lose some of the most valuable real estate worldwide: ports, cities, and low lying islands? This is what we’re in for if we don’t stop burning carbon or figure out a way to sequester the CO2. It will be interesting to watch the talking heads blather helplessly about this as it happens, when they were all warned for decades by scientists.

To George W. Bush, who will have wasted 8 of the precious years we had to prevent this scenario, and whose press team tried to silence Jim Hansen as he spoke, I say: If you’re not going to listen to your own NASA scientists about literally the MOST IMPORTANT ISSUE IN THE WORLD, what the FUCK are you paying them for?????

Your assumption that human carbon emissions are a major influence on climate is not supported even by the Kyoto Treaty.

Not my assumption. Talk to NASA, or look at the evidence. This is not even controversial anymore. Evidently, we’ll all have to learn this the hard way.

I think that I am with BlackSun on this one at least as far as data supporting rising ocean levels. Ive seen quite a few shows about this on Discovery, Science Channel, etc… as well as seen some historical graphs about temperature and ocean levels dating back over 100K years (thanx to ice core samples from antarctica and other scientific research).

But I am not all that worried. I mean, sure there will be some tangible consequences, but you must realize that as soon as this issue starts hitting governments and companies in the WALLETS, they will quickly change their ways.

Imagine what incredible changes the companies and governments would make (and how quickly they would make them) if ports and coastal cities started flooding with seawater.

Sometimes it takes a little kick in the butt from reality for humans to fix their mistakes. And right now we are at the stage where the foot is cocked, but it hasnt kicked us in the butt quite yet.

Sorry Blacksun… you’ve been had by the politicos. No shame on that, it’s happened to all of us, but I would have to ask YOU to look at the evidence.

And the reason why you’ve been had is this : the Kyoto Treaty – which is pretty much made up with Greenie and political lobbies – states that its full implementation would lower global temperatures by 0.07 Â°C by the year 2050, with an OPTIMISTIC ESTIMATE of costs of 150 billion dollars a year.

No Sean, I’m afraid the propaganda from your own side itself proves that you’ve been made the fool.

I’m nobody’s fool. How can you pretend to support science, and then deny what science is saying about the climate?? Or are you saying that science is only right sometimes, or when scientists support only your particular political agenda du jour??

Do you really support the Bush administration’s efforts to suppress it’s own climate scientists?

Come on, Francois, it’s not like I’m the only one saying this. The evidence is overwhelming. There’s way too much denial going on. This problem will have to be dealt with, and soon. Proper solutions will grow the economy AND cut carbon. England has reduced their C02 output 13 percent while growing their economy 40%.

We know how the story ends, if we keep increasing CO2 concentration. The CO2 laden atmosphere of Venus causes surface temperatures of about 700 degrees Celsius. While no one is saying that we could see Venus-like temperatures on Earth, there is widespread agreement that even the small projected rise of a few degrees Celsius is expected to trigger massive melting of the Greenland and Arctic ice sheets. (Not to mention melting of the Siberian Permafrost). Already in the past 5 years, there has been a DOUBLING of the annual ice melt in Greenland. This is extremely serious, and when such exponential rises in the annual melt pass a tipping point, there will be no way to stop them. Such massive freshwater melts also threaten to disrupt ocean currents, and have the potential to put much of Europe into a deep freeze–at the very least disrupting agriculture on a massive scale.

The ice sheets in Greenland and Antarctica are among the largest reservoirs of fresh water on Earth, and their fate is expected to be a major factor in determining how much the oceans will rise. Rignot and University of Kansas scientist Pannir Kanagaratnam, who published their findings yesterday in the journal Science, declined to guess how much the faster melting would raise sea levels but said current estimates of around 20 inches over the next century are probably too low.

While sea-level increases of a few feet may not sound like very much, they could have profound consequences on flood-prone countries such as Bangladesh and trigger severe weather around the world.

“The implications are global,” said Julian Dowdeswell, a glacier expert at the University of Cambridge in England who reviewed the new paper for Science. “We are not talking about walking along the sea front on a nice summer day, we are talking of the worst storm settings, the biggest storm surges . . . you are upping the probability major storms will take place.”

The study also highlights how seemingly small changes in temperature can have extensive effects. Where glaciers in Greenland were once traveling around four miles per year, they are now moving twice as fast. While it is possible that increased precipitation in northern Greenland is somehow compensating for the melting in the south, the scientists said that is unlikely.

There are multiple ways warming might be causing glaciers to accelerate. The scientists said increased temperatures may loosen the grip that glaciers have on underlying bedrock, or melt away floating shelves along the shore that can hold ice in place.

Whatever the mechanism, the phenomenon seems widespread. At a news conference organized by the American Association for the Advancement of Science at its annual meeting in St. Louis, glacier scientists Vladimir Aizen from the University of Idaho and Gino Casassa of Chile’s Centro de Estudios Cientificos said they were seeing the same thing happen to glaciers in the Himalayas and South America.

“Glaciers have retreated systematically and in an accelerated fashion in the last few decades,” Casassa said. One glacier that provided Bolivia with its only ski slope five years ago has splintered into three and cannot be used for skiing, the scientist added.

Rapid melting of Himalayan glaciers also raises concerns for the large portion of humankind that gets its fresh water from glacier-fed rivers in South Asia, Aizen noted.

Most climate scientists believe a major cause for Earth’s warming climate is increased emissions of greenhouse gases as a result of burning fossil fuels, largely in the United States and other wealthy, industrialized nations such as those of western Europe but increasingly in rapidly developing nations such as China and India as well. Carbon dioxide and several other gases trap the sun’s heat and raise atmospheric temperature.

“This study underscores the need to take swift, meaningful actions at home and abroad to address climate change,” said Vicki Arroyo, director of policy analysis at the Pew Center on Global Climate Change.

The data highlight the lack of meaningful U.S. policy, she added: “This is the kind of study that should make people stay awake at night wondering what we’re doing to the climate, how we’re shaping the planet for future generations and, especially, what we can do about it.”
______________________________

And another from ABC news:

Also, Francois, I’m really shocked that you are using “argument from result.” Basically, you are saying that because the issue of climate change has been traditionally a “green” issue, it can’t be valid.

How much of the ice caps would have to be gone before it would become a “libertarian” issue? 2/3? Would it become an “anarchist issue” if the entire ice cap melted, and there was a 20 meter global rise in sea levels? I’m not trying to be insulting, (you DID call me a fool), but what you are saying makes absolutely no sense in the face of a great deal of startling and overwhelming evidence.

Here’s another link, with further detail from respected scientists pointing to the same conclusions that you mention BlackSun.