George Bush: Put Your Money Where Your Mouth Is
LOGIN
Sunday, December 4, 2022
Top Posts
What’s Up With the Nazi “Black Sun” Rune Wheel?
Elizabeth Clare Prophet Claimed To Be ‘Clairvoyant’
The Eightfold Path of Denial of Death
Why I Left The Radical Secular Podcast
Miss R*EVOLutionaries: Panel Discussion
Money Is Not A “Shared Fiction”
Beliefs About God Won’t Make You Moral
This Is Not Fine!
Wealth Concentration Leads to Feudalism
Is Something Unclear About What’s Wrong With America?
SUBSCRIBE
Archive

Home Climate George Bush: Put Your Money Where Your Mouth Is

George Bush: Put Your Money Where Your Mouth Is

Is he serious about cutting oil dependence? 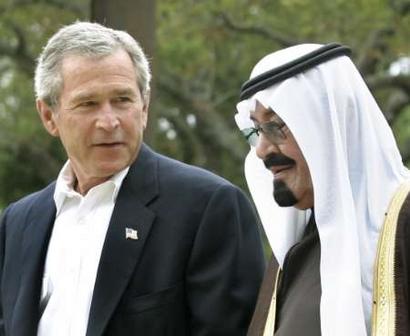 OK George W. Bush, you’ve said something that I’ve been calling for for the past 5 years.You want to cut oil dependence. That’s like a Columbian drug lord saying he wants you to quit doing blow, but OK. Let’s see you do it. You’ve got 3 years. Do you have the balls to phase in a serious feebate program, and to penalize those who drive giant SUV’s??

I doubt it. I think you’re just posturing. But I’d like to be proven wrong.

It’s as American as apple pie to want to drive our large cars on our large best-in-the-world roads. And why shouldn’t we? I’ve dreamed of cruising this great country of ours in a class-A motorhome someday. I used to own a king-size 30 ft. trailer that put a strain on the biggest tow vehicles. I know about the pleasures of the open road and the enjoyment of America’s great parks and campsites. It’s a valuable part of our way of life. And we can have it without guilt. But not just yet….

Not while gas is $2.75/gallon. Last year’s $3.50/gallon gasoline was just about the best thing that could have happened to America. People hate the idea, but high prices discourage consumption and encourage research into alternatives. And alternatives there are. Fuel cells and hydrogen, or perhaps batteries, are the key to guilt-free rolling living rooms for our retirement and the next generation. Biofuels, namely cellulosic ethanol, biodiesel, and other biomass, coal to liquids, solar zinc…the list is endless…take time and money to develop, time we might not have if we don’t get started. But not with the Bush/Cheney administration in the White House. This team has always preached the gospel of big oil, and now we’re paying the price. Actor Robert Redford has recently penned a compelling missive on the subject.

The hydrogen economy, or plug-in hybrid vehicles, using advanced battery technology and ultracapacitors, offers vast promise and a limitless supply of what is essentially stored solar energy. In the case of plug-in hybrids, the power comes from unused grid capacity at night.

But it won’t happen unless we are willing to postpone our gratification and our love affair with palaces on wheels for a few more years. We’ve just seen the costs of our oil dependence escalate beyond our worst nightmares. Would we pay $3.00 a gallon, or how about $6.00 a gallon to save a major American city? To have the twin towers and thousands of dead Americans back with us? I would in a heartbeat. When you look at the total cost of driving, including taxes, insurance, capital cost of the vehicle, the price of gas is only about 20% of the cost of driving. So even if the price of gas were to double, the cost of driving for the average family would only go up 10-20%. America’s oil dependence prevents us from taking a stand against the radicals in Saudi Arabia, and corrupt governments elsewhere in the region. Even as our soldiers fight the terror war, our oil money goes to Islamic religious schools training the next generation of screaming American-haters.

Forget the lame too-little-too-late tactic of freezing terrorist assets. Freeze their whole way of life by weaning ourselves from the oil! If we continue with our profligate insane love affair with cheap Middle Eastern oil, we may sacrifice more buildings, more people, and even an entire city to nuclear or bio-terror before it’s over. The very least that will happen is environmental devastation as CO2 increases and warms our planet beyond recognition. We’ve got to call a halt to this NOW. This is perhaps the most important public policy issue we face today, and we’ve just been given a new incentive to act. We should endorse the Kyoto protocols on global warming and start to take this seriously. The libertarian in me hates this idea, but if market forces won’t mandate a change, how about a gradually phased in $1.00 a gallon alternative energy tax to go directly to construction of a self-sufficient American hydrogen economy? The price will jump anyway in a few years as supplies tighten. So let’s get ahead of the curve, and help set the Islamic world straight at the same time. This is serious, folks. It’s a matter of life and death, national security, and worldwide importance.

We could structure fuel taxes as efficiency-promoting feebates, where people driving inefficient vehicles pay a high fuel tax, something like $2.00/gallon, while those driving efficient vehicles would get a rebate. It’s revenue neutral, and just encourages conservation. The system should be structured so that lower-income people get money back no matter what, to offset the tax. There would also be a partial exemption for commercial vehicles–only if they were actually commercial. But even those would get a credit for phasing in efficient technology. The tax would be only on autos and trucks, and apply only to gasoline produced from crude oil. A lesser tax would apply to petroleum synfuels, and biofuels would be exempted altogether. This would cause skyrocketing demand for biofuels.

Imagine how much freer an American president would be dealing with rogue regimes like Iran and Venezuela, if we needed absolutely no oil from them.

Note: Since I wrote this, the prospects for hydrogen and biofuels in the transportation sector have dimmed significantly, in favor of electric vehicles. Still, the potential for the use of hydrogen to store energy from unused wind and solar generation capacity remains strong. –Sean Prophet, August 2022