Energy Prices are an Obscene Bargain
LOGIN
Sunday, November 27, 2022
Top Posts
What’s Up With the Nazi “Black Sun” Rune Wheel?
The Eightfold Path of Denial of Death
Elizabeth Clare Prophet Claimed To Be ‘Clairvoyant’
Why I Left The Radical Secular Podcast
Miss R*EVOLutionaries: Panel Discussion
Money Is Not A “Shared Fiction”
Beliefs About God Won’t Make You Moral
This Is Not Fine!
Wealth Concentration Leads to Feudalism
Is Something Unclear About What’s Wrong With America?
SUBSCRIBE
Archive 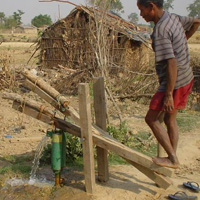 A simple consideration of the energy content of a barrel of crude oil can show us what a tremendous bargain it is even at current near-record prices. We take this bargain for granted, and at least in the U.S., most consider the benefits of oil a birthright. We should at least pause and consider the following:

A barrel of crude oil contains 5,930,226,101 joules of energy. A joule is one watt for one second. Therefore, this would be enough energy to light a hundred watt light bulb 24 hours a day for nearly two years (686 days). The maximum sustained output of a human being doing heavy manual labor is also about a hundred watts. But we don’t work 24/7, and we don’t work on weekends. At 8 hours a day, it would take a human 2059 work days to expend as much energy as is contained in one barrel of oil! This doesn’t count the work it would take to produce the prodigious quantities of food such a person would eat–but let’s ignore that for now.

The treadle pump above, for example, used in countries where oil-fired pumps are not affordable, probably requires the expenditure of even less than 100 watts of human energy.

To get some perspective, consider that a person works 48 weeks per year. This allows for 2 weeks vacation, and 10 sick/personal days. This is a total of 240 work days per year.

At this rate, it would take a human being 8.6 years of backbreaking labor to equal ONE BARREL OF OIL!

This is absolutely shocking. It seems counterintuitive. Do the math yourself and you will never think about energy the same way again.

Now the hard manual labor we are talking about could only be accomplished by the young and able-bodied. And it would be hard to argue that a person could keep up this kind of output for very long. Under the best of circumstances, a person might last 25 years. This is the energy equivalent of 3 barrels of oil. So in human energy terms, a very fit person’s life is worth 3 barrels of oil.

OK, I admit that this is a bit of a stretch, since we are worth a lot more than our manual labor (Karl Marx might disagree). But let’s look at this in terms of wages, to see what the energy in a barrel of oil would cost if provided by human labor. This might give some perspective on history, when much of the work was done by slaves. Let’s start by assuming a slave wage of–say–11 cents an hour. Last time I checked, this is what prisoners in the U.S. are paid for prison work. At this rate, the cost of a barrel of oil is $1,812. If that seems way out of line, consider that in today’s dollars, the cost of a barrel of whale oil (the world’s last widely-used pre-petroleum liquid energy source) at its peak price was $924. This is taken as $22 * 42 gallons.

Something to think about the next time you fill your tank with dirt cheap $3 a gallon gasoline.

How much are we willing to pay for such energy?

Though energy has traditionally represented only a few percent of GDP, it’s the essential ingredient that makes all the rest possible. The easy availability of oil (and other fossil fuels) has blinded many of us to its importance. But it’s now become the heroin addiction of modern civilization.

At this point, we’d pay whatever we had to. Lack of oil would lead to economic collapse and mass starvation. But at some level (perhaps 5% total GDP) it becomes prohibitive, and the market will demand (and get) real and renewable alternatives with a collective scream.

That scream is now beginning to build its fury from the bottom of our lungs. I hope it will severely rattle the halls of global petro-power. Consumers have been lining up like sheep for years, blissfully ignorant of the corner they were painting themselves into with their appetites. The bastards who’ve been pushing this dependence will unfortunately be getting much richer before this is over. But over it will be, and much about our future depends on how this transition is accomplished.

I just found your article after discussing the link between the discovery of oil and the end of slavery in the U.S. at blackEnergy’s blog. I’m amazed at the general lack of understanding of economics, especially around something as fundamental as energy. I include myself among the ignorant, but at least I know how little I know! Thanks for being a resource on this issue.

The use of fossil fuels such as petroleum can have a negative impact on Earth's biosphere, releasing pollutants and greenhouse gases into the air and damaging ecosystems through events such as oil spills.