Forward and Backward on Theocracy
LOGIN
Monday, December 5, 2022
Top Posts
What’s Up With the Nazi “Black Sun” Rune Wheel?
Elizabeth Clare Prophet Claimed To Be ‘Clairvoyant’
The Eightfold Path of Denial of Death
Why I Left The Radical Secular Podcast
Miss R*EVOLutionaries: Panel Discussion
Money Is Not A “Shared Fiction”
Beliefs About God Won’t Make You Moral
This Is Not Fine!
Wealth Concentration Leads to Feudalism
Is Something Unclear About What’s Wrong With America?
SUBSCRIBE
Archive 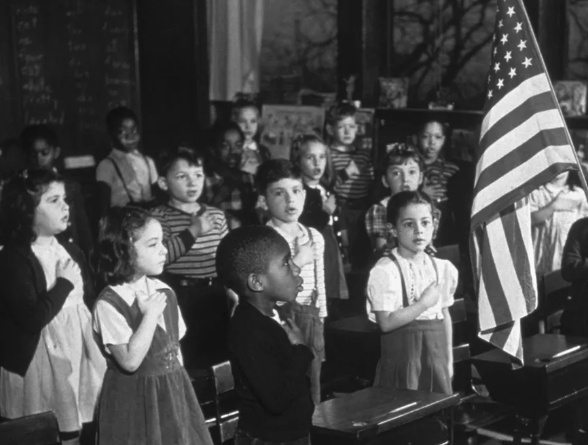 The Drudge Report trumpeted on 9.14.05 the headline “unconstitutional” showing a picture of young children saluting a flag. What is at issue are the words “under god” in the pledge of allegiance. Some time ago, an atheist named Michael Newdow sued Sacramento to prevent his child, and others who did not believe, from being forced by the school to recite what is essentially a prayer.

U.S. District Judge Lawrence Karlton ruled that the pledge’s reference to one nation “under God” violates school children’s right to be “free from a coercive requirement to affirm God.”

Karlton said he was bound by precedent of the 9th U.S. Circuit Court of Appeals, which in 2002 ruled that the pledge is unconstitutional when recited in public schools.

Though it may not survive subsequent challenges, this ruling is great news.

Religious moderates will cry out in horror, believing that such pledge recitations in schools certainly do no harm. But I disagree. Those who founded our nation had fled religious persecution and state religions. They knew only too well the trouble that could be caused when governments got involved in forcing people to believe a certain way. Many of the founders were themselves religious, but they still had the wisdom to see that spirituality was a private matter and the great nation they were founding should remain agnostic, at least officially.

This one statement prohibits all sorts of mischief.

Like abstinence-only sex-education programs, which, through limitation of access to condoms, can cause death. Or stacking presidential science panels with creationists, and on and on…

Of course the U.S. drift toward religious governance is nothing compared to the harsh realities in the Islamic world. That’s not news. But what should be realized is that democracy itself is incompatible with state religion. Atavistic superstitions and beliefs conflict with even the most basic democratic notions, such as the equality of women. We cannot have it both ways.

Getting the pledge out of the classroom should not be the solution. Just remove the words “under God,” and there is no constitutional problem. The 1954 congressional action inserting them could never have succeeded except as feel-good cold-war jingoism against “godless” communism.

If this remarkable and unlikely ruling stands, religious parents can teach their children to recite the pledge with the offending words anyway if they choose. Or, even better, they can use this opportunity to provide their kids with a civics and history lesson about separation of church and state.

Note: Since 2005, we’ve seen a horrific retrenchment into theocracy, and open embrace of prayer in schools by the Supreme Court in 2022, in Kennedy v. Bremerton School District. All the work that’s been done over many decades by secular organizations on this issue is coming unraveled. American public schools now face a new onslaught of Christian activism. –Sean Prophet, August 2022