Winning The Energy Transition
LOGIN
Monday, December 5, 2022
Top Posts
What’s Up With the Nazi “Black Sun” Rune Wheel?
Elizabeth Clare Prophet Claimed To Be ‘Clairvoyant’
The Eightfold Path of Denial of Death
Why I Left The Radical Secular Podcast
Miss R*EVOLutionaries: Panel Discussion
Money Is Not A “Shared Fiction”
Beliefs About God Won’t Make You Moral
This Is Not Fine!
Wealth Concentration Leads to Feudalism
Is Something Unclear About What’s Wrong With America?
SUBSCRIBE
Archive 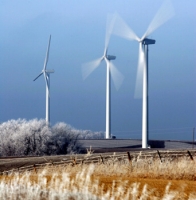 Note: This was an announcement of my short-lived attempt at starting a separate energy blog. Like many failed internet projects from the 2000s, it is no more. –Sean Prophet, August 2022

Over the past few months, I’ve been compiling links and information related to the coming world energy transition. The world is waking up to the fact that it cannot continue on with business as usual. The recent oil price runup, coupled with the vulnerabilities to supply disruption spotlighted by hurricane Katrina, makes this a certainty.

My current interest in this phenomenon was sparked by an author with whom I very much disagree. James Howard Kunstler’s “The Long Emergency” sent me on a journey of research and soul-searching. My first reaction to his book was extremely negative. But the more research I did, the more I found that the first part of his thesis is correct–namely that we are nearing the peak of world oil production. There are few analysts (aside from Daniel Yergin) who will say otherwise.

The second part of Kunstler’s book, in which he predicts unmitigated disaster, is deeply flawed. Human desire and creativity will be the energy source for the future. They, along with the sun’s vast output, will power an ever-improving future so long as thinking beings walk this earth.

It is to that end that I have put together the energy transition links page. It was originally called the “peak oil” page, but that term has a “doom and gloom” ring to it. There’s an oil peak alright, but the world is already mobilizing to mitigate it. While many see this reduction in oil supply as an inevitable driver for war and global economic recession, I disagree. The Iraq war (near debacle at this point) proves that US imperial might cannot ensure prosperity–so long as it involves shipping oil from vulnerable facilities halfway around the world. Hurricane Katrina proves that so long as we depend on oil, we face disruption even in our own backyard!

The era of oil is finished. The twenty-first century is the era of sustainability and energy transition. The oil we burn each year took a million years to form. We are living on our planetary inheritance. Like a drunken trust-fund brat, we are now getting our asses kicked. The pain will only get worse until we establish and begin to live on our current energy income. This can only happen through sustainable and renewable energy sources.

Many former government security-policy hawks, such as George Schultz and James Woolsey are now lending their support to domestic projects that increase US energy independence. Schultz wrote the foreword for a study on future transportation called “Winning the oil Endgame,” and Woolsey is on the National Energy Policy Commission, which recently ran a simulation of an oil disruption.

The world’s oil addiction can and will be broken. Plentiful fossil-fuels still exist to get us through the transition (tar sands, oil shale, Fischer-Tropp coal gasification, thermal depolymerization, etc.). However the recent demand-driven price runup will make their use less and less attractive. As many peak oilers are fond of repeating: “Markets don’t create oil.” But they do create initiative. The main irreplacable use for oil is in transportation. Electric and plug-in hybrid technology can get us through until cars are running on solar-hydrogen or solar-zinc or whatever. Air travel is another story, and we will see that getting a lot more rare and expensive in the coming decades. I would argue for a national high-speed electric rail system. This could be an affordable substitute for air travel. Electronic co-location and virtual conferencing (shipping data instead of people and objects), could in turn reduce the demand to be physically present.

Nothing rankles me more than energy ignorance and energy waste. And Americans are king in both categories–because we can–or rather could. From arrogant, bloated SUV’s, to petro/agribusiness to massive energy-wasting tract homes, our sense of energy entitlement borders on the obscene. I’ve contemplated putting my visual communication skills to use to make a documentary expose about the subject. At present, the world’s energy woes make that irrelevant. The wakeup call is already coming at the gas pump and on the evening news. Nothing kicks Americans in the teeth like high energy prices. But Americans don’t stay down. We know how to fix problems when we put our minds to it. In time, depending on how severe energy disruptions get, it may still be useful to make a documentary, to help inform the transition. The subject is incredibly complex yet pervades our lives.

In the meantime, please enjoy the energy transition page.

Hey Shawn – loving your blog. Quick question: Can I link to this site on my band’s web page. Warning – a lot of whackos will start reading your stuff. But I thought I’d share the love …umgh .. whackos with you! Peace. –Rory