Do What Thou Wilt
LOGIN
Monday, December 5, 2022
Top Posts
What’s Up With the Nazi “Black Sun” Rune Wheel?
Elizabeth Clare Prophet Claimed To Be ‘Clairvoyant’
The Eightfold Path of Denial of Death
Why I Left The Radical Secular Podcast
Miss R*EVOLutionaries: Panel Discussion
Money Is Not A “Shared Fiction”
Beliefs About God Won’t Make You Moral
This Is Not Fine!
Wealth Concentration Leads to Feudalism
Is Something Unclear About What’s Wrong With America?
SUBSCRIBE
Archive

Home Atheism Do What Thou Wilt

Do What Thou Wilt 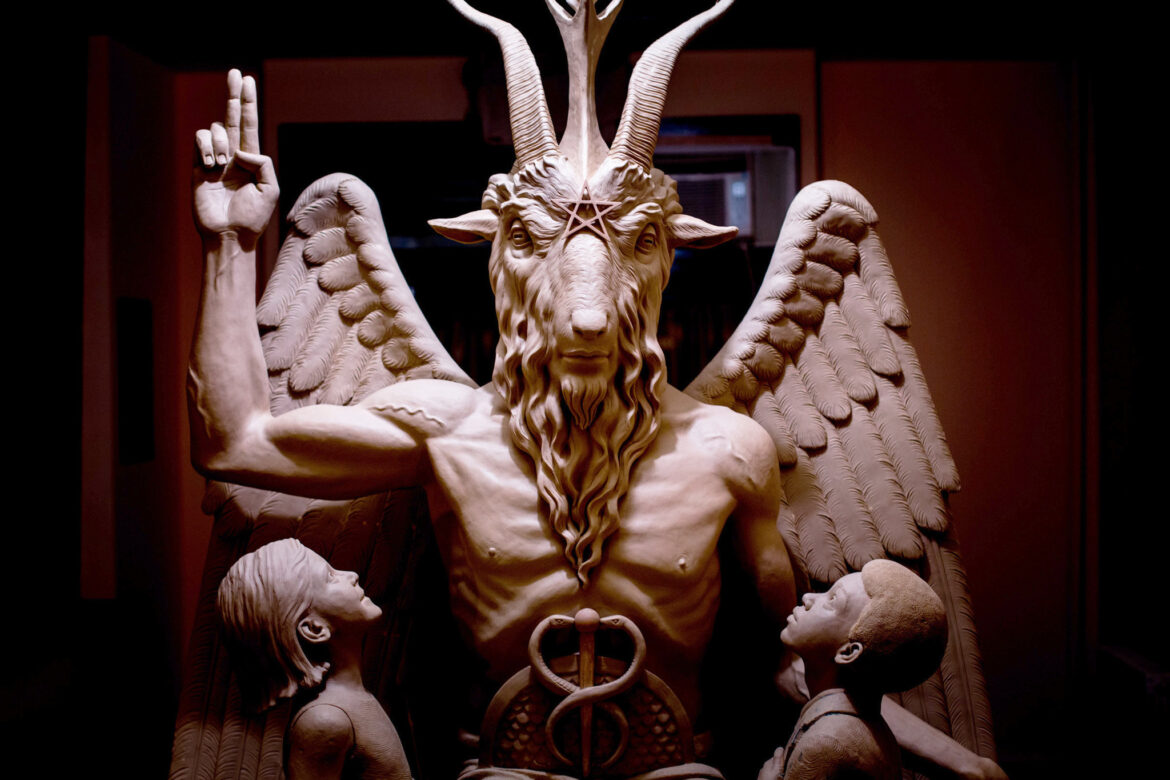 “Do What Thou Wilt” has been attributed to Aleister Crowley, and other so-called devil worshippers. But it seems more relevant today than ever to the liberated individualist. I’ve taken flak from some readers recently for publishing the words of Trent Reznor:

God is dead, and no one cares. If there is a hell, I’ll see you there.

I published them because I believe them. Words to live by. More carnage has been committed in the name of ‘god’ than any other cause, except possibly communism (the ultimate secular religion). The devil and “demon possession” have been used to explain away numerous crimes that were actually the result of plain old human nature.

The very concept of ‘hell’ is as twisted as the concept of heaven. But actually, they both served a very effective purpose–a ruse used to scare people into behaving a certain way before governments had the technology for effective physical law enforcement. (The early church was often as powerful or more so than the government–hence our modern concept of the separation of church and state.) The results were reflected in the crusades, the inquisition, witch trials, and more. The psychic impact has far outlived the original purpose.

Religion was the horror show of the middle ages–the lurid prose of Dante, the rantings of endless preachers and ne’er do wells. The insidious seeds of this cancerous ideology sprouted in the collective psyche in ways that prosper today. A suffering population struggling to awaken from darkness was somehow convinced by its leadership that its ‘sins’ were to blame for the problems. What a brilliant diversionary tactic they employed to distract from their corrupt, despotic, and decadent regimes. All that fear and trembling people swallowed for centuries has been turned outward into anger and self-perpetuating mechanisms of control, that still seek to enslave mankind.

The horror show today is not in the theater. It’s in the streets and on the internet, where beheadings and ambushes and bombings abound. It’s in the attempts to establish shariah in numerous countries (including the family courts of Canada!) Today’s fire and brimstone preachers are more likely to be Muslim than Christian, though both have their vice police and suicide squads. (Hint: it’s not Islamic terrorists who bomb abortion clinics.)

Today’s hate-mongers are more likely to fulminate on a blog than from a pulpit. But it’s the same message: Our souls are at stake and our lives do not belong to us. They belong to a faceless god who is full of wrath. Our bodies are a source of shame, (But he loves us.) Living for our own pleasure and profit is a sin. Blasphemy is a crime equivalent to murder. Our own human fulfilment in this life doesn’t matter, because it is the unseen afterlife that is really important. (72 virgins await the suicide bomber…)

I’ve been harassed lately by former members of my parents’ church, who can’t seem to accept I resigned from their church 11 years ago. Living for oneself is the ultimate crime to these fanatics. They live in their own self-created hell of prohibition and fear. Exercising freedom of speech is evidence of demon possession (if one questions their twisted logic.) Evidently to them, freedom of religion doesn’t include freedom FROM religion. What exactly did they celebrate on July 4??

For them, as well as my friends and free-thinkers, I offer the following points:

If the afterlife does exist, and an angry god lives there, then I will send him my everlasting contempt and say to him in the tradition of the Native Americans, “It is a good day to die.” As John Lennon said “God is a concept by which we measure our pain.” For those who’ve still got the morphine syringe of religious belief jammed in their arms, I’ll offer the following advice from John Milton: “Better to reign in hell than serve in heaven” ….. Amen

God is dead and no one cares
If there is a hell, I’ll see you there

He flexed his muscles to keep his flock of sheep in line
He made a virus that would kill off all the swine
His perfect kingdom of killing, suffering and pain
Demands devotion atrocities done in his name

Islamic Leaders Must Be Held Responsible

The Question of Sentience

I agree that the horrors of religion and fundamentalism have caused many of the worlds problems, however, I do believe there are individuals of a religious, mystical, occult, or magickal temperament who do not believe in imposing their views on others. It is interesting that you quote Crowley who was a very brilliant but conflicted individual. If you read Crowley’s Liber OZ and his views on the rights of man he states “there is no god but Man.” Crowley, on the one hand, was a fervent believer in the individual and opposed the tyranny of the majority over the minority. On the other hand, the cult he founded (OTO) has a long history of forced obedience, egoic power struggles, and all manner of collusion. I am not convinved it is the irrational (metaphysics, occult world view, mysticism, religion) that is the problem- as you stated in your article the secular cult of communism has killed untold millions- it is the mindless group collective, fanaticism, hatred of the individual, hatred of diversity that causes problems.

“Love is the Law, Love under Will”

Believe me. I have been to hell (Realm of Darkness). You do not want to be there. Invoke the Light and attain true enlightenement.

Why did you go? And where was this place exactly? How did you know it was hell? What characterized the so-called realm of darkness you speak of?

There’s no evidence that ‘hell’ exists and there’s no reason to fear such a place. The only thing I fear is ignorance.

Enlightenment comes through study, not invocation.

Ive got a better one than your “Do what thou wilt”. Its from Wicca and its called the Wiccan Rede.

Its the only “doctrine” in the religion, but it is seen as more of a guide. Morality summed up in 8 words. Even the Wiccans are more intelligent than Abrahamic religion.

Im not Wiccan by the way, I am an atheist of the philosophical variety, I don’t believe in religion because it bases life around death/judgement, In other words religion should be defined as “waiting to die”, and it also takes obedience to be morality. and I dont believe in god because belief in god deflects the responsibility of humankind to help themselves and those in need. What people are really feeling when they feel “gods presence”, is the freedom from responsibility/accountability.

I think Atheists would get through to more people, if they took a philosophical/moral approach rather than a scientific/practical approach. Dont get me wrong science is good, but it can come across as a little cold-hearted.

In the end it doesn’t matter what you believe in, but if everyone lived by the Wiccan Rede the world would be a better place.

Good points. For the truly self-interested, not directly or intentionally harming others is a better long-term strategy than causing serious or obvious harm. So for those who understand, “Do What Thou Wilt” already implies a harm reduction policy.

Having said that, it’s not possible to live in the world today and not cause any harm. The nature of competition means that there will be winners and losers. The games of power often require, to put it delicately, strategic disinformation. Economically, consumers in wealthy nations are harming the rural poor in China and other places who deal with toxic manufacturing by-products, low wages, etc. Right here in the U.S., migrant workers brave slave-like conditions in a legal limbo to pick our fruits and vegetables.

These are systemic conditions, to be sure. But very few people who benefit from these abuses are going to speak up and demand change–change that would take money out of their pockets. Just look how small of a niche so-called “fair-trade” products remain.

But it’s not just the structural evils. A lot of this stuff comes up in office politics, friendships, relationships and the like. Everyone participates in the game, and often self-righteousness (especially of the religious kind) is the best cover for the most devious players. What I’m saying is, lets all just admit what we’re doing and get on with it.

The surest route to poor ethics is denial. If you make an effort to become aware and admit to yourself what you’re doing, you can at least try to temper the worst of it with humanity.