It’s Not That Easy to Go Solar
LOGIN
Sunday, December 4, 2022
Top Posts
What’s Up With the Nazi “Black Sun” Rune Wheel?
Elizabeth Clare Prophet Claimed To Be ‘Clairvoyant’
The Eightfold Path of Denial of Death
Why I Left The Radical Secular Podcast
Miss R*EVOLutionaries: Panel Discussion
Money Is Not A “Shared Fiction”
Beliefs About God Won’t Make You Moral
This Is Not Fine!
Wealth Concentration Leads to Feudalism
Is Something Unclear About What’s Wrong With America?
SUBSCRIBE
Archive

Home Climate It’s Not That Easy to Go Solar 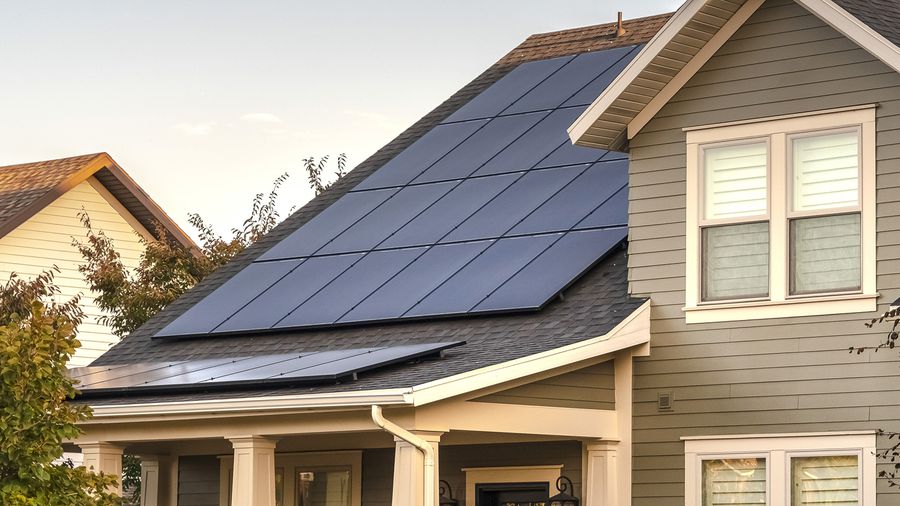 My home and place of business is, pure and simple, an energy hog. I use 2500 kWh per month. I have pretty and warm halogen light bulbs on dimmers in almost every socket. I have two central air-conditioning and heating systems, eight computers, assorted entertainment and video equipment, and a 1 hp swimming-pool pump. All this is powered by grid-connected primarily fossil fuel electricity. In the socially responsible category, I have donated over 14 years of computing time to the grid.org project for cancer and human proteome research. However, the rest of my electricity usage is purely for personal and business purposes.

I wanted to see how, and if, I could convert myself to a more energy efficient and renewable source. So I called up Premier Power, a solar energy contractor, to see what it would take to replace or supplement grid power with solar energy. A friendly and knowledgeable salesman called me, asked about my power bills, and told me I would need 75 solar panels to replace the energy I was using. This would be direct grid connection, whereby I sold my power to the grid when it was being produced. In return, when my solar panels were not producing power, I would be drawing it from the grid. This would result in a net-zero power bill.

I asked the contractor how much the system would cost, including government tax credits and incentives. He spent a few seconds calculating and told me it would cost about $100,000, and with the business and consumer tax credits combined, I might be able to get it down to $65,000. With grid power costing me about $250 per month, the payback was in a range of 12 to 15 years! I was somewhat taken aback at the high price, but I thought to myself “If this really were an emergency, I could take out a mortgage and do this.”

But then I got the real shock! The salesman told me that we were in the midst of a worldwide solar panel shortage, and that the soonest installation could begin would be January 2006, and that was not even guaranteed. I asked why the shortage? He said all solar panels being manufactured in the world right now are being shipped to Germany, because they’re willing to pay prices even higher than what he quoted me. Apparently, the German government has made a strong commitment to solar power. (Good for them!) So strong, in fact, that economists are concerned the incentives they’re paying are too high. In some cases, a German installer of solar generating capacity can receive up to $.70 per kilowatt-hour, which is about eight times the average US electricity rate. Obviously, people are buying panels up in droves.

Unfortunately, I think this is a taste of things to come. As the realities of Peak oil begin to set in over the next decade, we will see an unprecedented demand for alternative energy technology. It will simply be the only option. The problem is, that in a world of radically higher-priced oil, all manufacturing will be radically more expensive, including manufacturing of replacement technology for fossil fuel energy.

It would have been prudent back in the 1970s, when the US experienced its first oil shock, to invest in such technologies. But the petroleum industry had its tentacles wrapped around our economy and our psyche way too deeply. The continuation of cheap fossil fuel use DID make economic sense, since the energy content of petroleum products is so high and convenient. But it lured us into a false sense of security for over 30 years, and as far as a cheap and easy conversion we might have been able to achieve–that tanker has sailed.

Update: In the years after I wrote this, I continued to donate computer time to World Community Grid. Team Black Sun Journal has now donated a total of 33 years of computing time. I did cut my energy usage way down by replacing the HVAC systems, and the pool pump with more energy-efficient models, replacing ALL light bulbs with LEDs, and doing away with many of the inefficient computers and servers. In 2014, I was finally able to secure a solar power system for my home from Sunrun, that offset 60-80% of my electricity usage on an annual basis. It was done with a power purchase agreement (PPA), which means I do not own the panels or equipment, but rather pay a flat rate to Sunrun for power each month. It took roughly a year from when I signed the contract, to when the installation was complete and I had the PTO (permission to operate) from the utility (Los Angeles Department of Water and Power). I had a similar result on another home in Nevada, that took just under 6 months. In general, across the United States, there’s way too much regulation of the solar power sector, due to intense utility lobbying. Utilities view rooftop systems as competition. In many states, they are required to buy back the power produced by these systems, and in some cases have succeeded in establishing rates that are so low that the systems are uneconomical for customers. As it turned out, the major obstacle to solar energy conversion in the past two decades was regulatory, not the supply of panels. It’s tough for me to believe that nearly 20 years after I wrote this, only 3.2% of American homes have solar panels installed. That’s dismal. –Sean Prophet, August 2022